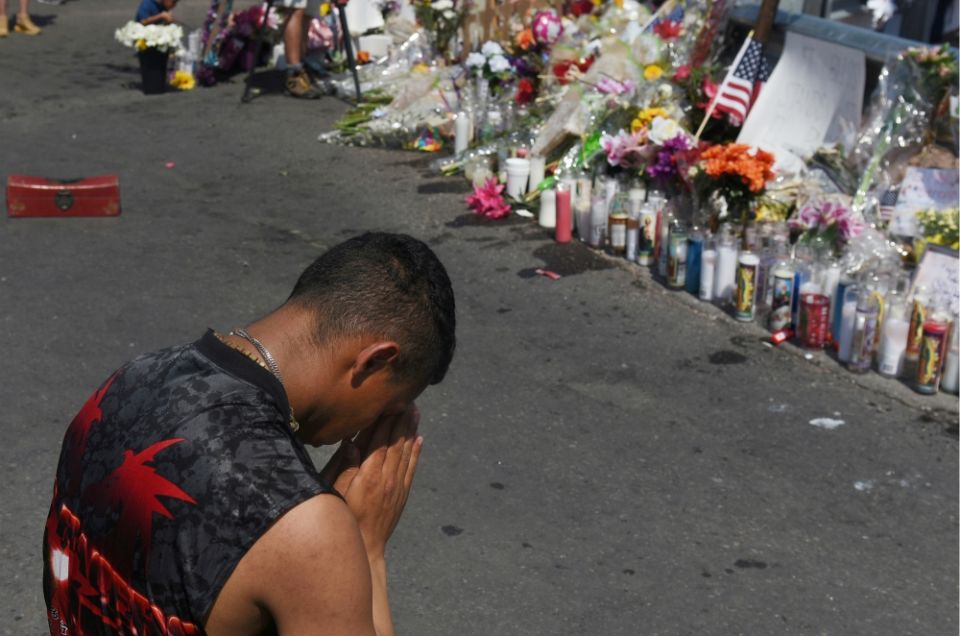 A man prays at a memorial Aug. 6, three days after a mass shooting at a Walmart store in El Paso, Texas. (CNS/Reuters/Callaghan O'Hare)

At Millennial, Dylan Corbett, director of the Hope Border Institute and a real model of faithful lay leadership in our church, reflects on the mass murder in El Paso and the fear that our president has stoked in the Latino community. Heartfelt and smart.

In The Washington Post, Marie Arana on the long history of anti-Hispanic animus in this country, dating back to the Founding Fathers when it was quite explicitly comingled with anti-Catholic bias. We look back on these incidents of racial hatred, and they are not the high points of the American story. Will we ever learn?

Also at WaPo, Aaron Blake articulates the question on the minds of many Democrats: They love Elizabeth Warren but they worry if she can win. Blake's analysis is not very exacting, nor is it grounded in history. I will look at this issue in greater depth tomorrow.

Another article about Warren, this one at New York magazine, by Rebecca Traister, argues that Warren is the most "professorial" candidate in history and delves into some of the stereotypes of women in the ambient culture. I think as America gets to know her, they will realize that Warren learned many of the most important lessons in her life outside of law school and before she was hired at Harvard. But it is funny that the only people who complain to me that Warren comes across as schoolmarmish are women themselves.

Also at New York magazine, Ed Kilgore paints the best case scenario for the Democrats: Texas goes blue. I recall after the 2010 census speaking with a bishop from Texas and I said to him, "It looks like in 20 years, Texas could be blue." Without a moment's hesitation, he replied, "Ten."

A frightening new study from the Brennan Center for Justice indicates that those counties with a history of discrimination have been at the forefront of efforts to purge voters from the rolls. The weakening of the Voting Rights Act of 1965 by the Supreme Court is, after Donald Trump's inhabiting the White House and Russian bots, the greatest threat to our electoral integrity. And it was entirely foreseeable.

At The New York Times, the editors ask why Florida Republicans are so eager to prevent people from voting. The question is rhetorical. Still, a modern-day poll tax is an abomination of a kind we thought we had consigned to history. I hope the good people of Florida, whose will on this matter was clearly expressed in a referendum last year, will rise up against this attack on the people's sovereignty. And if you thought Republicans were capable of putting principle before interest, you were wrong again.