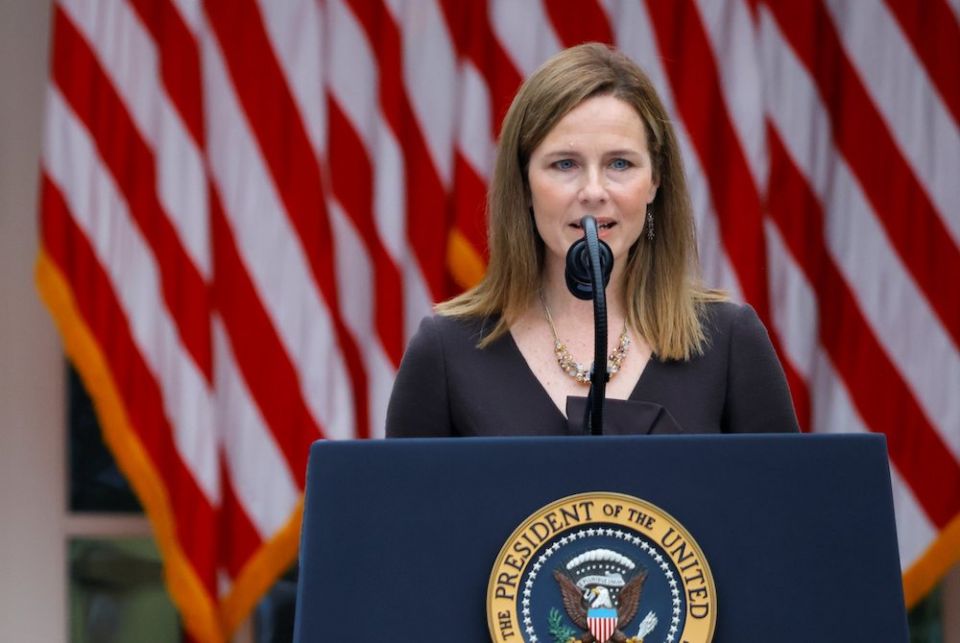 Federal Judge Amy Coney Barrett of the 7th Circuit speaks after being introduced by President Donald Trump at the White House Sept. 26 as the nominee to fill the U.S. Supreme Court seat left vacant by the Sept. 18 death of Associate Justice Ruth Bader Ginsburg. (CNS/Reuters/Carlos Barria)

In the Chicago Tribune, Cardinal Blase Cupich and Bishop Horace Smith of the Apostolic Faith Church, published a joint editorial about systemic racism and what we all can do to combat it. They draw the connection between justice and peace that the president and attorney general seek to obfuscate. And, unlike activists on all sides, they point past the Manichaeism that demands one person's victory entail another's defeat. Well done.

At The Washington Post, a look at Judge Amy Coney Barrett's participation in legal seminars designed to articulate a "distinctly Christian worldview in every area of law." Now, I would argue that legal scholars should engage in precisely such kinds of discussions because they might yield insights. I would also argue that such scholars should be prepared to answer questions about what they said and what they think now about such participation. The tax records show she gave five paid talks at the seminars, so she must have some pretty deep thoughts on the topic. If not, we can all ask about her ability to allocate her time. One talk, okay, but five talks on a subject you think does not actually have anything to do with being a judge? That seems like a lot of time to spend on something useless.

Also in The Washington Post, David Weigel on why conservatives want the nomination fight over Amy Coney Barrett to be about Catholicism. There is a warning here for all Democratic candidates: Do not take the bait, even when Planned Parenthood, Catholics for Choice and other pro-choice groups urge you to do so. They are interested in their own fundraising metrics, but candidates need to stay focused on winning the election.

If Democrats want to make sure they do not put a foot wrong during the Barrett confirmation fight, they should read Melinda Henneberger's splendid column at USA Today. She offers wise counsel to the intolerant on all sides: "Don't be the kind of hypocrite who embraces only those differences that line up with your own cultural views." Can I get an "Amen!"

At Fox News, Tennessee Sen. Marsha Blackburn discusses the pushback against the nomination of Barrett. She is wrong to call the opposition "petty," but she is not entirely wrong to say that it shows the contempt in which some conservative women are held by liberals. The most Salem-like judgmentalism of the left is found precisely here: When a person in a historically marginalized group does not embrace the narrative liberals peddle, that person is not just wrong but anathema. For all their complaints about "erasing women's voices," look at the way some pro-choice activists erase the voices of pro-life women.

There are few things I enjoy more than professors getting nasty with each other. At National Review,  Villanova's Michael Moreland attacks his colleague Massimo Faggioli, accusing Faggioli of leveling the "dual loyalty" charge against Barrett, mindful that it is a staple of anti-Catholic and anti-Semitic bigotry. I do not think Faggioli alleged dual loyalties but, instead, posed a legitimate question about a group for whom authority and secrecy are conceived in ways that run counter to the ethos of our democracy. The fact that Barrett did not disclose her membership in "People of Praise" during her confirmation hearings last time certainly raises a red flag for me. The fact that People of Praise has a website and contact information is hardly exculpatory: The spokespeople are not exactly forthcoming. Besides, a person's right to privacy is directly inverse to the amount of power they seek to have bestowed upon them. Barrett seeks to influence the highest court in the land for 40 years. I think we are entitled to know what she eats for breakfast.

From the AP, the recently retrofitted Mayflower II was supposed to be the centerpiece of lots of public celebrations this year, as we commemorate the 400th anniversary of the arrival of the Pilgrims. But then the coronavirus hit, and many of those celebrations were cancelled. (Fortunately, I was able to visit the ship with friends when she was in dry-dock at Mystic Seaport Museum in the summer of 2019. She is a beautiful piece of craftsmanship.) Some people are relishing the irony that a virus prevented these celebrations when the diseases the Pilgrims brought to America wiped out so many Native Americans.

Lastly, Happy Feast Day to me and to all the other Michaels, Gabriels and Raphaels out there! Here is a recording of the beautiful hymn "Ye Holy Angels Bright!" sung to the tune "Darwell" at Evensong at Canterbury Cathedral during a seminar for the Royal College of Sacred Musicians. Be sure to listen all the way to the fourth verse, not only because of the splendid descant, but because the lyrics are so exquisite:

My soul, bear thou thy part,
Triumph in God above:
And with a well-tuned heart
Sing thou the songs of love!
Let all thy days
Till life shall end,
Whate'er he send,
Be filled with praise!