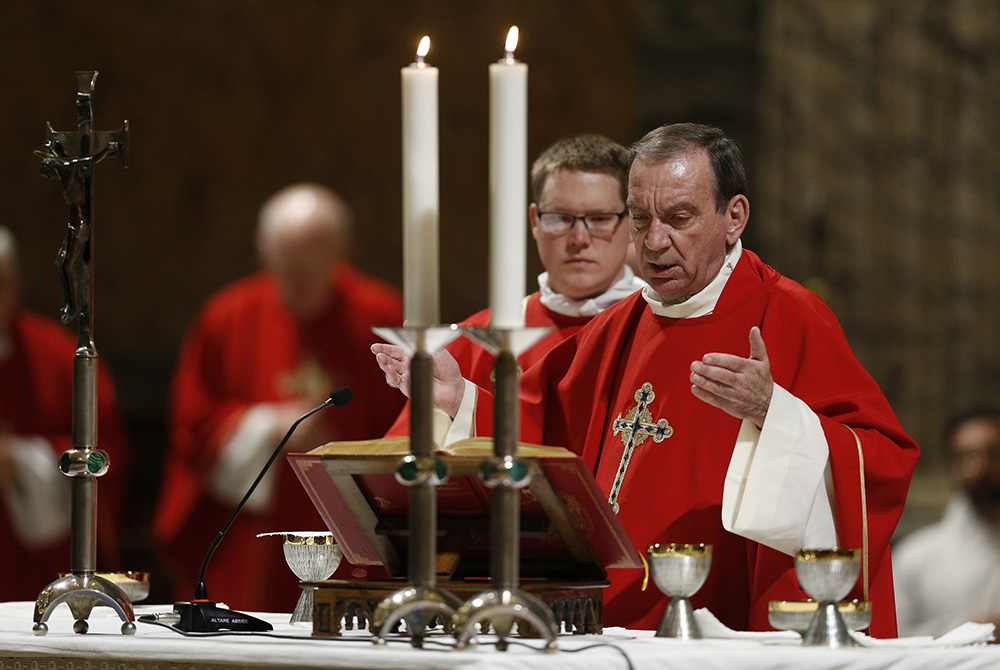 Archbishop Dennis Schnurr of Cincinnati concelebrates Mass with other U.S. bishops from Ohio and Michigan at the Basilica of St. Paul Outside the Walls in Rome Dec. 11, 2019. The bishops were making their "ad limina" visits to the Vatican. (CNS/Paul Haring)

Time for a little good news in the publishing world: Rowman & Littlefield has published the Third Edition of the Historical Dictionary of Catholicism by William Collinge, professor emeritus of theology and philosophy at Mount St. Mary's University in Emmitsburg. It is one of the books all religion journalists and most scholars should have on their desk, not even on their shelves, but on their desk. If more people remember to consult a smart, thorough and thoughtful book like this, rather than relying on Wikipedia, the world would be a lot better informed.

From WHIO in Cincinnati, Archbishop Dennis Schnurr said he would not have given his approval to President Joe Biden appearing at a town hall on the campus of Mount St. Joseph University had he been asked. The archdiocese would not elaborate on Schnurr's reasons. I am disappointed by this. Schnurr always struck me as the kind of bishop who would recognize the crimped ecclesiology that thinks hosting the president of the United States somehow compromises our Catholic identity, especially when that president is so obviously a good man, even if he happens to be very wrong on a very important issue.

In The New Yorker, Masha Gessen profiles Lyubov Sobol, an aide to imprisoned dissident leader Alexey Navalny, who is trying to carry on his work. If you want to know what courage and determination look like, you have only to examine the lives of these Russian patriots, fighting a corrupt government.

The Super Bowl winners Tampa Bay Buccaneers went to the White House and quarterback Tom Brady had some good fun at the expense of Donald Trump. Anyone want to guess how long it takes for Trump to diss Brady? CNN has the video.

Being Senate majority leader is one of the most powerful positions in Washington, but it isn't an easy one, as Sen. Chuck Schumer is realizing. He has to balance the desires of a more progressive House with the electoral needs of moderate Senate Democrats and the ability of Senate Republicans to obstruct anything and everything. Politico takes a deep dive into the challenges he faces.

At Classic FM, a selection of 12 classical music pieces associated with the Olympics. I had never before heard Michael Torke's "Javelin," which is a short and lovely piece, or Philip Glass' "The Olympian" which left me cold. I am not sure why the list did not include the song "Barcelona," written by Freddie Mercury and Mike Moran, recorded by Mercury and the great Monserrat Caballé, and which was a theme song for the 1992 Summer Olympics. Also not sure why they include John Williams' "Olympic Fanfare and Theme" which he composed for the 1984 summer games in Los Angeles, but not his less militaristic "The Olympic Spirit," composed for the 1988 Summer Olympics in Seoul.