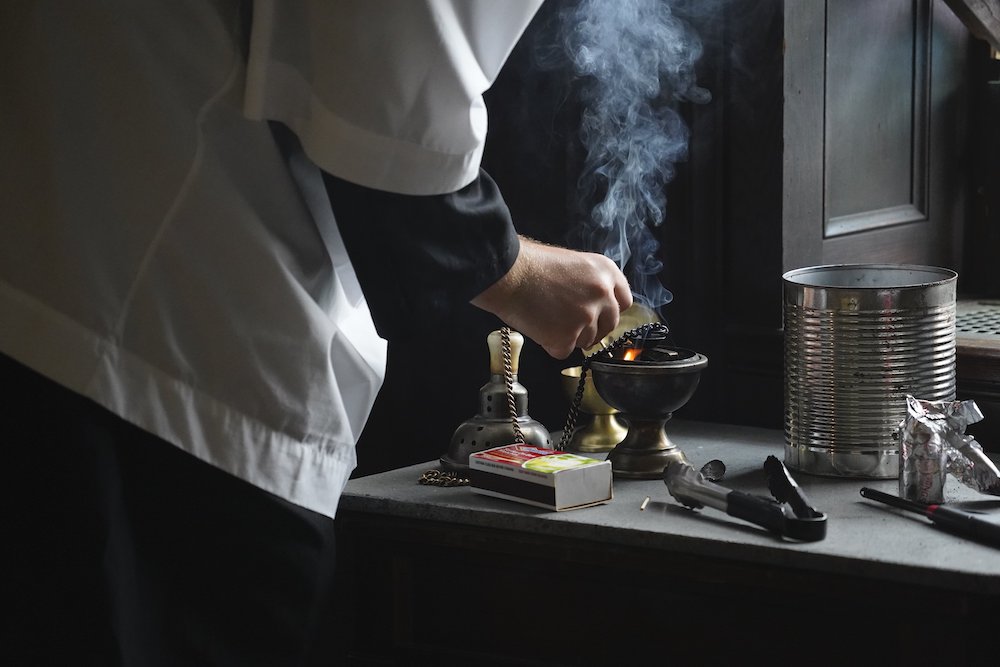 An altar server prepares a censer for use during a traditional Latin Mass July 1, at Immaculate Conception Seminary in Huntington, New York. (CNS/Gregory A. Shemitz)

At The New Yorker, a look at "Know Your Enemy," the podcast about conservative politics and ideas hosted by Commonweal's Matt Sitman and Sam Adler-Bell, who freelances for a variety of magazines. I do not know Adler-Bell, but Sitman is hands-down one of the brightest stars in the journalistic firmament and the fact that he has chosen to toil in the Catholic journalistic vineyard is a blessing to the intellectual apostolate of our church beyond measure. How wonderful that The New Yorker discovered their work and wrote such a glowing review! Congrats Matt and Sam!

At Business Insider, a report on Amazon founder Jeff Bezos offering to cover the first $2 billion in costs of a new lunar landing module if NASA will take away the contract they awarded to his competitor and award the contract instead to his company. Can someone explain to me how this is different from a bribe? Is there anything Bezos thinks he cannot purchase?

Coattails? CNN reports that Republican state Rep. Jake Ellzey has won a special election in Texas for a seat in Congress that came open upon the sudden death of Rep. Ron Wright. Ellzey defeated the former congressman's widow, who was backed by Donald Trump. If Trump can't sway a special election in Texas, why are congressional Republicans afraid to even distance themselves from him?

The problem with "riding the tiger" is that you go where the tiger wants to go. Florida Gov. Ron DeSantis has been one of Trump's most fawning acolytes, a real champion of the belligerent, faux-populist style. Now, as COVID-19 numbers in his state go through the roof, he is encouraging people to get vaccinated and, guess what? The anti-vaxxers are calling him a "sellout." Politico has the story.

A report from Catholic News Service claims that Pope Emeritus Benedict has criticized the church in Germany. I am very leery of such reports. The former pope lives a very isolated life and his gatekeeper, Archbishop Georg Gänswein, has near total control over who gets to see Benedict, what information is brought to him, etc. The fact is we do not know how much of a report like this one reflects Gänswein's thinking and how much reflects Benedict's.

At Sapientia, the online journal of the Center on Religion and Culture at Fordham University, the center's director David Gibson discusses the "Latin Mass Hysteria" that followed Pope Francis' decision to reintroduce the restrictions on the Tridentine rite. The devotees of the old rite are noisy but few, and they should not be allowed to hijack the conversation about the direction in which the church should move.

The president of the French Republic, Emmanuel Macron, visited French Polynesia for the first time. As is custom in that beautiful part of the world, those welcoming him gave him a floral necklace, what in Hawaii is known as a lei. The result? Follow the short video to the end and prepare to laugh really, really hard.