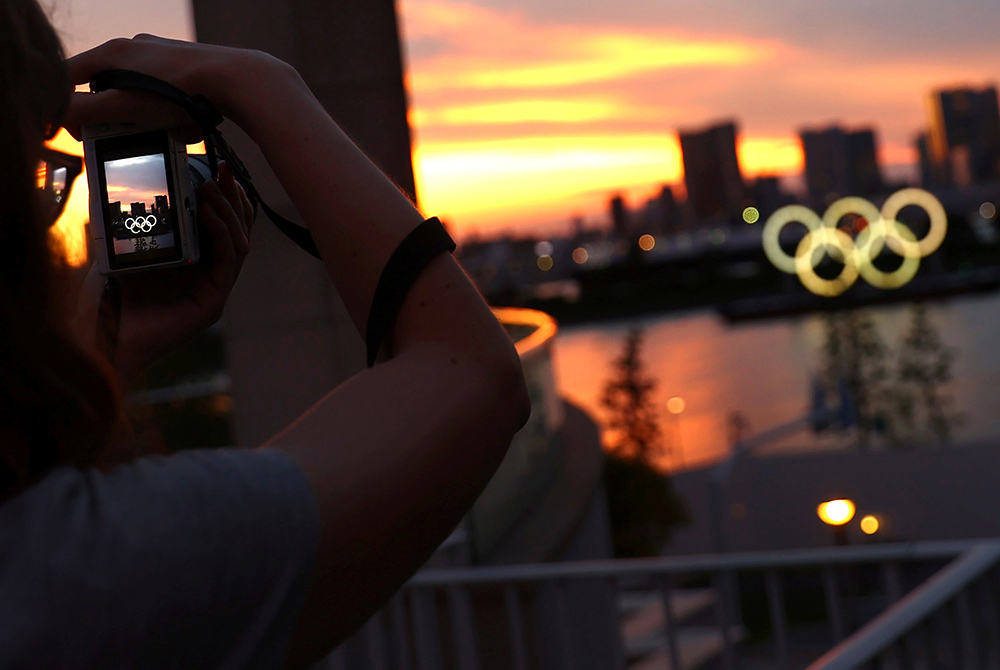 A person photographs the Olympic Rings in front of the skyline during sunset July 20 in Tokyo, three days ahead of the official opening of the 2020 Olympic Games. (CNS/Reuters/Kai Pfaffenbach)

Almost everything is surreal about the Tokyo Olympics, which opened Friday night. Although our calendars tell us it is 2021, the signage still reads "Tokyo 2020." The fact that most Japanese people wanted the games canceled so the country could focus on confronting COVID-19 serves as a kind of emotional cloud hanging over the venues, which, of course, sit empty of spectators. The excitement generated by both the ceremonies and the competition seems reduced by a lot without the cheers of the fans.

Calls for the Olympics to be ended entirely, such as this op-ed by Pete Sweeney for Reuters and this essay by Natalie Shure for The New Republic, have been pronounced in the past few weeks. It is true that the Olympics have been a source of corruption through the years, often leaving host cities with a mountain of public debt. Yet these breathless commentaries have the feeling of writers more intent on beating their breasts than thinking through an issue.

Sports are never entirely free from politics, including the Olympics. For all the talk about "bringing the world together," the water in the water polo pool at Melbourne in 1956 was red after Hungary and the Soviet Union clashed in the final, mimicking the violence on the streets in Budapest when the Red Army suppressed an attempt to overturn the communist regime. The Soviet invasion of Afghanistan in 1979 led to many Western countries boycotting the 1980 Olympics in Moscow, and the Soviets returned the favor four years later, sitting out the 1984 games in Los Angeles.

It was not only the Soviets who got the Olympics embroiled in politics. In 1936, Hitler saw the Berlin Olympics as a propaganda opportunity, but Black American runner Jesse Owens disproved the Nazi theories on the racial supremacy of the Aryans, winning four gold medals. The 1972 Olympics in Munich were meant to showcase the changes in Germany: The architecture of the venues was less monumental, and pastel colors were used on the flags bearing the logo to contrast with the black and red of the Nazi swastika flag. But Palestinian terrorists broke into the Olympic Village and killed two Israeli athletes immediately, took nine others hostage and then killed them at the airport when German police tried to free them.

In 1968, at the Mexico City games, Tommie Smith and John Carlos gave the Black Power salute during the playing of "The Star-Spangled Banner," and their careers were ruined, but we have come to learn their stories in recent years and view their protest in a more favorable light. Outside of Mexico, few have grappled with the massacre at Tlatelolco's Plaza of the Three Cultures 10 days before the opening ceremonies of those Olympics, when protesting students were gunned down by the Mexican military. When I visited the great city a couple of decades ago, I went to that square and prayed for the victims. There was a large memorial to the victims but they had not yet opened the memorial museum at the site.

I was lucky enough to attend the 1976 Summer Olympics in Montreal with my dad. We went to see gymnastics, swimming and diving, track and field, and rowing, but the real winner for me was team handball, a sport I had never witnessed. It is like water polo without the water. It was fascinating, fast and physical, and because the sport is virtually unknown in this hemisphere, you could get tickets to as many games as you wanted.

Four years later, I went with a group of friends from high school to the Winter Olympics in Lake Placid. We saw Eric Heiden win one of his five gold medals in speed skating, and watched the U.S. hockey team beat Romania, a win that propelled them into the famous "Miracle on Ice" win against the Soviet Union, and then the gold medal win over Finland in the final. Watching the ski jumping competition is one sure-fire way to keep your heart in your throat for an entire morning.

One of the best parts about attending the Olympics was meeting people on the street and in restaurants. Most countries produce special pins, and the host country makes pins for each of the sports, and trading them while standing in line to enter the arenas was great fun. In Lake Placid, which is a small town, you would even run into the athletes on the street too, especially at night when everyone crowded around the dais for the medal ceremonies.

What I learned in those two trips was something the naysayers forget: The Olympics are fun. In the 17 years I did not have a television, I can't say my life was empty because I was not watching them, but when I did get a TV, I enjoy watching the competition.

The absence of fans made me think these Olympics might be a wash, but then, last Thursday, news broke that the U.S. Olympic team has selected basketball legend Sue Bird and baseball player Eddy Alvarez to jointly carry the U.S. flag at the opening ceremonies. If you grew up in Connecticut like me, Sue Bird is sports royalty, having led the Lady Huskies to an undefeated season and national championship in 2002. As a sophomore, she had also helped lead the team to a national championship in 2000. Alvarez is unique for having competed in the 2014 Sochi Winter Olympics as a speed skater, winning a silver medal in the relay race. All of a sudden, I remembered that the Olympics is mostly about the athletes — and such athletes.

If you have not watched gymnast Simone Biles compete, you really are missing an amazing show: She makes these impossibly difficult routines look effortless. It is hard to believe men and women can run as fast as the athletes will run in the days ahead, or that anyone can throw a javelin so far, or pole vault so high. In the catalogue of human achievement, sporting success tends not to last as long as, say, a great piece of music or a sculpture of exquisite artistry. The records we thought would never fall — Babe Ruth's single season home run record or Bob Beamon's long jump in Mexico City in 1968 — they do fall, but we still listen to Mozart and we still stand before Michelangelo's "David" in awe.

Sports are not only a form of human achievement, they are fun to watch. The next two weeks, kick back and enjoy the show. I shall. It will continue to be strange and surreal because such are the times in which we live. But these young people from around the world have been training their hearts out for this competition and, whether these Olympics should have been postponed, they weren't, so we might as well enjoy the show.