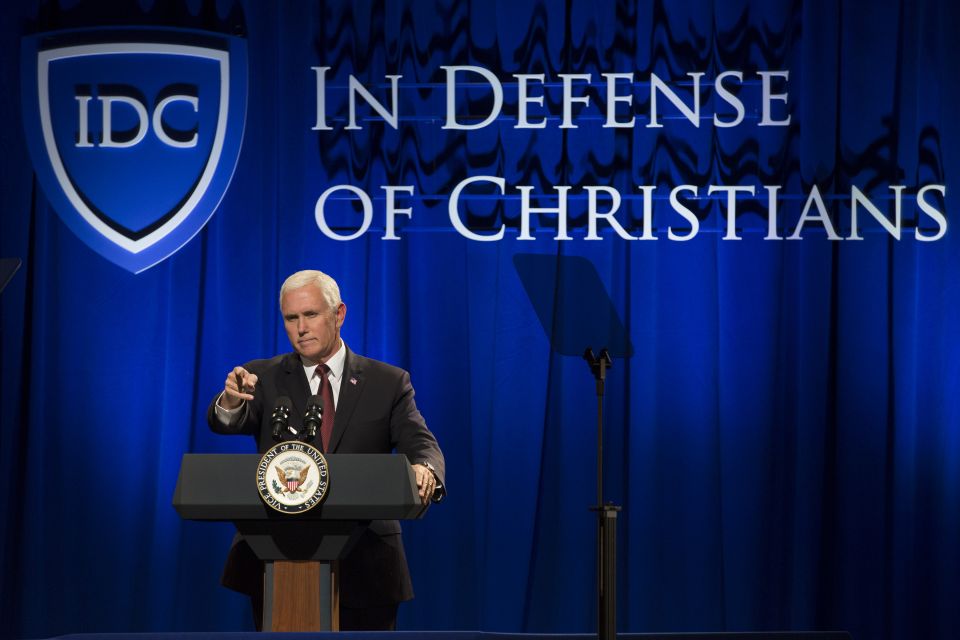 If you want to know what is wrong with contemporary evangelical Christianity, Liberty University's graduation ceremony last weekend explained it all. The school and its president, Jerry Falwell Jr., welcomed Vice President Mike Pence who gave the keynote address and brought along, to great applause, the congratulations of the president of the United States, Donald Trump. The president delivered the address two years ago, his first graduation address as president.

Pence's remarks were not, shall we say, excessively intelligent. But from his opening reference to the "20,000 liberty-loving 'Champions for Christ' " through his concluding paragraph about making America great again, it epitomized a way of being religious in America today that is so unself-critical as to be dangerous. From its fundamentalist roots at the beginning of the last century to its embrace of Trump today, evangelical Christianity in this country is a mockery of the genuine article.

"So the American economy is soaring, and you all ought to know that prosperity didn't just happen," Pence said. "Since day one of our administration, President Trump and I have been advancing the very principles and values that you studied and learned here at Liberty — principles and values that are making our country strong and great again." He did not explain the connection between economic success and "principles and values." Still less did he explain precisely what "values" Donald Trump has restored to American leadership. I would be interested to see that list.

"You're entering an America where you have a president and an administration that is standing strong for all the liberties we cherish: the freedom of speech, the freedom of religion," the vice president told the graduates. "And we stand without apology for the sanctity of human life." I am sure the failure to mention the freedom of the press was an oversight, just as I think it was incumbent upon the vice president to add that the administration stands "without apology for the sanctity of human life" unless that life is Mexican or Honduran or Muslim. Then, dignity schmignity.

Pence recounted his personal conversion story. Such accounts should be free from criticism.

"The truth is, we live in a time when the freedom of religion is under assault," Pence said. "Yesterday, I was informed by the U.S. Commission on International Religious Freedom that today Christians suffer more persecution around the world than any other religion.  In fact, the United Kingdom released a report just last week that said persecution of Christians worldwide is 'near genocide levels.' " You see how he slithered from one issue, freedom of religion which, of course, must extend to Muslims as well as Christians, to a singular concern with the persecution of Christians. He went on to mention attacks on synagogues and the attack on mosques in Christchurch, New Zealand, so he knows there is more to it than that. Not to be picky, but if Pence is so concerned about religious liberty, why did he not speak out against Trump's effort to ban Muslims from entering the U.S.?

The hardest part to stomach, because it is so familiar to us Catholics, was when Pence played the martyr, saying "we live in a time when it's become acceptable and even fashionable to ridicule and even discriminate against people of faith. … throughout most of American history, it's been pretty easy to call yourself Christian. It didn't even occur to people that you might be shunned or ridiculed for defending the teachings of the Bible. But things are different now.  Some of the loudest voices for tolerance today have little tolerance for traditional Christian beliefs.  So as you go about your daily life, just be ready. Because you're going to be asked not just to tolerate things that violate your faith; you're going to be asked to endorse them. You're going to be asked to bow down to the idols of the popular culture." Which idols do you think he means? The veneration of wealth? The golden calf of lower taxes? The reduction of Christianity to a prop for Americanism?

No. He means toleration of gays equals persecution of Christians, and he is not alone. Four committee chairs at the U.S. bishops' conference recently signed a letter with other religious leaders protesting the lack of specific religious exemptions in the proposed Equality Act, a bill that aims to extend the civil rights protections currently afforded to racial minorities to sexual minorities. "[T]he Equality Act would devastate the core ministries of a wide range of religious groups, especially those ministries that serve the most vulnerable," the letter stated. They skipped a step. The Equality Act doesn't tell anyone to shut down their ministries, only that they can't discriminate against gays and lesbians in deciding whom to hire and whom to serve, outside of ministerial positions. What the bishops are saying is that they would rather shutter our charitable ministries than provide dental insurance for the same sex partner of an accountant at Catholic Charities. I do not think you need an advanced degree in moral theology to recognize the inversion of Christian values in such a stance.

As I mentioned last week, both sides in these religious liberty fights are at fault for taking the most extreme position. The country would be better off if that gay Colorado couple had simply gone to a different baker just as the Catholic Church would be better served if some of its leaders had not been so intent on picking a fight with the Obama administration that they were willing to distort our teaching on what is, and is not, material cooperation with evil. (Hint: Buying health insurance is really never a form of cooperation with evil.) Yet, there was Pence, like the Catholic bishops, complaining about the treatment of the Little Sisters of the Poor at the hands of the Obama administration. I wish the Obama administration had not picked that fight, but I also wish the Little Sisters had been encouraged to consult a reputable moral theologian to assure them they could provide insurance that covers contraception without violating any "deeply held beliefs" or moral norms.

Funny, Pence did not discuss the importance of moral character in civic leaders. Thankfully, he did not get into that ridiculous evangelical argument that Trump's moral failings are irrelevant, just as King Cyrus being Persian did not keep him from accomplishing the Lord's work. Nor is it simply the president's personal moral failings, his disregard for truth, his triple violation of the mantra "one man and one woman for one lifetime" with which evangelicals once fought same sex marriage. His policies — indifference to the claimant environmental crisis, separating parents from children at the border, enriching the already wealthy by eliminating regulations that protect workers and communities, seeking to take away health insurance from millions of Americans — show a complete deviation from some of the most elemental ethical teachings of the Christian faith.

Is anyone surprised an ever increasing number of people are declining to identify with religion? Does anyone think it is mere coincidence that the rise of the "nones" began after the Moral Majority, led by Jerry Falwell Sr., had so altered the face of Christianity in the public square? Does not the alliance of the Catholic bishops in this country with this most reactionary version of Christianity, with its supercilious stance and its puerile theology, indicate the degree to which both iterations of Christianity have been conflated into politics? The answer is not to create a left version of Christianity that adopts all the most trendy tropes dribbling out of the academy, still less to embrace the centrality of sexual liberationism at the heart of today's Democratic Party ideology. No, it is time for that rarest of combinations, uncompromising faith and a searching, sophisticated engagement of that faith with the modern world. That was not on display at Liberty University last weekend. But, it is what happens day in and day out when the Holy Father goes to the pulpit of the chapel in the Domus Sanctae Marthae where he says his daily Mass. It is good to be a Catholic in the age of Pope Francis.

Column | Pence's address was everything that's wrong with evangelicalism today

Editorial: The politics of division stripped of any disguise