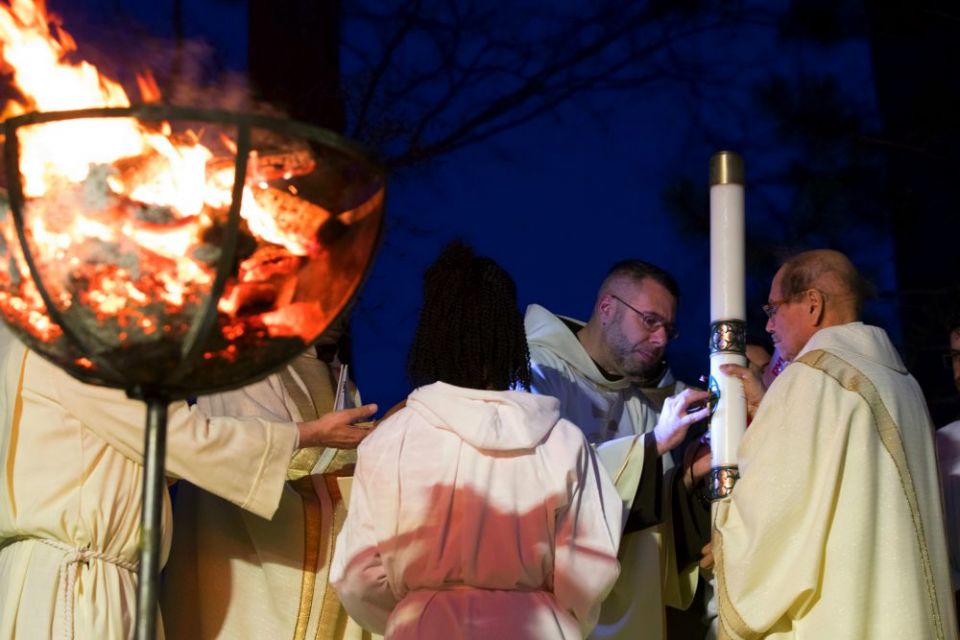 The symbols we employ during the sacred triduum have reminded us of their power in recent days.

The water of baptism is the foremost symbol of the paschal mystery. Water cleans the body and, in baptism, the unseen soul, taking away original sin and infusing the baptized with grace. Water is also a sign for formlessness before God created the world and from which he brought forth life. Water is also, as our friends who live and farm on the banks of the flooding waters of the Mississippi have learned, enormously destructive.

The great Easter Vigil starts with the lighting of the sacred fire, which pierces the darkness of the night and of sin, illuminating our hearts with divine love as it fills our churches with light that flickers off the mosaics and shines through the stained glass. Monday night, we were reminded that fire can destroy, as flames spread across the roof of Notre Dame Cathedral, filling our souls with sadness instead of light.

I admit to a certain bias, but I think words are always powerful. The words of the Easter triduum — "Take and eat, for this is my body," "My God, my God, why have you abandoned me?" "Why do you seek the living among the dead? He is not here. He has been raised" — are as familiar as any words in Scripture, yet they still pack a punch. In the climactic scene of the novel Brideshead Revisited, the dying Lord Marchmain, so long the scoffer, so long unwilling to admit that his pleasure was a sin, is unconscious and his daughter brings in a priest, Fr. Mackay, who gives the last rites and says the words of absolution. The narrator of the tale, Charles Ryder, who had not wanted to call for a priest at all, who had framed that decision as a choice between science and superstition, nonetheless prayed for a sign:

"God, if there is a God, forgive him his sins, if there is such a thing as sin." I suddenly felt the longing for a sign, if only of courtesy, if only for the sake of the woman I loved who knelt, I knew, praying for a sign. It seemed such a small thing that was asked — the bare acknowledgement of a present. A nod in a crowd. I prayed more simply: "God forgive him his sins and please, God, make him accept your forgiveness." So small a thing to ask. [Charles and the others watch as Lord Marchmain makes the sign of the cross and then lapses back into unconsciousness ] Then I knew the sign I had asked for was not a little thing, not a passing nod of recognition. And a phrase came back to me from my childhood, of the veil of the temple being rent from top to bottom.

The rending of the veil of the Temple, like the crucifixion it completed, happened once and for all, yet in the three days that begin tonight, we believe that we can yet participate anew in this great mystery, not as a bystander asking for a sign, but as a disciple who has already acknowledged that to which the sign refers.

The words of absolution Fr. Mackay prayed over the dying Marchmain would have been in Latin, of course, but our contemporary English words of absolution are as powerful as any ever written: "God the Father of mercies, through the death and resurrection of his Son has reconciled the world to himself and sent the Holy Spirit among us for the forgiveness of sins. May God give you pardon and peace and I absolve you from your sins in the name of the Father, and of the Son, and of the Holy Spirit. Amen." Those words are as powerful as the flames that brought down the roof of Notre Dame, as powerful as the waters of the Mississippi, as powerful as anything we can conceive.

If Pope Francis had done nothing in six years but remind us of the power and centrality of God's mercy in the life and doctrine of our faith, he would have accomplished more than any other pope of the modern era. In our unforgiving culture, we had almost forgotten God is Mercy Incarnate, just as we had forgotten the roof of Notre Dame was made of wood.

Last month, the Tablet ran a splendid cover essay by Fáinche Ryan about the Book of Kells, the great medieval manuscript (circa 800) that contains the four Gospels set in some of the finest calligraphy in the world. That epoch was once called the "Dark Ages." Ha! Ryan highlights the imagery of folio 34r, known as the Chi Rho page, explaining the imagery of the diamond shape at the center of the Chi, pointing out the head of Jesus at the end of the Rho, inviting us to notice the small Eucharistic host between the mice and the cats at the foot of the Rho, this last symbolizing the fact that Christ brings peace and salvation to all creation. Ryan writes: "To both the scribe composing, and to the readers over the generations, the message is clear. Christ has come into the world, now all is different. Incarnation, resurrection, salvation, eternal life are promised to those who embrace this message."

The symbols of the triduum — the water, the fire, the oils, the words — are more than symbols. Tonight, when the priest says, "This is my body. … This is my blood," the bread and the wine truly become our Eucharist, the body and blood of Christ. When we go to confession on Good Friday, and the priest says the words of absolution, our sins really are absolved. At the vigil, when the priest pours the water over the catechumens and says the formula of words, the catechumens really are baptized. The symbols are powerful, but they are also sacraments, and they point to what is more real than anything we humans can imagine, more real than this changing world, more real than all our scientific theories, more real than the timbers of Notre Dame or the waters of the Mississippi, more real than the screen upon which you are reading these words and which you can touch with your own hands. Christ has come into the world, now all is different. A blessed triduum to you all.

A prayer for Ukraine (and the world)