Shea explains how politics, culture distort our understanding of Catholicism

Mark Shea's new book The Church's Best-Kept Secret: A Primer on Catholic Social Teaching is not the most sophisticated theological book you will read this year. But, if you were starting a conversation in your parish, and your parish is filled with right-of-center Catholics like Shea, this is a great book to help people realize the ways our politics and culture in the U.S. has distorted our self-understanding of Catholicism. 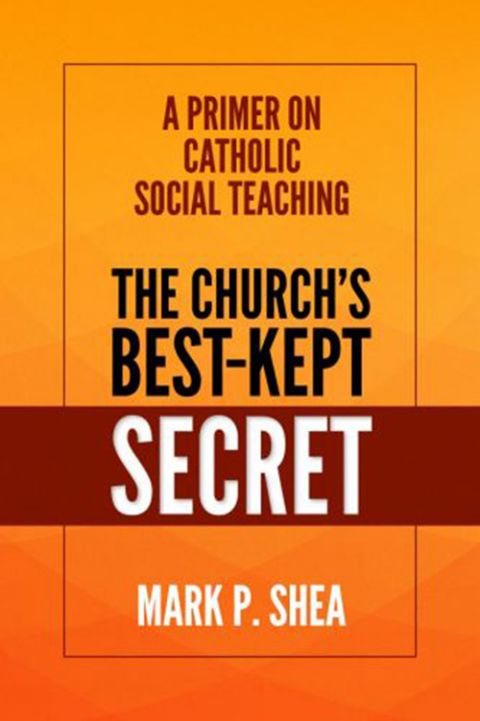 Shea's particular gift is to state clearly what the church teaches, and then expose those distortions of the teaching. So, for example, he explains the complex theology of cooperation with evil and that we cannot do evil, even if good comes from it. Shea distinguishes the moral belief that "we may … try to lessen evil in an imperfect world without achieving perfection, but we cannot deliberately choose to do evil on the theory that our opposition to some other greater evil (like abortion) gives us license to indulge an evil we are willing to tolerate."

He then writes: "This subtle distinction eludes many people, who have effectively embraced a theory of morality which holds that opposition to abortion taketh away the sins of the world." You can sense his exasperation and, at the same time, admire his turn of phrase.

Shea has equally snarky words for those who equate defending the church's teaching on abortion with Catholic identity itself. "Somebody who says, 'We need to address the sadistic cruelty being meted out to refugee children, snatched from their parents at the border and disappeared into a concentration camp system that cannot even figure out how to unite them with those parents again' is not 'diluting the brand' of the Church's teaching, nor 'distracting' from abortion. They are simply being consistent about the Dignity of the Human Person from conception to natural death."

His analysis is spot-on as he considers other morally important issues that get shunted aside by the "abortion-only" crowd, and his snark is completely warranted.

Turning to the church's teaching on the common good, Shea explains how it is distorted by people determined to resist it. "[M]any fear that the Common Good is the Church's trendy nod to Marxism. In other words, they fear the concept of the Common Good is 1) a novelty (probably invented by Vatican II) and 2) something 'liberals' in the Church pit against the Dignity of the Human Person as the Marxist pits the collective against the individual." He then unpacks the ways church teaching is rooted in the Scripture, not in Das Kapital.

When Shea turns to consideration of the relationship between justice and charity, he continues his countercultural, supremely Catholic critique of many of the tropes adopted by conservative U.S. Catholics:

At this point, many get confused because they imagine that all help given to the poor is therefore "charity." So (the argument goes), it is fine for Christians to be personally generous to the poor. But what is the sense of involving the state in helping the poor? Aren't taxes just theft at gunpoint? And don't they simply mean that those who would have been able to freely give to the poor are now deprived of that opportunity by an overbearing state that forces them to be virtuous instead of letting them choose? Such arguments get repeated ad infinitum. But it is not Catholic teaching.

I am not sure whom Shea hangs around with, but I can assure him that in my circle of friends, such lame arguments are not repeated ad infinitum!

The fact that Shea does move in conservative circles, however, is what makes his book so refreshing. When he continues the discussion of the relationship between justice and charity by observing, "Here's the biblical truth: according to the Church, much of what we do for the least of these is owed, not charity," and goes on to cite Scripture, the Fathers of the Church, and the Compendium of Catholic Social Teaching promulgated by St. Pope John Paul II, you can close your eyes and imagining his conservative friends scratching their heads and, hopefully, rethinking their politics.

As noted, this book is not without its flaws. For example, in discussing subsidiarity, Shea contends that the church models this bedrock principle of Catholic social teaching in its own structure. "Again, the Church models what it seeks," he writes. "Each diocese on the planet is the local expression of the Church governed by the local bishop; nonetheless the Church is a global unity in union with the Holy Father."

Alas, we still live in the long shadow of the long 19th-century ecclesiology in which local churches exercise the authority they are permitted and Rome can intervene when it wishes. How much more quickly might the U.S. bishops have responded to the clergy sex abuse crisis in the 1990s, if John Paul II had not made it virtually impossible to laicize clergy who abuse children!

Similarly, I was glad to see that Shea examined the issue of structural sin, but I am not sure he recognized exactly why it is so pernicious. "Structures of sin make it hard to be good and often punish us for trying while blinding us from even being able to see the good," he writes. His example of Paul getting attacked by the Ephesians falls flat. Structural sin happens when virtuous decisions yield sinful consequences, for example when the desire to live in a nice neighborhood reifies segregated housing patterns, which, in turn, keep schools segregated in ways that disadvantage poorer children. Shea is right that the Gospel calls us to confront structural sin, but I think it is more pernicious than he allows.

In the final chapter, Shea provides a lengthy quote from C.S. Lewis, about how the devil seeks to ensnare souls, the key sentence of which is this: "On the other hand, we do want, and want very much, to make men treat Christianity as a means; preferably, of course, as a means to their own advancement, but, failing that, as a means to anything — even to social justice." These are words for all Catholic progressives to ponder.

Whatever the minor difficulties with this text, they are easily overlooked when you consider the source and his usually more conservative audience. Shea is fed up with much of what he has heard on the right field bleachers of the church, and he shares his frustrations with the rest of us. He speaks for a growing cohort of Catholics who, for example, are profoundly pro-life and thoroughly disgusted with the pro-life movement. He speaks to those who have caused the disenchantment. My hope is that they will listen to him, but my fear is that he will merely be branded a traitor to their political cause. There are worse fates for a writer to endure.

Clinging to a consistent ethic of life remains a moral imperative

Coronavirus, social distancing and the company of the faith