Trump: Another unconvincing stab at statesmanship 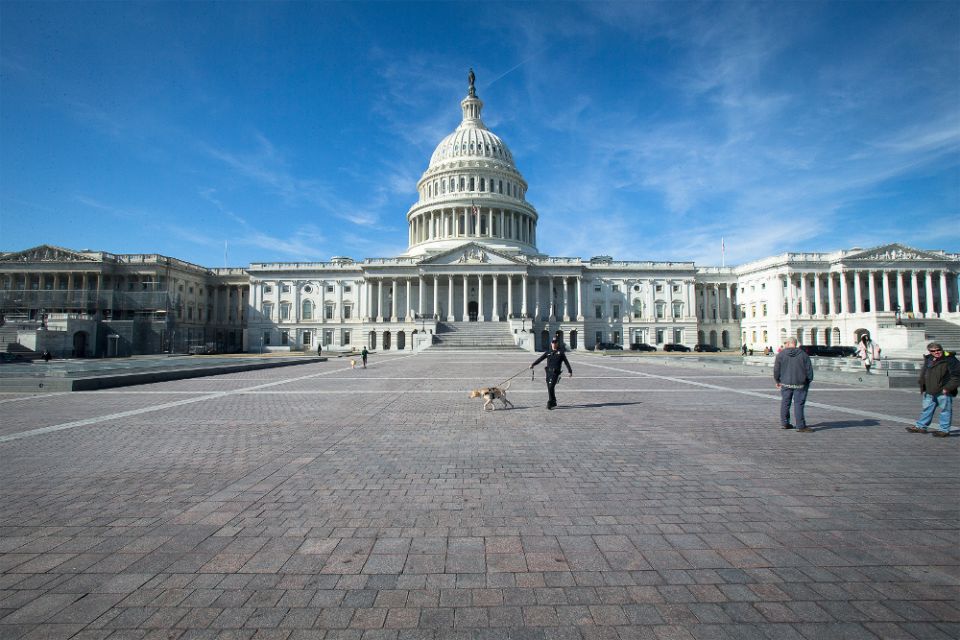 The U.S. Capitol is seen in Washington Feb. 5. (CNS/Tyler Orsburn)

In advance of last night's State of the Union speech, Washington Post columnist E.J. Dionne made a keen observation: "But Trump can never get too upbeat, because he decided long ago that his political project depends on inciting anxiety and anger as well as hostility toward (nonwhite) outsiders. This requires him to conjure a dystopian world because what he fears most is a world in which fear is abating."

This is the balancing act that has characterized this presidency: taking credit for anything good that happens, whether or not his policies are the reason, while stoking the kind of fear that makes the electorate seek a strongman. Last night, try though he did, Trump could not really keep his balance.

The president said he "hoped that we will govern not as two parties but as one nation." He said, "We must embrace the politics of cooperation, compromise and the common good." He called for Democrats and Republicans to support new infrastructure spending and to come together to lower the cost of prescription drugs. But, these fine words came from the mouth of the man who has done more to divide this country than any president in memory. This is the president who mocks the weak, demonizes desperate refugees and earlier yesterday insulted the memory of the late Sen. John McCain.

I could not help recalling these lines written by the great Leon Wieseltier the day after the 2016 election:

Isn't it rich? The apostle of anger now hopes that we rise above anger. Having employed divisiveness as his primary instrument, the president-elect now implores us to put an end to our divisions. In the name of post-electoral comity, we are supposed to forget what we know. At this moment, therefore, it is important to affirm the reality, and the inevitability, and even the nobility, of some of our divisions.

But, I did not have to look back to remember how strange it was to see Trump pretend to the role of national unifier. Within minutes, in the same speech, he was warning about "large organized caravans" of refugees, repeating the falsehood that immigration depressed wages and reduces jobs, and attesting to his heartfelt pain on behalf of the "countless Americans [who] are murdered by criminal illegal aliens." Speaker Nancy Pelosi and the majority of the House stayed seated.

Later in the speech, the president called for Congress to work with his administration to reduce the costs of health care and prescription drugs and, remarkably, "to protect patients with pre-existing conditions." I suppose he is hoping the country will forget that he tried mightily to repeal the Affordable Care Act, which repeal would have left those patients with pre-existing conditions to fend for themselves.

His words on abortion were vehement in a way no president has addressed the issue, attacking the recently passed abortion laws in New York and criticizing Virginia Gov. Ralph Northam's comments on a similar proposal in that state. The president actually mischaracterized what Northam said — and he needn't have done so as the original were terrible enough. But, alas, he must have known that no one would come to Northam's defense. Still, I could not help but think that the pro-life cause will suffer from its association with this amoral person who is our president.

The weirdest moment came when the president, having touted the strong economic numbers of the past two years, warned that the only things that could stop continued economic progress are "foolish wars, politics or ridiculous partisan investigations." Setting aside the fact that Special Counsel Robert Mueller is a lifelong Republican, it was unclear how the president's ever increasing legal jeopardy imperils the unemployment rate.

Will the speech make a difference? In an interesting column, also in the Washington Post, City University of New York's Ted Widmer noted that Trump is an excellent stump speaker:

At a rally, he can speak for hours, without notes, raging against his enemies, connecting with his audience. He's adept at pressing their emotional buttons, and even if he is not very religious himself, there is something evangelical about his style. He excites hope that crushing victories are coming, over strange and shadowy forces of evil. He moves around, filling the physical space, improvising. He promises anything that comes into his head — which may be one reason the White House does not release transcripts of his rally speeches.

But, Widmer notes, recalling last year's SOTU and Trump's mangling a speech at a military cemetery outside Paris last autumn, Trump is awful in a more formal setting, when reading from a prepared text. Widmer could have included the bizarre Oval Office address about the government shutdown and his perceived need for a border wall last month.

I expect the speech last night, like those other failed and formal addresses, did nothing to broaden his appeal. His calls for national unity will be lost with the dawn and the return of his Twitter attacks. He is a small man in a big job and his pretense at statesmanship was unconvincing. But, how could it be otherwise? We shall not forget what we know.