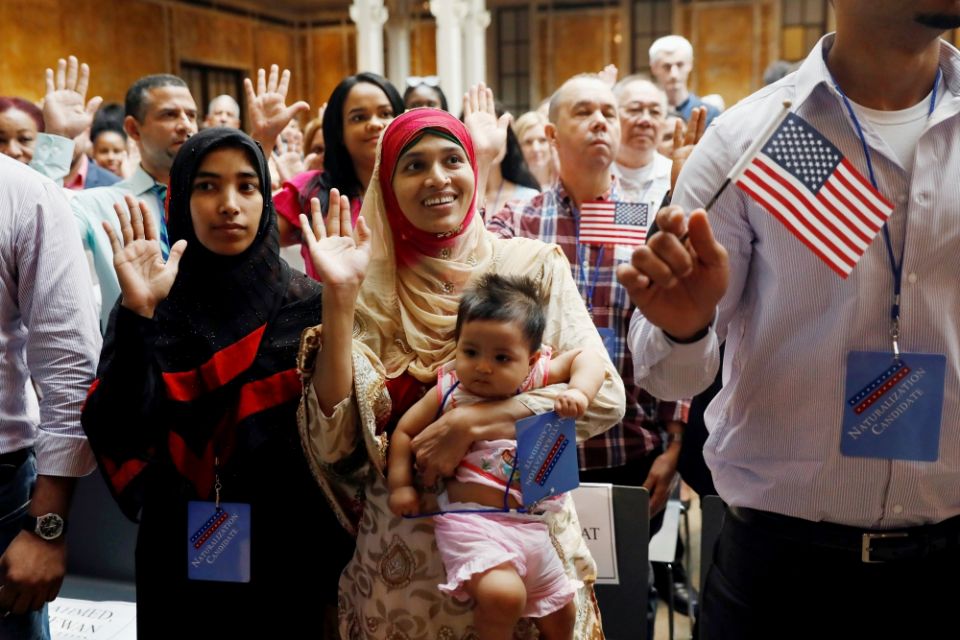 New citizens stand during the Pledge of Allegiance in July 2018 at the U.S. Citizenship and Immigration Services naturalization ceremony in the Manhattan section of New York City. (CNS/Reuters/Shannon Stapleton)

It did not hit me until the U.S. House of Representatives voted to condemn President Donald Trump's racist tweets on Tuesday. Trump really is making America great again.

The New York Times did the country the favor of publishing the text of the House resolution that condemned the president. Rachel Maddow read the entire thing to open her show the night of the vote. It is a remarkable document, citing key points in American history going all the way back to the Founders and filled with quotes, including from Franklin Roosevelt ("Remember, remember always, that all of us, and you and I especially, are descended from immigrants and revolutionists"), through John Kennedy  ("The contribution of immigrants can be seen in every aspect of our national life. We see it in religion, in politics, in business, in the arts, in education, even in athletics and entertainment. There is no part of our nation that has not been touched by our immigrant background. Everywhere immigrants have enriched and strengthened the fabric of American life"), finishing with the patron saint of pre-Trump Republicanism, Ronald Reagan ("one of the most important sources of America's greatness: we lead the world because, unique among nations, we draw our people — our strength — from every country and every corner of the world, and by doing so we continuously renew and enrich our nation").

The resolution is, in short, a civics lesson. It teaches that being an American is not about blood and soil, but about adherence to a set of ideas. It demonstrates the attractiveness of optimistic leaders. It reminds us about our history, about who we truly are. It instructs us on the necessity of tolerance and respect amid diversity. It teaches us, in short, why America is great.

Civics went out of fashion at some point before I attended high school. We had something called "social studies" and it was neither particularly interesting nor really instructive. It most definitely was vague. During my school-age years, I learned most of what I knew from books my parents brought me and from our annual summer vacations to Philadelphia and Valley Forge, Williamsburg and Monticello, Washington, D.C., and Gettysburg, Lexington and Concord and Plymouth. I was 10 years old when the movie "1776" came out, and while it was not the most sophisticated rendering of the Second Continental Congress, I learned all the songs by heart. I can still recall Ken Howard as Thomas Jefferson singing to John Adams, "You're obnoxious and disliked, that cannot be denied," and think of it when visiting certain conservative websites.

Then, I got to college in 1980, the same year Howard Zinn's A People's History of the United States was published. That book was not, in fact, a work of history, but a work of propaganda. Still, it came to define the outlook of way too many Americans of the left. Four years later, Jeane Kirkpatrick, a lifelong Democrat, stood at the rostrum of the Republican National Convention and gave a thunderous speech about the "Blame America First" Democrats. It was a caricature, but not entirely so.

Years later, when I worked on a congressional campaign and attended dozens of town committee meetings, peopled with the most active Democrats in their town, the vast majority of those local activists did not fit the "Blame America First" typology Kirkpatrick had outlined. But I do recall that the loudest of the town committee members were thoroughly imbued with Zinnism.

How disastrous was the perception of Democrats as somehow incapable of recognizing American goodness and greatness? Since Zinn published his tome, two Democrats have reached the White House, one with help from an economic recession and Ross Perot, and the other in the midst of the worst economic downturn since the Great Depression.

Trump is giving the Democrats the chance to finally shed the perception that they are all Zinnites. If only we can convince them to stop putting the words religious liberty in scare quotes, we will really be making progress.

I am not as gloomy as Todd Purdum, who, writing at The Atlantic, concludes that America's political system does not know how to grapple with someone like Trump. In one sense, that is true: Nancy Pelosi had to break a House rule to speak the truth about Trump's racism. (Kudos to Purdum for unearthing Jefferson's comments about the need for the kind of rule Pelosi broke, comments that completely vitiated the GOP rationales for attacking the speaker.) There are other examples of Trump's disregard for democratic norms showing our system was more fragile than first thought.

The House resolution demonstrated just how out of step the incumbent president is with what has truly made America great, and the degree to which there was once widespread consensus about at least some of the sources of that greatness. Trump's presidency is an opportunity for the Democrats to shed, not their criticism of our society to be sure, but their reflexive, knee-jerk Zinnism.

And if the Democrats can give themselves — and the more than half the country that does not approve of the president — a series of civics lessons in the next year and a half, I think their eventual nominee will have an even better shot at not only defeating Trump, but of defeating him soundly. And then she will be in a position to really lead the country forward.

How will the Republicans rediscover their connection with the traditional narrative of American greatness and values, and distance themselves from their extremes? Good luck with that. Watching the crowd at Trump's North Carolina rally chant, "Send her back" at the mention of the name of Rep. Ilhan Omar was creepy and scary. I hope — how I hope — that for most people there, attending a Trump rally is like attending a professional wrestling match, that the people know it is not real, that this is a staged confrontation between essentially fictional villains and heroes.

Problem is that this is not a wrestling match and Trump is not Hulk Hogan. The vast powers of the presidency are in the hands of a narcissist with fascistic tendencies. Irony is that he is putting a con job on his fans, convincing them that the Ilhan Omars of the world are the problem, while he and his fat-cat friends continue to rob the American people of opportunity and encourage them to abandon any shred of decency.

If the GOP has to wander in the wilderness a bit in the post-Trump era, so be it. It is critical that the Democrats have a positive vision of the future to communicate to the electorate. Otherwise, the entire campaign will be nothing but swapping epithets about race and gender, and I am not so sure that Trump would lose that fight.