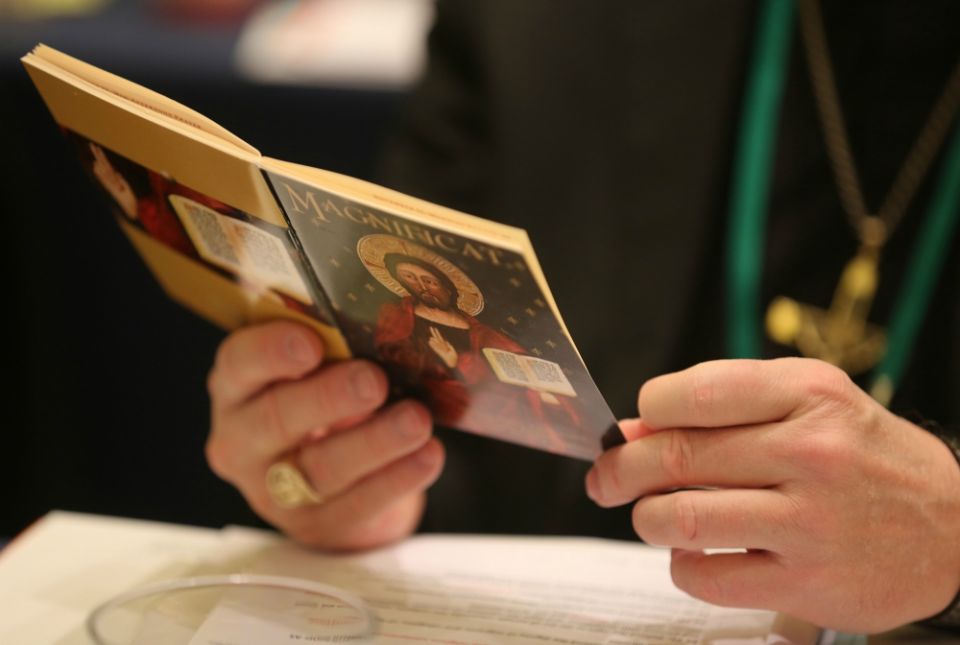 A bishop attends morning prayer at the fall general assembly of the U.S. Conference of Catholic Bishops Nov. 12 in Baltimore. (CNS/Bob Roller)

Preeminent: Adj. surpassing all others; very distinguished in some way.

This adjective was the focus of two debates at the heart of last week's bishops' conference plenary. It was added to the text of a new letter that will supplement the bishops' quadrennial, and apparently irrevocable, statement about elections, "Forming Consciences for Faithful Citizenship." The first had to do with U.S. politics and the second with Pope Francis.

The sentence reads: "The threat of abortion remains our preeminent priority because it directly attacks life itself, because it takes place within the sanctuary of the family, and because of the number of lives destroyed." The 143-69 vote not to include a longer quote from Francis that would have better balanced the preeminence of abortion indicates that abortion really is the top priority for the bishops — which is precisely why the change was wrong-headed.

The aim of the underlying document is to form consciences. Telling us what their priority is this election cycle does not help me form my conscience. The bishops do not say, because they cannot say, that abortion as a voting issue is preeminent: Earlier in the document approved last week, quoting Francis, they state that protecting "the lives of the poor, those already born, the destitute, the abandoned and the underprivileged, the vulnerable infirm and elderly exposed to covert euthanasia, the victims of human trafficking, new forms of slavery, and every form of rejection" are "equally sacred" as the " 'firm and passionate' defense of the 'the innocent unborn.' "

So, as I read the text and our theological tradition, the moral status of the abortion issue — as a political and social issue — is equally sacred to those other issues that concern an assault on human life and dignity.

In explaining why he wanted the change to "preeminent," Archbishop Alexander Sample of Portland, Oregon, unwittingly gave the game away: "We are at a unique moment with the upcoming election cycle to make a real challenge to Roe v. Wade, given the possible changes to the Supreme Court," he wrote. "We should not dilute our efforts to protect the unborn."

I knew the archbishop was an aficionado of the Tridentine rite. I had no idea he was an expert at political analysis, too. He should stick to Latin: Overturning Roe v. Wade before accomplishing the necessary change in cultural attitudes will produce a backlash the likes of which the pro-life movement has never seen. Remember the reaction to Alabama's restrictive abortion law? Imagine that nationwide.

There are deeper problems with the document, problems that demand the bishops start from scratch next time, and not just the fact that the text does not reflect the papal magisterium on political issues of Francis or Pope Benedict XVI. The exclusive focus on issues, originally seen as a way of avoiding partisanship, has instead brought the ideological divisions of the politicians into the life of the church. Instead of recognizing the underlying thrust of Catholic social teaching — for example, its concern that a hyperindividualism, or erroneous autonomy, inevitably degrades important social bonds — the current listing of issues, and seeking to prioritize them, inevitably involves political calculations the bishops have no competence in making. It allows for the perception, and perhaps the reality, that the majority of bishops see the church as an extension of the Republican Party.

You can tell the bishops are not really that interested in forming consciences when you reflect upon the fact that there is only one bland sentence in this new letter about voting for people with good character: "At all levels of society, we are aware of a great need for leadership that models love for righteousness (Wisdom 1:1) as well as the virtues of justice, prudence, courage and temperance." What Mary McCarthy once said of Lillian Hellman — "Every word she writes is a lie including 'and' and 'the' " — can be applied to our president with only a change of verb from "writes" to "tweets" and a change of pronoun. Character matters.

Voters do not get to vote on a particular issue. We select from a list of candidates. We need to consider not only where they stand on issues, but their character and their competence as well. We might have agreed with Sarah Palin on this or that issue, but her vast ignorance meant that voting for her was irresponsible. Donald Trump may supply pro-life judges, but he is a vile and vulgar man, who knows no history and is uninterested in data, who disgraces the office of the presidency daily. The bishops fail to help Catholics understand how to weigh these different considerations.

Mark my words: Apologists for Trump will be citing the word "preeminent" from now through election day. The bishops knew that and voted for it anyway. Francis famously wrote in Amoris Laetitia: "We have been called to form consciences, not to replace them." The majority of the U.S. bishops seem more interested in getting Trump reelected than in forming consciences.

Which leads to the second focus of debate: The majority of bishops are perfectly willing to ignore Francis. They not only included this word, "preeminent," that runs counter to the holistic approach to issues he advocates, they have barely done anything to implement "Laudato Si', on Care for Our Common Home" and have done even less on Amoris Laetitia.

One bishop pointed out to me that in 1968, Pope Paul VI issued Humanae Vitae in late July and the bishops had a pastoral plan ready by that November. I am not one to think that an episcopal conference has to jump just because the pope says so, but for 35 years, those of us who respectfully raised concerns about certain papal statements were called cafeteria Catholics. By the standard of judgment applied during the pontificates of John Paul II and Benedict XVI, the majority of U.S. bishops are now in the cafeteria line.

My advice to Catholics next year? Reread Vatican II's Gaudium et Spes, John Paul II's Laborem Exercens, Benedict's Caritas in Veritate and Francis' Laudato Si'. If you are ambitious, include Pius XI's Quadragesimo Anno. Although this last was issued in 1931, it strikes me as timelier than "Faithful Citizenship." Then make up your mind and vote for the person you think will best serve the many and varied interests in this country, and begin to restore dignity to the Oval Office.

A version of this story appeared in the Dec 13-26, 2019 print issue under the headline: US bishops not that interested in forming consciences .

Column | US bishops are not really that interested in forming consciences

Will the bishops follow Pope Francis in New Orleans?

Mercy sister: We can make things better with the spirit of Catholic social teaching

Mass and lunch: Pope to lead celebration of World Day of the Poor