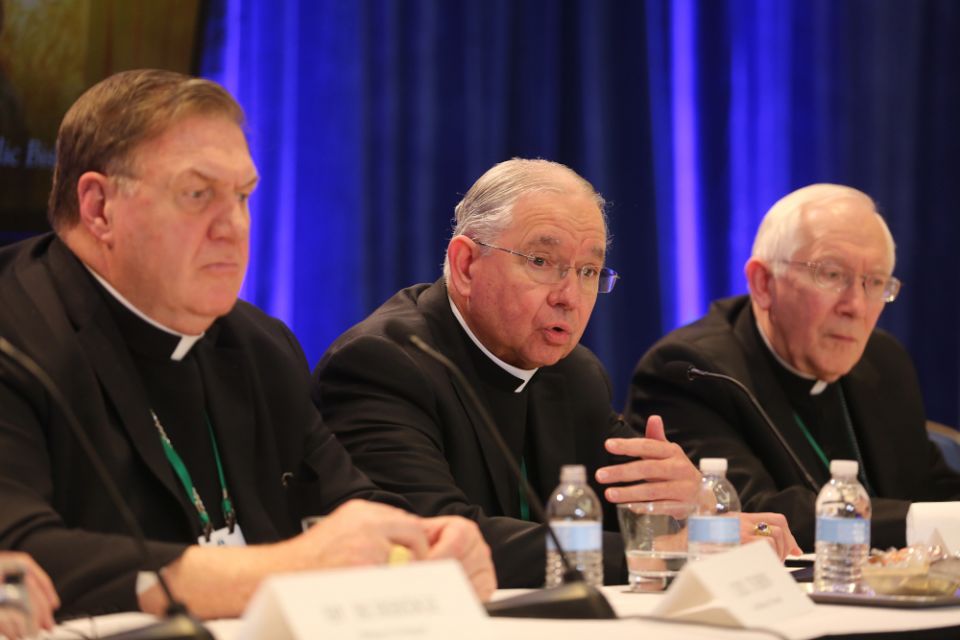 Los Angeles Archbishop Jose Gomez, president-elect of the U.S. Conference of Catholic Bishops, responds to a question during a news conference at the fall general assembly of the U.S. bishops' conference in Baltimore Nov. 12. Also pictured are: Cardinal Joseph Tobin of Newark, New Jersey and Archbishop Leonard Blair of Hartford, Connecticut. (CNS/Bob Roller)

Baltimore — For the past six years, the dominant drama at each plenary meeting of the United States Conference of Catholic Bishops has grown out of a singular question: To what degree have the U.S. bishops, and the staff they have assembled at the conference headquarters in Washington, embraced the magisterium of Pope Francis and to what degree are they resisting his lead?

This year, for the first time, you could see Team Francis beginning to gain the upper hand. Until they didn't.

It was a foregone conclusion that Los Angeles Archbishop Jose Gomez would be elected as president of the conference. The current vice president, Gomez is liked by many of his brother bishops and represents the kind of conservative but pastoral approach to episcopal leadership that characterizes the majority of U.S. bishops. And, the selection of a Mexican-American immigrant as conference president sent a clear signal to the Trump administration that while the bishops welcome some of the pro-life initiatives from the administration, their defense of migrants will not be put on the back burner. Gomez is the first immigrant to lead the conference since Cincinnati Archbishop John McNicholas, born in Kiltimagh County, Ireland, served five terms as chairman of the National Catholic Welfare Conference in the first half of the 20th century.

The contest for the vice presidency was where the differences within the conference manifested themselves. The first tally had Detroit Archbishop Allen Vigneron in the lead with 77 votes. I had thought Oklahoma City Archbishop Paul Coakley would come in second place and he was close with 40 votes but Archbishop Timothy Broglio of the Military Archdiocese narrowly outpaced him with 44 votes. With no candidate securing a majority, they proceeded to another ballot in which Vigneron and Broglio were again in the lead but short of a majority. Under the bylaws, the last ballot was a direct face-off between the top two vote getters, and Vigneron defeated Broglio by a vote of 151-90.

The bishops dodged a bullet. When the Vatican releases its report into the rise of former cardinal Theodore McCarrick, you can bet one name that will be frequently mentioned is that of Cardinal Angelo Sodano, former secretary of state under Pope John Paul II. Sodano was critical in shielding serial pedophile Fr. Marcial Maciel Degollado from punishment. He also is implicated in the corruption of the church in Chile, where Sodano served as nuncio during the dictatorship of Gen. Augusto Pinochet. And, Broglio served as Sodano's top aide from 1990 to 2001, that is, when McCarrick was raising boatloads of money for the Vatican and when the decision to promote him to Washington was made. 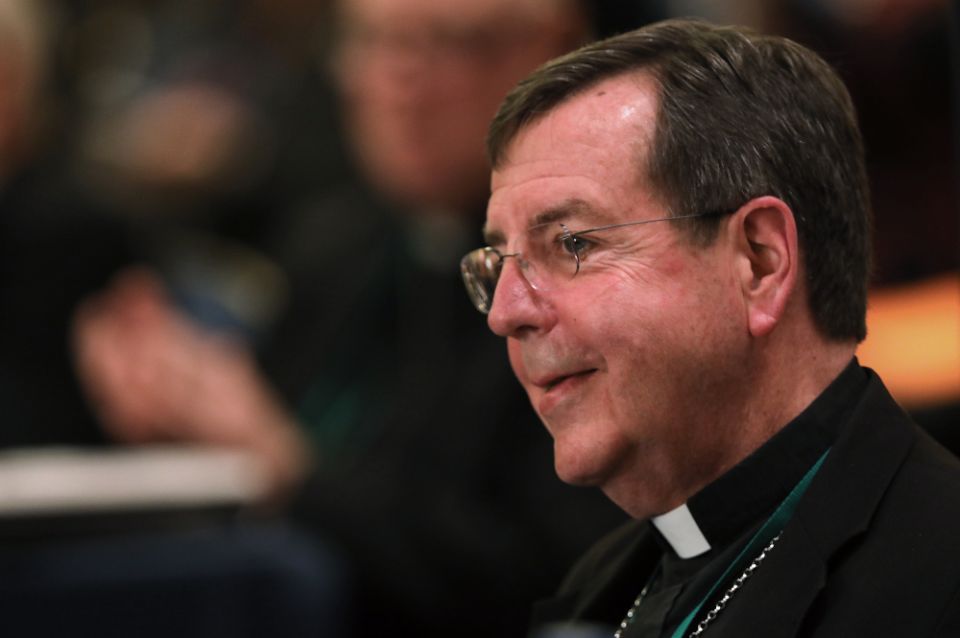 Detroit Archbishop Allen Vigneron smiles after being named the new vice president of the U.S. Conference of Catholic Bishops during the fall general assembly in Baltimore Nov. 12. (CNS/Bob Roller)

Vigneron is no liberal to be sure. After Archbishop Carlo Maria Viganò launched his attack on Pope Francis in August 2018, Vigneron issued a statement that made no effort to defend the pope. His seminary is a hotbed of anti-Francis sentiment. But, the conservative bishops who backed Vigneron, however, did not think through the implications of their vote. He is already 71 and while he could run for the top spot in three years, he will be one year shy of the mandatory retirement age. An emeritus cannot serve as president of the conference, so bishops will think twice about electing him to the post. In three years, Team Francis might have the votes to win conference elections and they might not be forced to deny a sitting vice president the traditional ascent to the top spot.

Of the elections for committee chairs, the clearest ideological choice came in the vote for a new chair of the Committee on Ecumenical and Interreligious Affairs. Bishop Steven Lopes, of the Personal Ordinariate of the Chair of Peter, the nationwide ordinariate for those parishes that were once Anglican but which came to Rome as the Episcopal Church drifted to the left, faced off with Memphis Bishop David Talley, who has led the conference's anti-poverty Catholic Campaign for Human Development. The arch-conservative Lepanto Institute has long argued that CCHD was insufficiently Catholic. Talley won by only 123-114 votes, but it marked the first time a demonstrably pro-Francis bishop defeated a bishop more closely identified with traditional elements in the church.

The debate over Forming Consciences for Faithful Citizenship also demonstrated the divide between Team Francis and those who prefer the culture warrior approach. The working group that drafted the statement declined Chicago Cardinal Blase Cupich's proposal to include an entire paragraph of Francis' Gaudete et Exsultate rather than merely a few sentences surrounded by paraphrasing. This was the first mistake: Gomez, who chaired the working group, should have insisted Cupich's amendment be adopted. Excluding something the Holy Father wrote is not a good look for a man who was just elected to be president of the conference.

Cupich asked for reconsideration, and San Diego Bishop Robert McElroy seconded but also objected to the inclusion of the adjective "preeminent" in this sentence: "The threat of abortion remains our preeminent priority because it directly attacks life itself, because it takes place within the sanctuary of the family, and because of the number of lives destroyed." The mood in the room began to change and, in the end, Cupich's amendment was voted down 133-69. The nuncio's address just yesterday, urging the bishops to "reflect prayerfully" on their communion with the pope, and to make his magisterium better received in the U.S. church, was forgotten.

In the lead up to this meeting, the leadership of the conference issued a statement criticizing Austen Ivereigh's new book Wounded Shepherd. Perhaps instead of criticizing it, they should read it, specifically when he discusses Francis' letter to the Chilean bishops as they began their meeting in Rome to reflect on their complicity in the sexual abuse of children. He writes:

[The letter] began by recalling God's original favor and mercy, asked the bishops to recognize where God had been rejected in favor of idols, and invited them to come home. The Church in Chile had once been prophetic, outward focused, courageous, and holy. Because it put Christ at its center, it evangelized; because it was close to the people and humbled enough to confess its sins, it was joyful; because it defended the poor, it generated holiness. But then it went astray. It turned in on itself, becoming clericalist, elitist, authoritarian, and internally divided. In trying to save itself, the institutional Church had usurped the consciences of the faithful, recoiling from God's holy, patient, and faithful people, "the Church's immune system."

I wish the U.S. bishops would consider how those words apply to them, and not only to the bishops in Chile. Of course, at the end of their reflection, the entire Chilean episcopate placed their resignations in the pope's hands. Hmmm.