US bishops ignore Vatican letter on Communion in an astonishing way 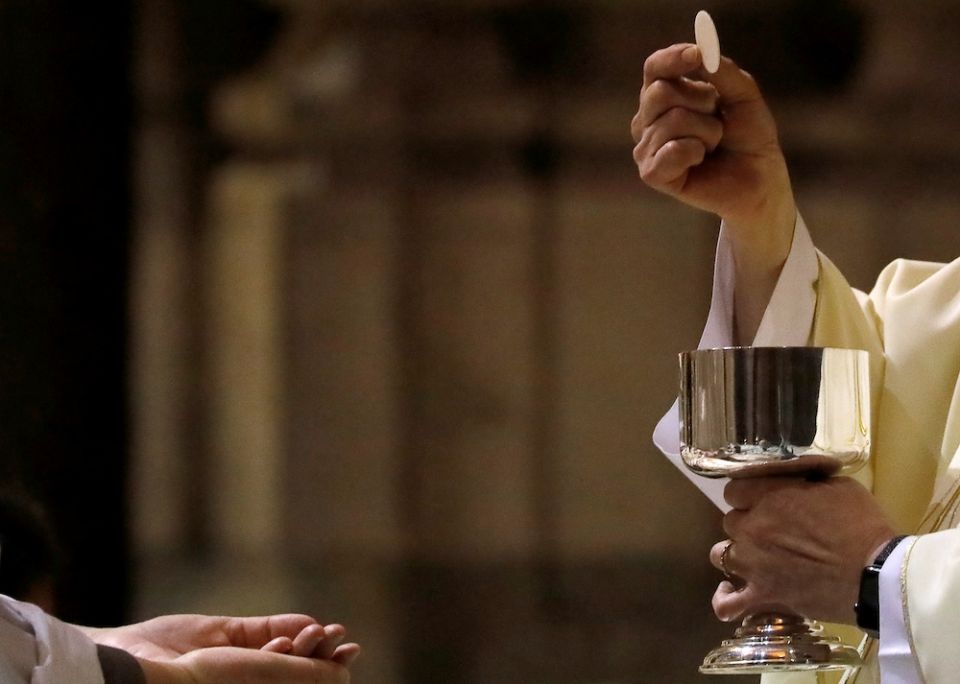 You would have thought that a straightforward letter from the prefect of the Congregation for the Doctrine of the Faith, Cardinal Luis Ladaria — urging the bishops of the United States to slow down their rush to adopt a document about pro-choice politicians being barred from holy Communion, advising them to engage in a serene dialogue with each other and to consult with the episcopal conferences of other countries — would be enough to slow down that rush to adopt such a document.

And you would be wrong.

The president of the U.S. bishops' conference, Los Angeles Archbishop José Gomez, sent a memo to his brother bishops, explaining that the conference followed usual procedures in deciding to schedule a vote on whether or not to task its doctrine committee with drafting a document on this controversial issue. The letter and memo were leaked to The Pillar, presumably by someone close to Gomez, and it shows that the Ladaria letter is being ignored or misrepresented to a degree that is astonishing.

In his letter, Gomez sums up the plan so far:

Accordingly, Most Reverend Kevin C. Rhoades, Chairman of the Committee on Doctrine, asked the Administrative Committee in March 2021 for time on the June Plenary Assembly agenda to ask this initial question [Do the bishops want his committee to draft a statement on eucharistic coherence? (insert mine)] of the body. The Administrative Committee approved that request. Since, then, the Doctrine Committee met to develop a brief outline to propose to the body in June. Its outline reflects recent guidance from the Holy See. The completed Action Item was approved by the Executive Committee on May 17 and then provided to you in the usual format. I am also attaching it to this letter for your convenience.

Where does this reflect the principal thrust of Ladaria's letter, to slow down? The strategy is not subtle: It is to get the bishops to approve the drafting of a text, to have the text ready for November, and to make sure that rest of the bishops think that to demonstrate their commitment to the pro-life cause, they will have to adopt the document.

Gomez further states that "the focus of this proposed teaching document is on how best to help people to understand the beauty and the mystery of the Eucharist as the center of their Christian lives." That's funny because, according to The Washington Post's Michelle Boorstein, Archbishop Joseph Naumann, chair of the bishops' pro-life activities committee and one of the principal movers of this whole mad rush to adopt a document, told her "the new effort is urgent because of what he calls a 'different climate' on abortion."

That tracks with what Portland Archbishop Alexander Sample said when he successfully urged the bishops to label abortion their "preeminent" political concern at their 2019 plenary meeting. Sample explained the addition of that adjective not by referencing any development of doctrine. This was about politics: "We are at a unique moment with the upcoming election cycle to make a real challenge to Roe v. Wade, given the possible changes to the Supreme Court. We should not dilute our efforts to protect the unborn."

Ladaria wrote that, "dialogue among the bishops be undertaken to preserve the unity of the episcopal conference in the face of the disagreements over this controversial topic. The formulation of a national policy was suggested during the ad limina visits only if this would help the bishops to maintain unity."

NCR obtained a copy of a letter signed by some 67 bishops asking Gomez to set aside any further discussion of this proposal until the bishops have a chance to discuss it in person, not at a Zoom meeting. Gomez's decision to proceed anyway does not accord with the standard definition of the word "only" in Ladaria's repeated instruction to formulate a policy on denying the Eucharist "only if this would help the bishops to maintain unity."

Ladaria proposed a two-stage dialogue: first among the bishops and then between the bishops and the pro-choice politicians in their jurisdiction. It is only after those two stages are complete, according to Ladaria, that the bishops "would then face the difficult task of discerning the best way forward for the church in the United States to witness to the grave moral responsibility of Catholic public officials to protect human life at all stages."

Did I miss the first stage? The second? And, apparently, Gomez and his buddies do not think this is a difficult task at all. They view discernment the way Admiral David Farragut viewed taking Mobile Bay: "Damn the torpedoes … Full speed ahead!"

Ladaria said that, having completed the two-stage dialogue and the "difficult task of discerning," any resulting statement "would need to express a true consensus of the bishops on the matter." Is it not obvious that no such consensus exists?

Ladaria warned against restricting the focus to politicians, writing, "any statement of the conference regarding Catholic political leaders would best be framed within the broad context of worthiness for the reception of Holy Communion on the part of all the faithful, rather than only one category of Catholics, reflecting their obligation to conform their lives to the entire Gospel of Jesus Christ as they prepare to receive the sacrament." The outline from the doctrine committee states it will consider "a special call for those Catholics who are cultural, political or parochial leaders to witness to the faith."

Ladaria urged Gomez to also deploy "every effort" to consult with other episcopal conferences, but the outline does not mention any such effort has taken place nor is one in prospect. As my colleague Christopher White reported, the U.S. bishops' conference (USCCB) is the only bishops' conference that is walking down this divisive sectarian road. 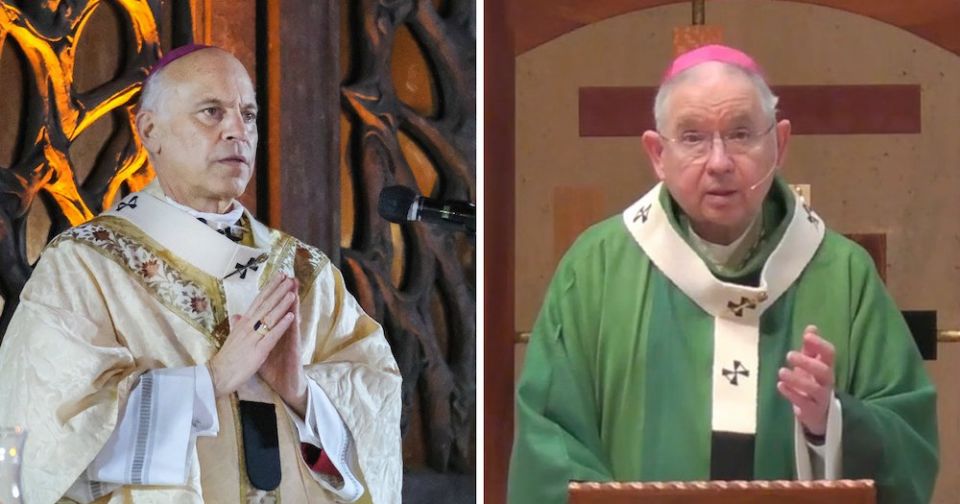 I cannot bring myself to believe Gomez is simply mendacious. The situation is more complex than that. I have no difficulty believing his fellow Californian, San Francisco Archbishop Salvatore Cordileone, is at least complexly mendacious.

"I'm deeply grieved by the rising public acrimony among bishops and the adoption of behind-closed-doors maneuvers to interfere with the accepted, normal, agreed-upon procedures of the USCCB," Cordileone said in a statement provided to the EWTN-owned Catholic News Agency on Tuesday. "Those who do not want to issue a document on Eucharistic coherence should be open to debating the question objectively and fairly with their brother bishops, rather than attempting to derail the process."

It is also hard to believe he is "deeply grieved." If he is, he should look in the mirror, as he has been one of the principal advocates of abandoning the 2004 USCCB statement, "Catholics in Political Life," for something more restrictive. Besides, do bishops not have a right to send a private letter to the president of the conference?

Cordileone misrepresents the letter sent to Gomez. It did not say there should be no discussion. It said a real discussion is well nigh to impossible on a Zoom call with over 200 bishops and asked that the discussion be postponed. His use of the verb "derail" is instructive: He, like Gomez and Naumann, have set the train on its way. They want to be able to push through a vote in June to instruct the doctrine committee to draft a text. In November, they will insist, as they did in 2019 when debating "preeminent," that the conference's commitment to the pro-life cause requires adoption of the document.*

Here is the problem. According to a report in Catholic News Service, among the signatories to the letter asking Gomez to set the entire issue aside until November was Cardinal Sean O'Malley of Boston. O'Malley has never supported denying Communion to politicians because of their stances on public policy issues. So far as I have been able to ascertain, he is also the only prelate who has attended every March for Life.

Do Cordileone, Naumann and Gomez really think that O'Malley's commitment to the pro-life cause is in question? Do they really think that any bishop in America is lukewarm about abortion? The issue is whether or not the Eucharist should be reduced to a pawn in the culture wars, a reward for good political behavior on the issue of abortion and only that issue.

If the Church of England was famously described as "the Tory Party at prayer," Gomez et al. would like the Catholic Church in this country to be "the Republican Party at prayer." What stands in their way, what has always stood in the way of this kind of politicized Christianity, in the way of all efforts to collapse the mysteries of faith into the purely ethical, is Rome.

* Editor's note: This article has been updated to correct the date of the U.S. bishops' meeting.

USCCB president's spokesperson leaves less than a year after her hiring

Returning to in-person Mass, will we be more attentive and intentional?