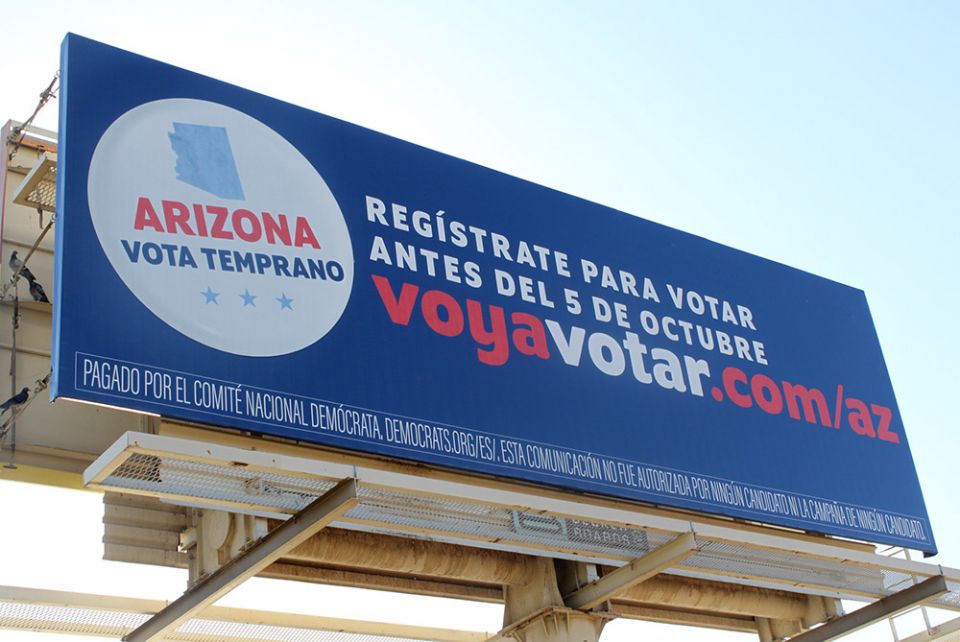 A billboard in Spanish encourages people to register to vote in Phoenix Oct. 1, 2020. (Dreamstime/Rebekah Zemansky)

Editor's note: This week, NCR political columnist Michael Sean Winters looks at the Latino vote in the 2020 election and what it portends for the future of American politics. Read Part 1 and Part 2.

"Who is the Bull Connor of the immigration rights movement?" That was the question John Wilhelm, former president of the union UNITE HERE, posed over dinner to some of his principal collaborators in Washington 10 years ago, according to Fr. Clete Kiley, the union's director of immigration policy.

Wilhelm had been learning about UNITE HERE's organizers on the ground in Arizona, where SB 1070 had just passed, the controversial law that allowed the police to stop anyone they wished and ask for their immigration papers. He had liked the effort and the focus he had seen in the mostly young organizers in Phoenix, and wanted to know if his national team agreed that the union needed to make Arizona a priority.

"Sheriff Joe Arpaio," Wilhelm's dinner guests in Washington replied, which was the same thing he had been told by Brendan Walsh and the team in Phoenix. Soon, the union was working with immigrant rights groups and others to launch the "Adios Arpaio" campaign in 2012.

"We reached out to 250,000 Latino voters in Arizona," said Walsh, who is now the political director for the UNITE HERE Local 11 in Arizona. "We got them signed up for Arizona's permanent early vote list, so that election would officials would send them an absentee ballot every election. "In Arizona, vote-by-mail was already popular," Walsh told NCR.

Related: The Latino vote: It doesn't exist, but it will decide the future

"We had an opportunity to recruit Latino activists into the movement to get people involved," says Walsh. "Not just in ousting Arpaio but broader political engagement and union involvement."

In 2012, 4,000 high school students were engaged in collecting 35,000 voter registration forms, Walsh said. Arpaio was defeated in 2016 and eventually convicted of criminal contempt of court. Betty Guardado, one of the campaign directors in the "Adios Arpaio" campaign, was elected to the Phoenix City Council in 2019. The year before, the Democrats won a statewide Senate race when Kyrsten Sinema defeated Martha McSally. In 2020, Joe Biden won the state.

According to Walsh, UNITE HERE knocked on 900,000 doors during the campaign, targeting youth as well as Latinos. An alliance of progressive organizations formed "Mi AZ" and they also knocked on a million doors.

The importance of the door knocks can't be overemphasized, according to Victoria DeFrancesco Soto, assistant dean at the University of Texas' LBJ School of Public Affairs. Because of the pandemic in 2020, "in Texas and some other states, Democrats did not do face-to-face campaigning, which is vital when reaching out to hard-to-reach and hard-to-mobilize constituencies," she told NCR. 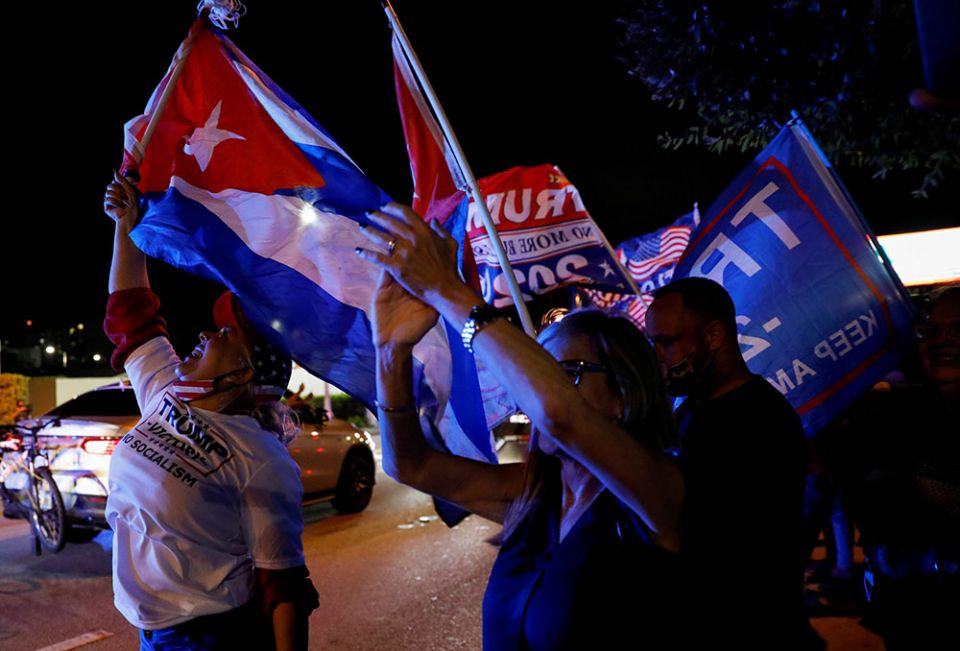 A supporter of President Donald Trump holds a Cuban flag in Miami during the presidential election Nov. 3, 2020. (CNS/Reuters/Marco Bello)

If Arizona was the great success story for efforts by Democrats to get Latino voters to the polls and vote for them, Florida was the letdown. The warning signs for Democrats in Florida were in full display in the 2018 midterm elections. Democrats rode a nationwide wave to retake the U.S. House, picking up 40 seats. In the Senate, however, the GOP gained two seats, one of them in Florida where the Democrats also failed to win the governorship.

"Woody Allen said that 80 percent of life is showing up, and operatives from both parties agreed that Florida Democrats have been remarkably slow to learn that lesson when it comes to Hispanic outreach," wrote Michael Grunwald and Marc Caputo in Politico. "Instead of organizing year-round, they've assumed demography would be destiny. Instead of selling progressive policies aggressively on Spanish-language media, they've assumed their positions on issues like immigration and health care would speak for themselves. And while Democrats are starting to put in more face time in Hispanic communities, Republicans are still doing a better job of nuts-and-bolts politicking with a demographic that is now one-sixth of the state's electorate."

If organizing is key to winning the loyalty of Latino voters, so is crafting a message that works. Before the election, Mark Jones, of the Baker Institute at Rice University, told the Austin American-Statesman, "a lot of Latino political elites, academic elites and members of the media tend to look at Latinos through the lens of African American voters," for whom a sense of collective identity — and a shared distrust of the Republican Party — trumps individual policies.

Related: Latino identities, always in the plural, and voting trends

Joshua Blank, research director at the Texas Politics Project at the University of Texas, told NCR that based on his surveys, "Trump's appeal is particularly strong with voters, Latino and otherwise, who value traditional family structures."

He added, "Order in society and order in the family — among a significant percentage of Hispanics that is an appealing message. It could be due to their Catholicism or to other things, but it is pretty apparent."

In January, Soto at the University of Texas' LBJ School hosted a webinar, "Unpacking the Latino Landscape: A Post-Mortem." I encourage everyone to watch the whole thing, as it was very instructive.

One of Soto's guests, Matt Barreto, politics professor at UCLA and founder of the polling firm LD Insights, which helps elect Democratic candidates, peeled the polling data like an onion to explain why Trump did better than many had expected.

The first problem is that some Democrats assumed Trump's anti-immigrant rhetoric would be enough to motivate Hispanics to vote for the Democrats. That assumption was wrong. Of course, on surveys and in focus groups, Latinos say they're for immigrant rights, Barreto said.

"I think sometimes we see that very high level of support of the immigrant experience and we overinterpret that to mean they are going to solely, single-handedly reject the Trump rhetoric," he added. "But what we found was that there is that heterogeneity there and some people, when they heard the four years of the Trump rhetoric, they became more anti-Trump and more pro-immigrant. ... Other people started to let it roll off of their back." 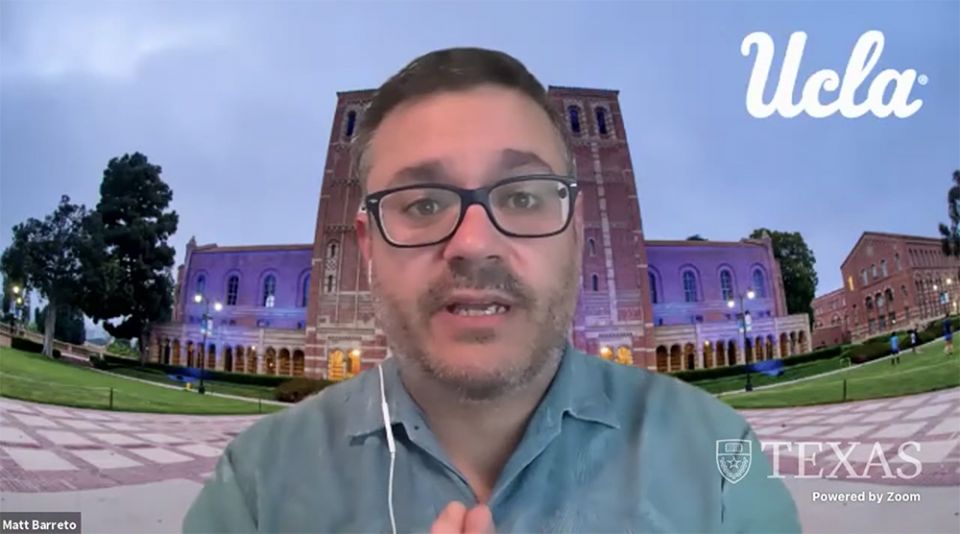 He added, "There are other issues on the agenda."

In fact, this past election, one issue really dominated all other political considerations. I will quote Barreto's comments at some length because they really explain how complicated it is to succeed at political messaging:

How we responded to COVID and the economy really took center stage. People were really struggling in the Latino community and in the immigrant community, and while they may have been bothered by some of those [anti-immigrant] statements, they really wanted to get their store back open, they wanted to get their family business back up, or they wanted to get mom and dad back to work. And so, while we thought we had the very effective message that looked good, and people "trusted science," and "wear your mask," and "let's take this seriously," there was also an undercurrent for some who said, "My single biggest priority is just getting the economy back open." And one of the things Trump was good at was just screaming the same thing over and over again. His messages were never that complex. And so he became associated with getting the economy back open and we became associated with — with some folks because, again, overall I think we did OK — with "let's just wait and see."

Upper-middle-class people in many sectors could afford to keep the economy closed and work from home. Many small-business people and other workers did not have that luxury. People who work in the information economy, which includes pollsters, academics and those who analyze elections, belong to the former group.

The University of Texas' Blank said that one of the problems Democratic campaigns have had in crafting winning messages for Latino voters, and for other voters too, has to do with their lousy polling operations. Everyone I interviewed for this series who mentioned polls complained about the small sample sizes used in evaluating the Latino vote.

Blank went further: "People who work in and around campaigns are used to low-quality [polling] work and they do not even see it."

When you add bias to a bad work product, things get worse. "People are blind to their own biases, so they can't develop a frame that accurately reflects voters if it conflicts with the bias of those who work on campaigns. They don't listen for assumptions," he said.

It has been 16 years since I worked on campaigns, but Blank's assessment coheres with that experience.

The bias of those who work on Democratic campaigns also results in a basic skewing of issue orientation for the party. "On economic issues, Democrats are the winning party," says Blank. "But we see more movement on the culture war issues."

Lee Drutman, at the New America Foundation, has been pointing to this reality for years now. His analysis of the 2016 election results showed that if Democrats would move to the left on economic issues and to the center on social issues, they would become the majority party for a long, long time. Campaign workers are likely to be way more woke than the voters they seek to win over.

Organizing, messaging and polling. Understanding how these three factors interplayed in the 2020 election goes a long way to understanding how and why Trump did better than most people expected, and why Arizona flipped while Florida and Texas did not.

Both parties need to figure out how to win the loyalty of Latino voters. They are the fastest-growing demographic. They are the youngest demographic. Republicans should be looking at the 2020 results and recognize a great opening for their party, one they can start to pursue by getting serious about immigration reform. Democrats need to find a message that matches the aspirational views of Latinos, and appreciates the fact that they still view America as a promised land.

A version of this story appeared in the April 2-15, 2021 print issue under the headline: Want to win Latino voters? Drop the assumptions and organize .

Trump or Biden? What's a Catholic voter to do?