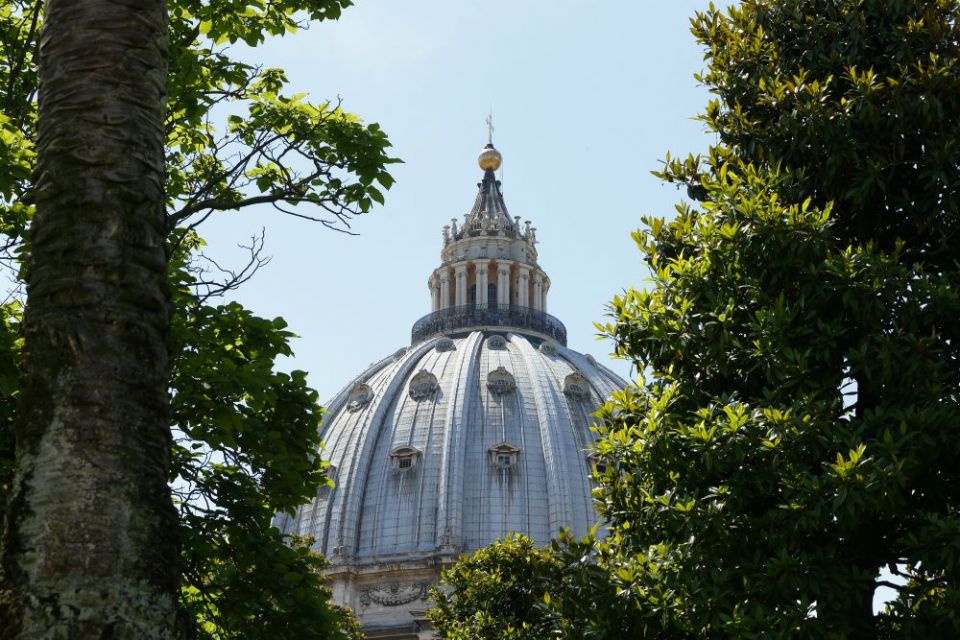 Bella Figura died last Saturday night after a series of illnesses, culminating in a painful bout of full-body cancer. The death was announced at LifeSiteNews in the form of an 11-page dossier authored by Archbishop Carlo Maria Viganò and, we now know, rightwing journalist Marco Tosatti. Funeral arrangements are pending but it is not expected the now bruta body of the deceased will be subjected to an open casket.

Bella Figura was 1,705 years old at the time of her death. She was born in February, 313, in the city of Milan when the Emperors Constantine and Licinius ended the persecution of the Christian Church, thus denying one of the clear marks of identification between the founder of the church and her members. As the church became embroiled in politics, first in central Italy and later throughout Europe, Bella grew out of genuine concern to keep the church pure, and served usefully as a kind of check on egotistical and irreligious clerics whose only concern was power. Eventually, however, Bella found herself consumed by the cancer of power, and she became instrumental in the creation of a clerical culture that valued appearances more than truth, more than integrity, more than the church's own children.

She dies unmourned, to be sure, which is not to say she will not be missed. Now, we in the church face a different question: What will now serve as a check on raw politics and power?

Look at the responses to the dossier from U.S. bishops. Archbishop Charles Chaput told The New York Times that he found Viganò's tenure as nuncio to have been marked by" integrity," but apparently could not bring himself to mention the pope's integrity. Bishop Thomas Olmsted of Phoenix issued a statement that, similarly, affirmed his high regard for Viganò but did not mention any such sentiments about the Holy Father:

Although I have no knowledge of the information that he reveals in his written testimony of August 22, 2018, so I cannot personally verify its truthfulness, I have always known and respected him as a man of truthfulness, faith and integrity. St. Paul says of priests: "This is how one should regard us, as servants of Christ and stewards of the mysteries of God. Now it is required of stewards that they be found trustworthy" (1 Cor 4:1-2). That is how I have consistently found Archbishop Viganò.

Bishop Joseph Strickland of Tyler, Texas, said he found Viganò's allegations "credible." Based on what? All three bishops seem to have forgotten that they took an oath of fidelity to the pope in the presence of his nuncio, not an oath to the nuncio in the presence of the pope.

Cardinal Daniel DiNardo, president of the U.S. bishops' conference, issued a statement that was a study in equivocation. He said the bishops "renew our fraternal affection for the Holy Father," but he credits the accusations intermingled with score-settling that characterized Viganò's screed, saying they "deserve answers." DiNardo did not mention that the former nuncio had violated the pontifical secret in a way scarcely imaginable previously. He did not defend his brother bishops who were attacked by the former nuncio with precisely no evidence or proof. Dan "the weasel" DiNardo should be his moniker forevermore.

The self-revealed news that rightwing money-man Tim Busch had discussed this dossier with Viganò should surprise no one. "Archbishop Viganò has done us a great service," Mr. Busch told The New York Times. "He decided to come forward because if he didn't, he realized he would be perpetuating the cover-up." Busch, of course, had no problem employing the Archbishop John Nienstedt, whose misconduct Viganò helped cover-up, as a kind of chaplain to his Napa Institute until it brought him bad PR. Further, Busch has had it in for Cardinal Donald Wuerl at least since the fracas over the Papal Foundation this winter. My colleague Tom Roberts had already alerted NCR readers to Busch's grandiosity. "We can be the teaching pulpit for the American church, but also the teaching pulpit for the Vatican and for the global church," the filter-less plutocrat told a conference honoring, of all people, Charles Koch.

Busch is convoking a conference on "Authentic Reform" to be held in Washington, D.C., this October. The event precedes the "Dignity of Work" conference sponsored by the Busch School of Economics at the Catholic University of America, which interestingly features no labor leaders. Busch apparently intends to capitalize on the calls for lay involvement in remaking the church, which is one reason people must be precise about such calls — and why, given my suspicion of the power of money, I will resist those calls until my dying breath! There is a lovely 18th-century Congregational church down the street from my home. I am not a Congregationalist.

This is not Busch's first attempt at lay leadership. A few years back in San Francisco, Busch's law firm, then known as Busch-Caspino (the two have since split) was hired to perform an "organizational audit" of the administrative offices, the chancery, of the archdiocese. When the firm presented their report to the senior staff, it quickly became obvious that they had produced an ideological audit, not an organizational one, and that the language was so ideologically driven as to be inappropriate. The report also was riddled with factual errors. Archbishop Sal Cordileone confiscated all copies of the report before the meeting ended. Is this someone we want involved in rebuilding confidence in our church?

Busch is not alone. George Weigel took to the pages of First Things to offer his defense of Vigano. At the time of the latter's retirement, Weigel penned an unctuous tribute in the National Catholic Register, which, among other things, commended Viganò because he "understood that there was no honorable retreat from what some deplored as 'culture wars.' " Weigel also made this astounding claim: "He [Viganò] appreciated the many strengths of the Church in the United States, including the evangelically-centered reconstruction of the hierarchy by John Paul II and Benedict XVI." Of course, the mainstream media has not yet grasped the key fact of Viganò's dossier, namely, that almost everyone named in it was appointed by the sainted John Paul II or Benedict XVI, including Busch's buddy Archbishop Nienstedt and the now-hated Archbishop Theodore McCarrick. I noted this last month but remind readers again: The deeper the investigation into the rise of McCarrick goes, the more likely people will ask why there was such a rush to canonize the man who appointed so many terrible bishops and who showed his concern for the victims of clergy sex abuse by never once even meeting with one of them. Mr. Weigel should not expend his moral capital defending Viganò. He will need it defending his hero John Paul II.

I take no delight in recognizing that the polarization that has infected our political culture has decisively conquered our ecclesial life. But let us be clear: There is no — zip, zero — moral equivalence here. When Joseph Ratzinger was elected pope, I felt a sense of dread, but I resisted it, engaged his writings, and found points of convergence I had not anticipated. I also found my faith challenged in ways that made me anxious at first but which caused me to stretch and grow. Certainly, whatever private qualms bishops may have had, they did not insult Benedict XVI nor praise the integrity of those who did so insult him. 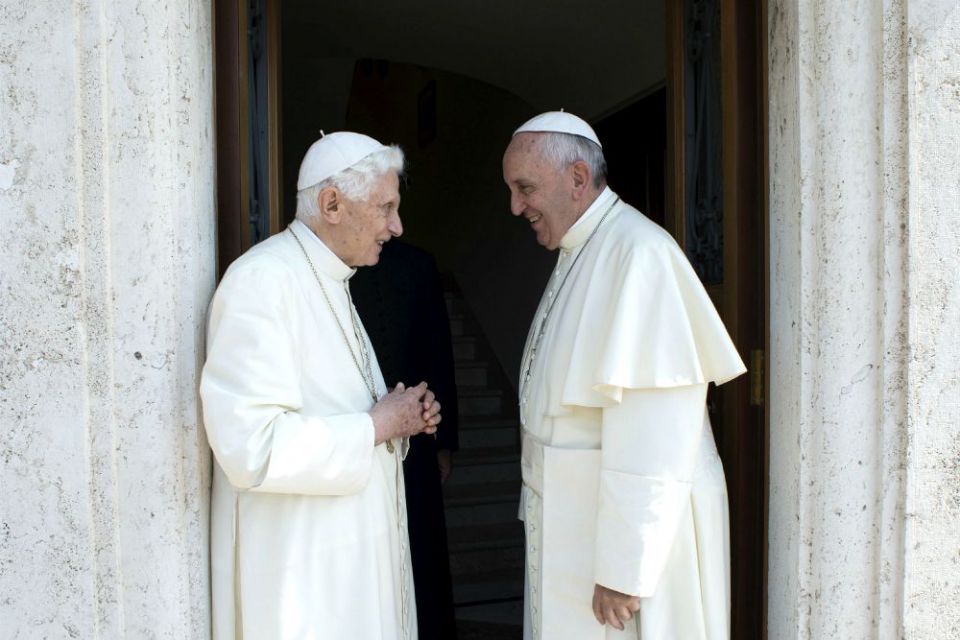 Retired Pope Benedict XVI talks with Pope Francis during a meeting at the Vatican on June 30, 2015. (CNS/L'Osservatore Romano via Reuters)

When Pope Francis was elected and it became obvious that his ideas about the Christian life coincided with some of my most heartfelt convictions, I was delighted, and part of that delight stemmed from the hope that with the blessing of the pope, my conservative friends could experience the kind of stretching and growth that I happily encountered during Benedict XVI's papacy. Alas, many on the right have spurned the gift they were offered, and not just spurned it but overturned one of the most distinguishing facts of our Catholic faith: We look to the pope for confirmation of the faith, not just for confirmation of my understanding of the faith or yours.

So let none of us be naïve. If there was any doubt that the opponents of Francis would stop at nothing to bring him down, that doubt is no longer tenable. Viganò spent the year attending right-wing theological events where the pope was attacked, but those conferences did not provide traction for the anti-Francis crowd. Now, they have glommed onto the child sex abuse issue, not because they care about the issue — Viganò's dossier displayed precious little in the way of concern for the victims, mostly only for the "filth" in the church that abuse evidenced, as if the important thing was that he not get cooties — but because Francis is perceived as vulnerable on the issue. (NB: That perception seems outdated and pre-Chile to me.) The opposition network is increasingly of singular focus even if they play different roles. I found it telling that over the weekend, a reporter for a secular newspaper asked me if EWTN was the parent company of LifeSiteNews. If we topple into schism, let it be called the EWTN schism. More on that tomorrow.

Bella figura represented the ecclesial equivalent of the "decent respect for the opinions of mankind" of which the Declaration of Independence speaks. She also created rules of ecclesial engagement. In the absence of some new rules, we can expect more of the brutal, Hobbesian ecclesial reality we experienced these past few days, in which power is the only thing that matters, the Twitterverse acquires way too much influence, the most extreme views become rallying points and come to dominate conversation, and, in the end, money will win out. I fear greatly that these calls for "lay leadership" are a smokescreen for the ambitions to power harbored by those like Busch who simply hate the pope. Beware the remedy: For centuries patients were bled by doctors to rid the body of malignancy, but the bleeding only weakened the patient and oftentimes killed her.

As Catholics we are all called to communion with one another. This call is especially vital if the college of bishops is to act in the leadership role assigned to it by the will of Christ and the theological ecclesiology that has developed within his church. Over time, they allowed bella figura to become a means for evading the decent respect for the opinions of mankind instead of instancing it. There must be significant changes in the culture that create transparency and accountability. The bishops must find ways to rebuild unity amongst themselves. The danger of schism is very real. But, in the end, we are Catholics, and we must decide if we wish to stand where Catholics have always stood in their search for ecclesial unity. I do. Consequently, I stand with Peter.

A version of this story appeared in the Sept 21-Oct 4, 2018 print issue under the headline: The danger of schism is real .