LifeSiteNews does harm with stories like 'Vatican financial scandal'

Last week, LifeSiteNews, a website known for its extremism, pushed a story about a "new Vatican financial scandal," one that would "raise serious questions about" Pope Francis' reputation as a "pope for the poor." They claimed to have leaked documents that proved there was some kind of malfeasance afoot. And, they repeated the allegation in one of the documents that the Papal Foundation and its chairman, Cardinal Donald Wuerl, had failed to exercise due diligence in the matter.

To which I reply: Bosh! As a columnist, it is difficult to know whether to even call attention to this kind of nonsense. You hope it will be seen for the ludicrous ranting that it is. But, then you see people like Samuel Gregg, research director of the Acton Institute, retweeting an article in the increasingly fringe-prone Catholic Herald, and you realize that someone has to expose this fraud for what it is. 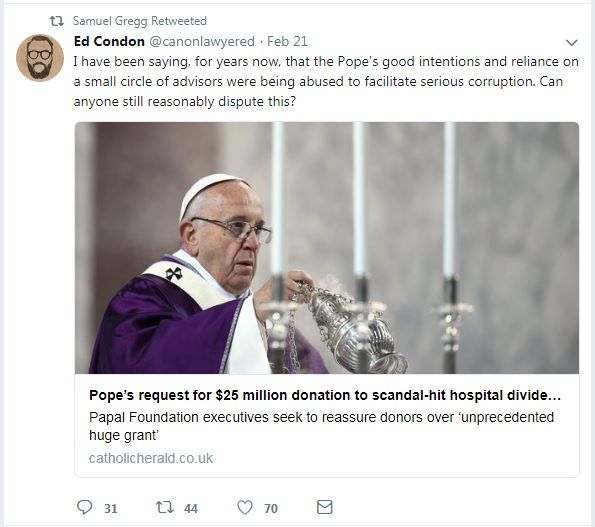 The allegations surround the decision of the Papal Foundation to award an unusually large grant to the Holy See for purposes of helping a church-owned hospital in Rome through a difficult transition period. I would not be able to conduct a site visit of a U.S. hospital, let alone an Italian one, but the "leaked documents" indicate Sr. Carol Keehan, president of the Catholic Health Association, conducted such a visit and if Sister Carol gives something the thumbs up, that's good enough for me. Despite the charge in the LifeSite story that this grant was made without proper documentation, they also report that Sr. Carol presented a 2 1/2-inch binder of information that one member of the foundation described to me as looking "like the Gutenberg Bible it was so big." Which is it?

When I first read this "breaking news" I smelled a rat, and not just any rat but a very wealthy, self-satisfied one. The quotes from a member of the Papal Foundation who objected to the grants and reportedly quit the foundation include sentiments like this: "Had we allowed such recklessness in our personal careers we would never have met the requirements to join The Papal Foundation in the first place." And, "And on this data, our Board of Directors voted to grant this failing hospital $25 million of our hard-earned dollars" (emphasis mine). You can almost hear the chest-thumping at the end of both sentences, no? I thought once you gave to a charity, the money was no longer really yours, but theirs. Silly, working-class way of thinking I suppose. If the person quoted had gone into politics, he would have a Louis XIV, "L'etat c'est moi!" air about him.

The second thing that tipped me off to the reality that this story was nonsense was the suggestion that the Papal Foundation's chairman Cardinal Donald Wuerl had failed in his duty to conduct due diligence. People who know Cardinal Wuerl will tell you that he conducts due diligence on his breakfast. He is one of the most hands-on bishops in the country. Wuerl is not only a stickler for detail, he is the kind of churchman whose reputation for thoughtful, deliberative interventions at the bishops' conference makes our job as journalists easier: When Wuerl goes to the microphone at a USCCB meeting and recommends the body go down a particular path, it is almost always a safe bet that his brother bishops follow his direction. LifeSiteNews has long written disparagingly of Wuerl's leadership. In fact, he has been a voice of sanity at the conference for thirty years. Those two facts are linked: Being attacked by LifeSiteNews is a badge of honor for the sane. 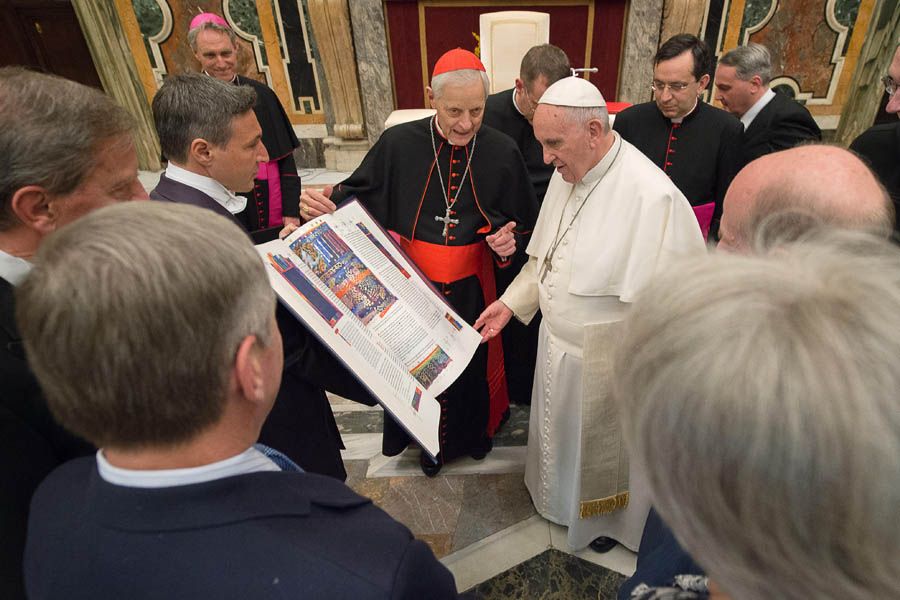 Pope Francis accepts the final volume of a limited, fine-art edition of The St. John's Bible at the end of an annual audience with the Papal Foundation, April 17, 2015 at the Vatican. Standing next to the pope is Cardinal Donald Wuerl of Washington. The St. John's Bible is a project of the Benedictine monks of St. John's Abbey and of St. John's University in Collegeville, Minn. (CNS/L'Osservatore Romano)

Now, I do not entirely want to let the bishops off the hook here. You assemble a bunch of zillionaires (you need to promise a million dollar donation to join the Papal Foundation), people whom the zeitgeist tells that they are masters of the universe, you let them select some of their own as board members, you allow those same board members to publicly revel in an anti-Christian ideology – free market libertarianism – at the university you bishops own, an ideology that helps these rich folk confuse their material worth with their moral worth, you show up at their conferences and appear to bless their every effort. What could possibly go wrong?

When LifeSite started pushing this story with a flood of emails last week, I called a bishop who related that when he was a young priest, his archbishop explained that there were three types of Catholic donors. The first, and largest, group consisted of those Catholics who love the church and simply want to assist in its mission. The second group is more or less interested in the Church's mission, but they really value the acclaim that philanthropy confers, the picture with the bishop, their name on some building. They, too, are not really problematic. The third group does not actually seek to give, it seeks to buy. They want control. They will make a bishop's life hell.

And so it is. The LifeSite story did not mention which foundation board members started this ruckus. Smart money would attend to one of the board members of the Papal Foundation: Tim Busch. The founder of the Napa Institute, a conservative group that is not really a think tank but which hosts pseudo-academic conferences, Busch's comments at an event last year celebrating the work of Charles Koch were highlighted in a story last year by Tom Roberts. The event was co-sponsored with the Catholic University business school that bears his name. Roberts reported:

QED. No one should be surprised that the man who thinks — and says publicly — that his institute or his school would "be the teaching pulpit for the Vatican" is a man capable of creating difficulties at a foundation established to help the pope, especially when we have a pope whose views on economic and business matters are just a tad different from those of Busch, Koch, and their ilk.

The other reason none of us should be surprised at this boorish behavior by these rich folk is that the last year we have all had a chance to learn something about the world of CEOs and uber-rich capitalists. Donald Trump did not learn to be a thin-skinned, narcissistic bully with a penchant for misogyny, xenophobia, conspiracy theories, and cronyism last Jan. 20. Yet, these distinguishing characteristics did not prevent him from achieving success in the world of business. I do not mean to suggest that all CEOs are creeps like our president or whichever member of the board of the Papal Foundation is leaking documents, and giving a distorted story, to LifeSite. I do suggest that the culture of mega-millionaires easily supports political candidates who want recipients of food stamps to undergo mandatory drug tests before qualifying for assistance but does nothing, absolutely nothing, to restrain outrageous behavior by those with enough money to join their clubs.

Just as Hannity and Ingraham at Fox News rant about manufactured controversies, and traffic in viciousness towards the poor and the stranger, so LifeSite news manages only to prove capable of a distorted, malevolent worldview that they peddle to a small, but noisy, fringe of Catholicism. They cause harm, and people have lost their jobs on account of their witch hunts. They are not going away. It is time the bishops stood up to them more forcefully.

Column | LifeSiteNews does harm with stories like 'Vatican financial scandal'

US bishops should drop everything and focus on preventing schism