Wilton Gregory will be a great shepherd for Archdiocese of Washington 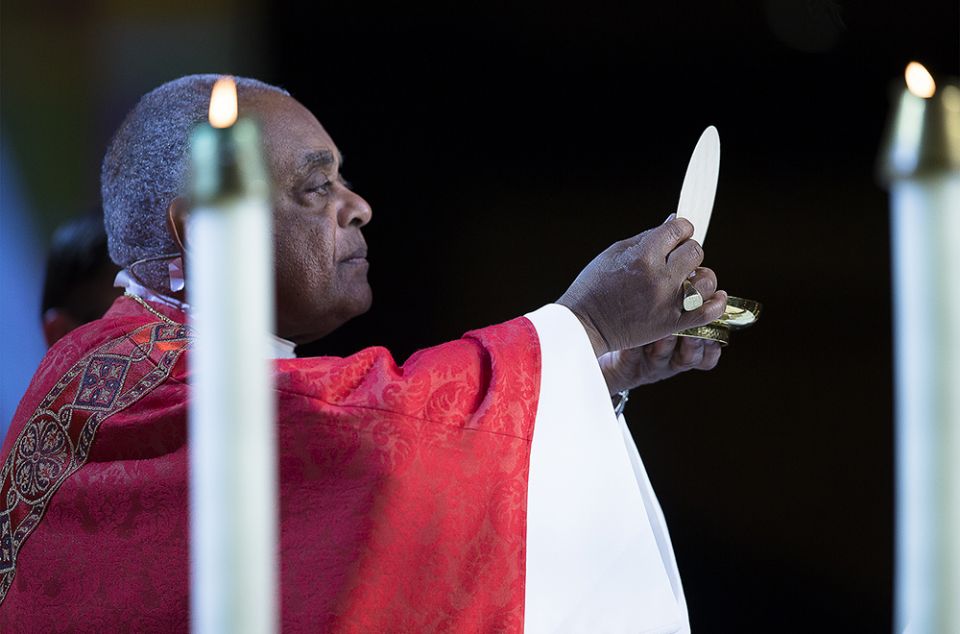 Archbishop Wilton Gregory of Atlanta, presides over the Mass marking the feast of St. Matthew during the Fifth National Encuentro, or V Encuentro, Sept. 21, 2018, in Grapevine, Texas. (CNS/Tyler Orsburn)

The appointment of Archbishop Wilton Gregory to lead the Archdiocese of Washington should put a smile on most people's faces. The Holy Father has chosen a kind, gentle and intelligent pastor to head to the polarized city on the Potomac. The new archbishop is no bomb thrower, no culture warrior. Washington will be welcoming a southern gentlemen to its cathedral and I couldn't be happier.

Gregory was a gentleman long before he was transferred to Atlanta in 2004. He had risen in the hierarchy under the tutelage of a genuine southern gentleman, the late Cardinal Joseph Bernardin. The much beloved leader of the church in the United States for more than 20 years set out a vision — engagement, consistent ethical stances, an avoidance of vitriol — which, if embraced, would have allowed the Catholic Church in this country to continue as a leaven in society. Instead, the culture warriors gained control of the narrative and then of the bishops' conference itself. The new archbishop comes to Washington at a time when the influence of the bishops on national affairs has never been lower.

I cannot fail to recall an essay written by George Weigel and published at First Things in February 2011 entitled "The End of the Bernardin Era." Weigel wrote that essay after then-Archbishop Timothy Dolan defeated former Bernardin Auxiliary Bishop Jerry Kicanas for the leadership of the U.S. bishops' conference. The heart of Weigel's indictment of Bernardin and those bishops who followed in his footsteps is contained in these words:

For the Bernardin Era and the style of governance characteristic of Bernardin Machine bishops were deeply influenced by the Roman-brokered "Truce of 1968," an ill-fated attempt to settle the disciplinary situation in the Archdiocese of Washington, where dissent from Humanae Vitae was widespread and public. Whatever the Vatican's intentions vis-a-vis the difficult situation in Washington, what was learned from the truce were two lessons that would shape an entire era of U.S. Catholic history. The first lesson was that the Holy See would retreat from rigorously enforcing doctrinal discipline if it could be persuaded of the danger of schism. The second lesson was that American bishops were ill advised to go out on a public limb in defense of Catholic teaching (as Patrick Cardinal O'Boyle of Washington had done by disciplining priests who had publicly rejected Humanae Vitae), for that could result in the Holy See sawing off the limb and leaving the bishop in question in a bad way.

You see the defining Jansenism of Weigel and his ilk: The mark of Catholic identity is not any of the prescriptions contained in Matthew 25. For Weigel, like Plato, the virtuous man and the acceptable leader is the person who thinks correctly, and the key to leadership in the church is thinking correctly. Never mind that theology, like canon law, exists to serve the actual goals of ecclesial leadership which are pastoral solicitude and evangelical witness according to the Gospel.

N.B. The appointment also marks an instance of the church coming full circle in another way. A source close to Bernardin told me that, at the time of his final illness, Bernardin wanted Bishop Donald Wuerl to replace him in Chicago. Now, it is Bernardin's protégé who takes over for Wuerl in Washington.

In the weeks leading up to today's announcement, Rocco Palmo published an NCAA-style bracket with the different candidates for the vacancy in Washington listed. The list had some errors. For example, two names that figured prominently in the discussions, Bishop Edward Burns of Dallas and Archbishop John Wester of Santa Fe, were not on Rocco's list. But, what caught my eye was something different. All 15 bishops on Rocco's list are identified by their surname except one: Wilton. In fact, as I started to write this column and found myself writing the words "Archbishop Gregory" it seemed odd. I do not know the archbishop well, but in those times when we have been at a conference or a meeting together, everyone calls him as "Wilton." That tells us something about the man.

The new archbishop also has been a leader on Laudato Si', publishing an "action plan" that is the single best resource I have seen published by any diocese in the country. I came across it when the Archdiocese of Boston was using it as the content for a new interactive platform they were launching. The guide lists a variety of things people can do, each one denoted "easy" or "moderate" or "advanced." One of the easy items is "Create or expand your library" and the guide recommends books by Passionist Fr. Thomas Berry or Franciscan Sr. Ilia Delio, or the late Jesuit theologian Pierre Teilhard de Chardin. I am not sure those authors would have been included on a list of recommended books in, say, the Archdiocese of Philadelphia.

Archbishop Wilton Gregory will be the first black archbishop of Washington. In 2009, when controversy erupted over the decision by the University of Notre Dame to award an honorary degree to President Barack Obama, unspeakably disrespectful things were said about our nation's first black president. Black Catholics, many of them quite conservative, experienced that disrespect in ways it is difficult for white people to grasp. It was deeply painful. The appointment of a black archbishop will be a shot in the arm to the black Catholic community in the nation's capital, a city that is historically black and in which black Catholics have long played a vital part. And, at a time when our nation is dealing with white nationalism in ways we had thought consigned to the past, Gregory's intelligence, charm and moral rectitude are a standing rebuke to the bigotry that too often drips from the president's lips.

The fact that the new archbishop is already 71 indicates that the new archbishop will have, at most, nine years to accomplish any particular objectives. I do not know if that is enough time to tackle the enormous problems at the Catholic University of America, of which he is now chancellor. But, he can make a start. The school's embrace of libertarian economics in its business school and celebration of anti-Francis ideology in its theology department is an embarrassment to the bishops who own the school. Archbishop Wilton does not strike me as the kind of person who warms to confrontation, but I hope that is a side of personality I have simply not witnessed. He will not be able to cajole the school back into sound Catholic teaching, he will have to lay down the law.

Washington is a much smaller diocese than Atlanta, but it is enormously complex. As John Gehring explained in his profile of the archdiocese, Washington is home base to so many national institutions in both church and state that the resident archbishop instantly becomes a prominent spokesperson for the church in this country. Cardinal Donald Wuerl navigated these sometimes treacherous waters with skill, balanced judgment and circumspection. I expect Archbishop Wilton will follow a similar model. Do not look for him to become a regular on the Georgetown cocktail circuit nor confine himself to the sacristy. He will be engaged but he will not let himself become anyone's political pawn.

The Archdiocese of Washington has been through a rough year. Dozens of its priests were ordained by Theodore McCarrick, and so the revelations of his horrific behavior has been crushing. Wuerl, I think unfairly, became the face of the Pennsylvania grand jury report and was forced to resign sooner than expected. With the arrival of Archbishop Wilton, we can all turn the page and head into the future with our new shepherd, confidant that the Lord, as promised, will never abandon His church.