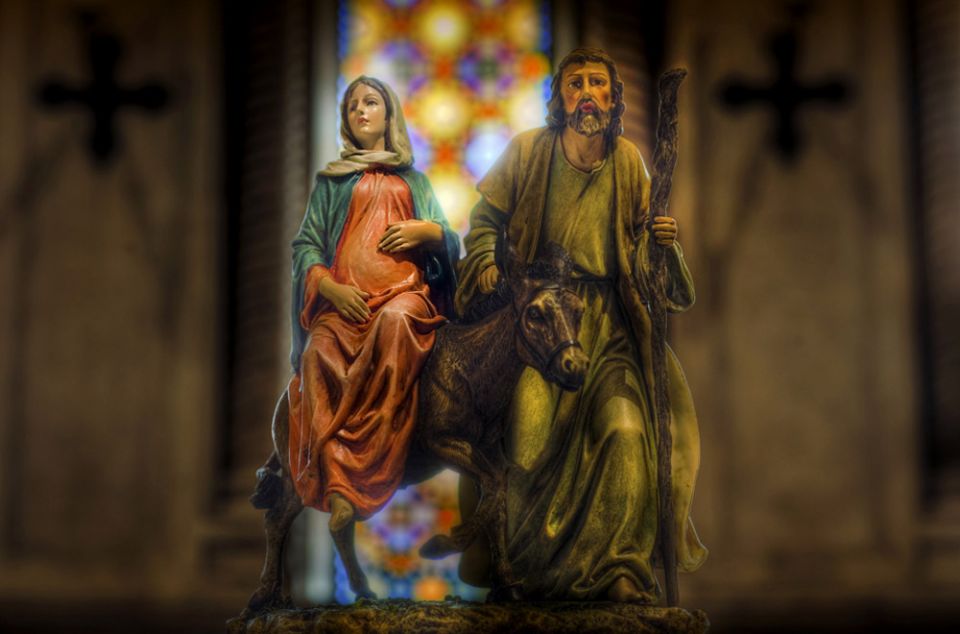 A sculpture showing an expectant Mary with Joseph en route to Bethlehem is seen in a church during the 2012 season of Advent. (CNS/Lisa A. Johnston)

Through the mists of two millennia the large patterns become the scholars' certainties. Jesus as "the centerpiece binding together Israel and the church" is clear in our time as one contemplates the infant narratives.

The image is Fr. Raymond Brown's in his magnificent An Introduction to the New Testament. Clear, too, are the "bridges," as Brown puts it, constructed by the Evangelist Luke, one tying the figures representing Israel in the narrative to the infant and the corresponding bridge, which "the Jesus of the Gospels comes across … to instruct the Twelve and prepare them for the coming Spirit."

In such certainties — our connections to ancient traditions as well as to the fathomless future — lies our solace and comfort. In a year and on the heels of several decades that we in the Catholic community have just experienced, however, such certainty, which maintains in the long view, is all but overwhelmed in the circumstance of the moment.

Leave the standard images of the crib to our children. Adults in the Catholic community this year might ponder the crib as a memorial to all the innocents in our era and within our church, whose souls have been shattered by the violence of sexual abuse, whose families have been forever shaken and altered by the revelations of cover-up. The clarity of the long view has been clouded for us. We stand, wayfarers, wondering which next steps to take and how to avoid further danger.

Three recently published essays by Jewish writers might provide a steadying hand as many of us reel under the weight of betrayal and scandal, and wonder just what it means, in this moment in the 21st century, to be Catholic.

It is fascinating that, while not romanticizing the church or its historic and present sins, members of a community so long despised by Catholics also see in us wonderfully redemptive and redeeming characteristics. Menachem Wecker's appreciation of the beauty of our art and architecture and the transcendent qualities of our symbols and rituals draws close to our understanding of the Incarnation and the importance of our sacramental life.

Julia Lieblich, in a complex story of deep personal connection as well as pain, described the powerful allure of our personal pieties and the comfort found through the unshakeable faith her "family" had in Our Lady of Guadalupe.

Rabbi James Rudin has met up close the principal actors who have dominated the stage in the contemporary Catholic drama. He has known, too, many of the layers that are sometimes hidden in the weave of the larger community. And he comes away with profound admiration for women religious and for the church's long social justice tradition. He pleads that the church not lose its commitment to that tradition.

Claiming no scientific weight to this limited "survey" — a request to outsiders profoundly invested in their own tradition to give their informed impressions of ours — it is fascinating nonetheless to discover what about us they consider appealing.

The beauty of our art and traditions; the power of our devotions; the strength of our ministries and, especially, of the women who convey the heart of the Gospel into all corners of the world.

What they see and appreciate had nothing to do with what some in the Catholic community spend so much time and energy fighting about — an obsession with abortion, contraception, the divorced and remarried and resistance to accepting LGBT Catholics as fully functioning, without qualification, members.

One suspects that their view of us is not uncommon, that our "identity" as a community of the people of God has little to do with hierarchy-fueled fights that feed a base that enjoys the conflict.

Too many of us have tacitly conceded that our identity is, indeed, wrapped up in that tick list of "hot button" issues that generates so much of what passes in the wider culture as the Catholic conversation.

We have been wittingly or otherwise persuaded that such a list, which trivializes weighty issues, constitutes a comprehensive definition of "orthodox" Catholicism. "Orthodox" has about it a ring of ancient authenticity. But the orthodoxy of the current era is anything but ancient. It is a construct of rigorists, largely developed in a U.S. context, that narrows the richness of Catholic tradition to the equivalent of conservative political talking points. Those points, providing the bona fides of "orthodoxy," relieve the adherents of responsibility for the remainder — nay, the major portion — of authentic Catholic teaching. The bulk of the teaching is given refuge and partitioned off as a matter of "prudential judgment."

It is faux orthodoxy and has little to nothing to do with authentic tradition. It is grounded in a need for certainty that becomes its own obstacle to faith. We are far more than a punch list of political talking points.

This season of expectation, of wonder at the possibility of God with and among us, is a perfect time to sink into that authentic tradition and to contemplate where we've gone off track. How did we get to this point of aberration where the clergy culture itself has become the church's greatest scandal, and our identity as a people of God could be so crimped and co-opted by religious ideologues?

Those two aberrant strains originate from the same stock. "[O]f all the doctrines of the church Christology is the one most used to suppress and exclude women," writes theologian Sr. Elizabeth Johnson in She Who Is: The Mystery of God in Feminist Theological Discourse. "At its root the difficulty lies in the fact that Christology in its story, symbol and doctrine has been assimilated to the patriarchal world view, with the result that its liberating dynamic has been twisted into justification for domination."

That's a sophisticated way of saying that our God, our religious practices, our doctrines have all been imagined and constructed over centuries by celibate men in a secretive culture shaped "according to the model of the patriarchal household and then to the model of the empire."

The infrastructure of the empire, in our case, is crumbling. The sense of security and certainty we once may have felt in that form of hierarchy and the all-male images of God is as vaporous as the eternal rule of a first-century Herod.

If only we were able to crawl through the millennial mist and into the scene, and cough on the dust of travel, and wonder how to comfort the aches and insecurity of a first-century pregnancy. If we had to deal with the doubts and fears of a father who, we are told, is tugged between the skeptical glances of his culture and his dreamed instructions from on high, perhaps we could find an alternative comfort and security for our own time. It is in the confusion and uncertainty and paradoxes of that event, long before the community understood the Christ in that Jesus moment, that we might take our comfort today.

A version of this story appeared in the Dec 14-27, 2018 print issue under the headline: Advent offers chance to rediscover tradition, free from ideologues .

Art and beauty can carve a path through a fallen world