Editorial: Despite moments of welcome, LGBTQ Catholics still on the margins 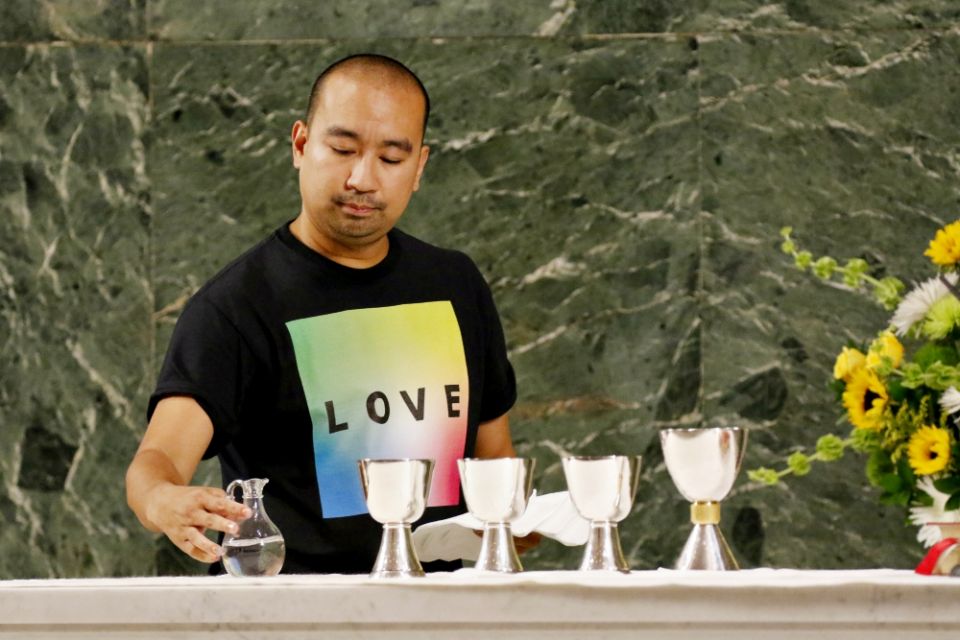 Popes, even the comparatively freewheeling Francis, don't cram into an already jammed calendar a half-hour, announced, private meeting in a formal setting with a U.S. priest who has been the cause of ecclesial apoplexy in some church quarters, unless the papal intent is to send a very clear message.

And at least one unmistakable message in the Sept. 30 meeting between Francis and Jesuit Fr. James Martin was, if not in so many words: "This priest is okay, so stop messing with him." It was an unambiguous point aimed clearly at some U.S. bishops and others on the right who had spoken out against Martin, his book Building a Bridge: How the Catholic Church and the LGBT Community Can Enter Into a Relationship of Respect, Compassion, and Sensitivity, and the speeches he's been delivering since its publication in June 2017.

As remarkable as the meeting and the message are — who could have dreamed of such 10 years ago? — in their wake are as many questions as answers.

Martin has become a target for those who think homosexuality should be condemned, that the church should draw severe lines around questions of sexuality, that gays should be kept from seminaries, that partners in same-sex marriages are automatically disqualified from taking up positions of service in the church, and even that homosexuals can be changed. He has been disinvited from speaking engagements and subjected to unspeakable ugliness online.

Most recently, he was singled out by Philadelphia Archbishop Charles Chaput who, in gracious if quite pointed prose, stated: "Due to the confusion caused by his statements and activities regarding same-sex related (LGBT) issues, I find it necessary to emphasize that Father Martin does not speak with authority on behalf of the Church, and to caution the faithful about some of his claims.” Chaput received some public support among other bishops who are similarly identified as culture warriors.

If he doesn't speak with the authority of the church, Martin certainly, since Sept. 30, speaks with the approval of the pope.

But if the pope is signaling a new attitude in the church regarding the LGBTQ community, what, exactly, does it mean? Further, is it even fair to expect exactitude in an area that for so long has been deeply fraught with contention that can extend to hatred?

Clearly, the meeting was a friendly one. Martin was not chastised. He tweeted that it was "one of the highlights of my life. I felt encouraged, consoled and inspired by the Holy Father. … And his time with me, in the middle of a busy day and a busy life, seems a clear sign of his deep pastoral care for LGBT Catholics and LGBT people worldwide."

That seems an indisputable claim.

And it is certainly backed up by others, most enthusiastically by New Ways Ministry, which has long advocated for and ministered to LGBTQ Catholics in the church. The New Ways statement described the event as reason for "a day of celebration for LGBTQ Catholics who have longed for an outstretched hand of welcome from the church that they love."

Certainly, Francis's outstretched hand is far more welcoming than the "intrinsically disordered" (yes, we know, it was referring only to orientation) judgment that gays and lesbians previously encountered. But how much of the LGBTQ experience is welcome? Martin has been cautious to maintain he stays within the bounds of church teachings. But do members of the LGBTQ community who are also Catholic also obey such proscriptions?

NCR columnist Jamie Manson, who writes often about the struggles an openly lesbian woman faces in trying to stay in the church, has been clear in the past in pointing up Francis' inconsistencies in dealing with gays, lesbians and transgender persons.

While he's met with Martin and apparently restored to ministry another priest who had been ousted for disagreeing with church teaching on same-sex marriage, the pope has also publicly worried about homosexuals in the priesthood and signed a Vatican document that stated the church "cannot admit to the seminary or to holy orders those who practice homosexuality, present deep-seated homosexual tendencies or support the so-called 'gay culture.' "

On the Society of Jesus' official Twitter account, the Jesuits said of Francis and Martin's meeting: "No Politics. No strategies. No hidden agendas. Just two brothers in the Lord in an honest conversation about how best to reach those who feel as if they are on the margins. This is the Gospel at work in our Church today."

That is a lovely sentiment. But they have to know — as the pope certainly did — that the politics in the meeting is inherent. If there was strategy, it was discussed during the conversation, the contents of which were not revealed.

And what it all means in terms of acceptance of LGBTQ Catholics and their families — the degree to which they are accepted — will likely unravel over time.

We don't want to spoil the moment, but we feel compelled to say big as it was, it was but a moment. This pope has certainly extended a more welcoming hand to the LGBTQ community than any previous. We certainly take hope from the string of increments extending that welcome that in this papacy have mixed with the teachings and attitudes that have caused LGBTQ Catholics to remain on the margins.

We'll rejoice in the increments, but only with the sober understanding that as long as LGBTQ Catholics are on the margins, and as long as popes can change while church teaching on sexuality in so many areas remains unchanged, there's a lot more work to be done.

A version of this story appeared in the Oct 18-31, 2019 print issue under the headline: LGBTQ Catholics still on the margins .

Editorial | Editorial: Despite moments of welcome, LGBTQ Catholics still on the margins

US bishops are not responding to Pope Francis' message

After Vatican decree, over 100 theologians pledge to support same-sex couples