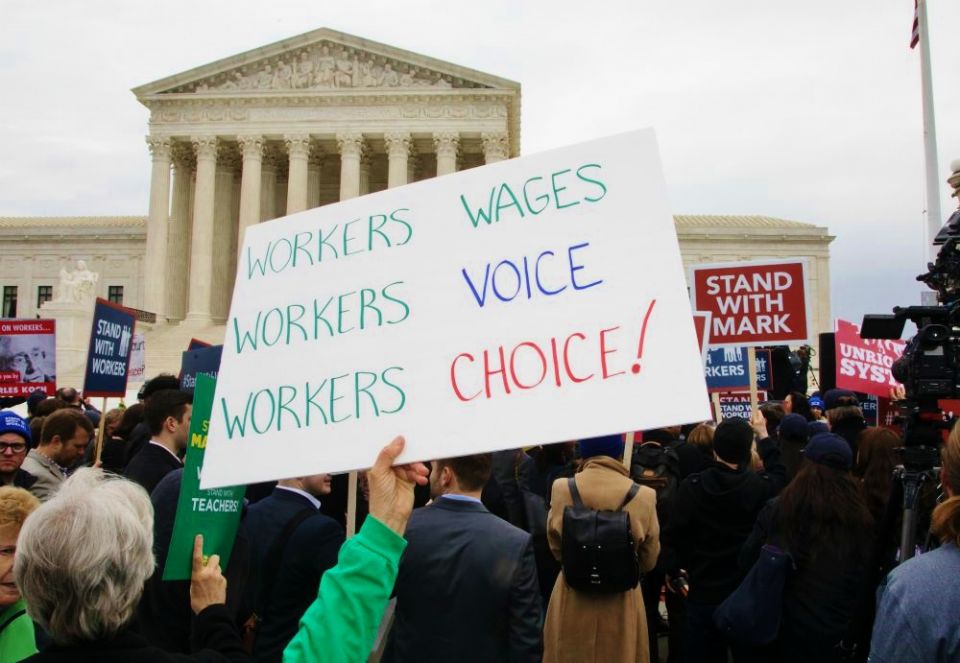 The U.S. Supreme Court heard oral arguments Feb. 26 in the case Janus v. American Federation of State, County and Municipal Employees (AFSCME). If the court rules against the unions, so-called right-to-work laws would be nationalized for all public employees.

At issue in this case is whether a public employee can benefit from the work of contract negotiation and enforcement a union performs on his behalf without paying for it. Unions are legally required to negotiate on behalf of all workers, whether those workers belong to the union or not. The union must represent them in any contract enforcement decisions. Mark Janus is a child support specialist at the Illinois Department of Healthcare and Family Services, and he chose not to join AFSCME. Because he disagrees with some of the union's positions, he said, he objects to paying the union's agency fees and sees it as a freedom of speech case.

In union parlance, Janus wants to become a "free rider," benefiting from services to which he did not contribute.

Janus' is an essentially libertarian argument, one that erroneously values his autonomy above the right of all workers to form a union and bring their collective voice to bear on issues of concern at their workplace. The amicus curiae brief filed by the U.S. Conference of Catholic Bishops in this case points out that Janus' case is "a misguided effort to protect one individual from government coercion [that] would leave only individuals to stand against government (or economic) coercion" (emphasis in the original).

The bishops' brief recognizes that a vibrant society needs intermediate social institutions, that the kind of freedom the Constitution aims to enshrine needs a vibrant civil society, that such freedom would be easily threatened if there were no civil society organizations standing between the full power of the state and individual citizens.

Misinformed critics of unions allege that people like Janus are being compelled to pay for political speech of which they do not approve, which is a strong allegation. But no one is forced to join the union, pay dues and contribute to the union's political activities. Janus pays only an agency fee that covers the cost of negotiating a contract and enforcing it. State laws are precise about what can and cannot be included in the agency fees.

Put differently, if tomorrow public sector unions stopped all political advocacy, Janus' agency fee would not be altered by a penny.

Bishop David Zubik of Pittsburgh wrote a powerful column in his diocesan newspaper, seconding the amicus brief, but also pointing to the basic pro-family role unions continue to play in American life:

I grew up in a union household. My father, a proud member of Local #590, was able to support our family on his wages as a "green grocer" in our local market because of the leadership of his labor union. The same could be said for almost every family with whom I grew up. None of us was wealthy. But we got along just fine on one income so Mom — today it might be Dad — could stay home and raise children. We had time off for vacation. We could access medical care. Workers who were treated unfairly by their bosses had someone to go to bat for them.

The role of unions in supporting strong families is one of the reasons that the church has supported the labor movement from its earliest days.

The Catholic Church's support for organized labor is one of the crowning achievements of Catholic social doctrine, dating back to 1887 when Baltimore Cardinal James Gibbons defended the Knights of Labor, one of the nation's first unions. Since Pope Leo XIII's seminal 1891 encyclical Rerum Novarum on capital and labor, every pope has repeatedly and forcefully defended workers' right to organize.

In the U.S., unlike in many other countries, the Catholic Church did not lose the workers to socialism and communism in the first half of the 20th century. Many union locals had their first meeting in the basement of a Catholic church. Many Catholic parishes used the union hall for Mass when the church was being built.

The affluence of American Catholics has caused those once vibrant bonds to atrophy. Bishops became more reliant on wealthy donors than on working men and women to fund the church's ministries. Fewer and fewer Americans of whatever denomination belong to unions. Over the past 40 or so years, Catholic identity in the U.S. increasingly focused only on neuralgic sexual issues like abortion, the role of women in church and society, and LGBT rights.

The rise of wealthy, organized libertarian organizations bent on destroying unions has been successful in turning once strong bastions of organized labor into right-to-work states. Wisconsin, Michigan, Indiana and West Virginia all adopted right-to-work laws in recent years after groups funded by the Koch brothers and libertarian foundations succeeded in electing anti-union state legislators. All four states were in President Donald Trump's column in 2016.

We are thrilled to see the U.S. bishops reclaim their history and their teaching by supporting organized labor in this case. We hope this will help bring new life to that once vibrant relationship between organized labor and organized religion, which is so much needed today. Our culture suffers from a deficit of solidarity. The Catholic Church should proudly stand with labor unions in a joint effort to resist the libertarian impulses of our age and reconnect with the values and the policies that enflesh our nation's constitutional commitment to "promote the general welfare."

Read this next: Don't let 'Janus' case axe root of American labor
This story appeared in the March 9-22, 2018 print issue.

The ‘Precariat’: stressed out, insecure, alienated and angry