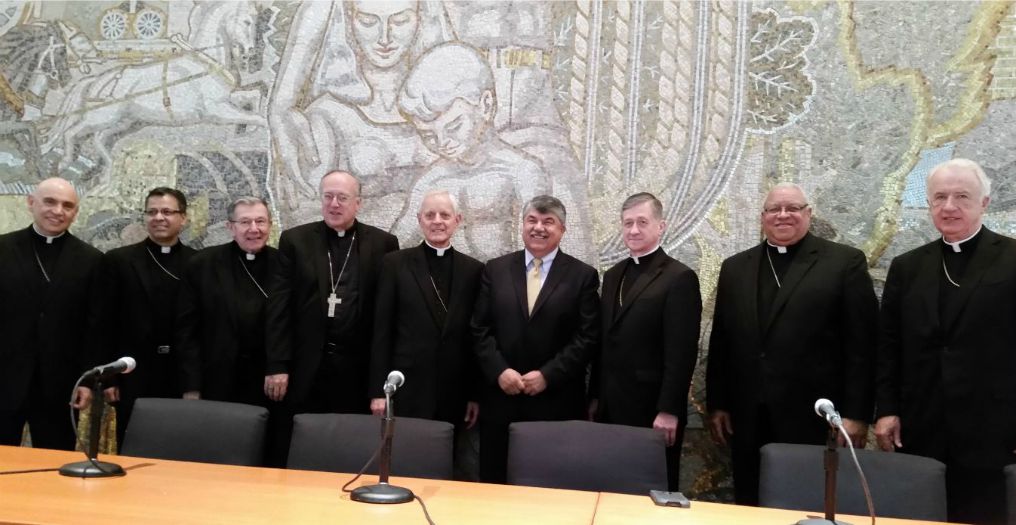 Wednesday, I shared some of my concerns about the arguments put forth by Ed Whelan, president of the Ethics and Public Policy Center, in an essay he published online at National Review. He criticized the U.S. bishops' conference for filing a brief in support of the unions in the case Janus v. AFSCME. Oral argument will be on Monday, Feb. 26. Today, I want to explore the deeper reasons I hope the court upholds their prior rulings that unions can collect fees from non-members to cover the cost of negotiating the contract and representing the workers, tasks the union is legally obligated to perform.

I cannot think of a magazine article that has affected me more deeply than Lew Daly's "The Church of Labor" published at Democracy Journal back in 2011. If I could ask the Supreme Court justices to read one thing before deciding how to vote in the Janus case, this would be it. In a comparative legal theory tour de force, Daly showed how our legal culture after the Reformation and the seraglio of the Enlightenment, and also unique to the Anglo-Saxon legal world, has had trouble recognizing that groups can have rights and not only individuals.

I came to look at our political and cultural landscape differently. The important divisions in our society were no longer those between Democrats and Republicans, or liberals and conservatives, but between libertarians and those concerned to foster social solidarity, not necessarily communitarians, but people who read Bowling Alone and found it very worrisome. I noticed that the words Rachel Maddow used to denounce any legislative attempt to limit abortion — "Keep Uncle Sam out of the doctor's office" — were identical to the words Sean Hannity used to denounce the Affordable Care Act. Liberalism, founded in no small part to guarantee freedom of conscience, now placed the words "religious liberty" in scare quotes. Conservatives, whom I had thought committed to a more Burkean understanding of freedom, increasingly embraced libertarian economic ideas. I felt increasingly homeless politically and intellectually.

It is a core tenet of Catholic social doctrine that a healthy society requires vibrant intermediate social organizations. We do not believe that the individual is the basic societal unit, but the family. And we believe that unions and churches and guilds and voluntary associations of every stripe all help build up a robust civil society in which people feel connected, solidarity is fostered, and potential tyrants would hit a bump. Subsidiarity is the way Catholic thought shapes solidarity, with a preference for solutions at the lowest level of society possible, but the highest level necessary, all the while remembering that the Latin root for the word subsidiarity is subsidium, help.

De Tocqueville expressed similar sentiments about what constitutes a health society. He, of course, knew the danger posed to human flourishing when there were no organizations between the individual and the state, as had happened during his own country's revolution, leading its aspiration for freedom down into the dungeons of oppression and misery.

The amicus curiae brief by the U.S bishops' conference addresses this issue when it states, "Ironically then, a misguided effort to protect one individual from government coercion would leave only individuals to stand against government (or economic) coercion." The irony is so characteristic of the problem with libertarianism.

This is not all pie-in-the-sky intellectualism, fretting about angels dancing on the head of a pin. When the political and legal fight over the Department of Health and Human Services Department's contraception mandate erupted, I sided with those religious institutions that objected to the government interfering in such a way that it could threaten the religious identity of those institutions. I think they should have accepted the accommodation HHS subsequently offered, but the point holds: Intermediate social organizations can be destroyed from above by government overreach. And, for us Catholics, religious liberty is not an individual possession, it is something we hold in common. Our faith is expressed in our vast array of charitable and educational institutions as much as it is at Sunday Mass.

In this case, the danger to the church is obvious: If Mr. Janus can join a union and then seek to blow it up, why can't someone join the workforce at a Catholic university and then insist that he not be made to teach Aquinas? Or join the church and decide we should meet on Monday mornings and not Sunday? The group — the church, the university, the union — needs to have a certain institutional integrity that is free not only from government overreach, but from a legal structure that values only, and erroneously, the autonomy of the individuals who comprise the group.

In his magnificent column on this subject, Bishop David Zubik wrote:

This case is about far more than unions. It affects any employer that stands for any kind of principle. For instance, when the church hires someone to work at a parish, a diocesan ministry, a Catholic university or health center, they are expected to do that work according to the teachings of the church, and not to do or say anything publicly that would disparage Catholic faith and morals. Employees sign an agreement to that effect, and may lose their jobs if they fail to keep the agreement.

The man who brought the lawsuit took a union job, agreed to the union terms, and then sued on free speech grounds because he objected to the union's political positions. It's similar to someone who has taken a job in the Catholic Church arguing that he should be allowed to keep his job while also publicly advocating for abortion. He knew the terms of employment when he accepted them.

As I became increasingly concerned about the spread of libertarian ideology, the one group of people who seemed to grasp the concerns I had about our increasingly libertarian world were my friends in organized labor. For them, the language of solidarity was not a mere remembrance of the brave dockworkers in Gdansk and the Polish pope who championed their cause. For them, solidarity is what led them to get United Airlines to donate the use of a jumbo jet to fly 300 Teamsters and electricians and carpenters and nurses and doctors to Puerto Rico after Hurricane Maria to work for free. (Archbishop Roberto Gonzalez of San Juan helped direct them to the areas most in need and was there to greet them the night they arrived!) For them, solidarity is what caused them to fight for an increase in the minimum wage, which would not affect their members but would be good for society. For them, solidarity demanded standing with immigrants, young and old, few of them ever likely to join a union.

In his encyclical Caritas In Veritate, Pope Benedict XVI called for "quotas of gratuitousness" in the economy, and people wondered what he meant. I would submit that watching organized labor lobby for better working and legal conditions for people who do not belong to their unions is an example of such a quota.

For us Catholics, solidarity had a specific quality: It must be manifested most especially to those who are poor and marginalized. As Cardinal Timothy Dolan said in his 2012 speech at the Al Smith Dinner, our Catholic solidarity extends first and foremost to "the un's of the world — the unemployed, the uninsured, the unwanted, the unwed mother, the innocent, fragile unborn baby in her womb, the undocumented, the unhoused, the unhealthy the unfed. …" (His litany begins at 4:45.) And, as the cardinal stated, the church believes the government should and can partner with civil society to serve those un's.

In his essay, Whelan objects to the fact that AFSCME gave a large donation to Planned Parenthood's political action committee. As I noted, that donation was for help fighting right-to-work laws. But still I wish it had not been made because Planned Parenthood, in its effort to extend solidarity to women facing a crisis pregnancy, fails to extend solidarity to the unborn child. Their solidarity is imperfect, to be sure. But I would say to Whelan: How can we create a culture and a society that extends solidarity to the unborn if we start by taking an axe to the root of one of the organizations — American labor — that incarnates solidarity so obviously and in so many ways?

Whelan also said the bishops' brief amounted to "special pleading." I do not think the bishops' conference thought they were doing that. I think they were merely making the point that this issue is one they have been engaged on in the legislature and they believe that is where it should be resolved. Certainly, I do not look to the Catholic Supreme Court justices to side with the unions because the bishops urged them to do so. It is my hope that the justices will listen to the bishops because what they say is wise, because they surely know that our society suffers from a deficit of solidarity and it would be a mistake to harm one of the institutions that seeks to forge it, and because the founding fathers who drafted the Constitution were not libertarians. Whatever their motivations, and those motivations were more complex than many legal scholars acknowledge, their sentiments were whiggish and Lockean, not libertarian and Hayekian. If the conservatives on the Supreme Court truly believe what they state in so many other cases about judicial restraint, about fear of federal overreach, about valuing precedent, they will take the bishops' sage counsel and let those workers who wish to form a union do so as they have done before, and not be made to pay for those who do not want to pay their fair share of the costs of representing the entire workforce.

Read this next: Ed Whelan uncertain about facts of labor union case