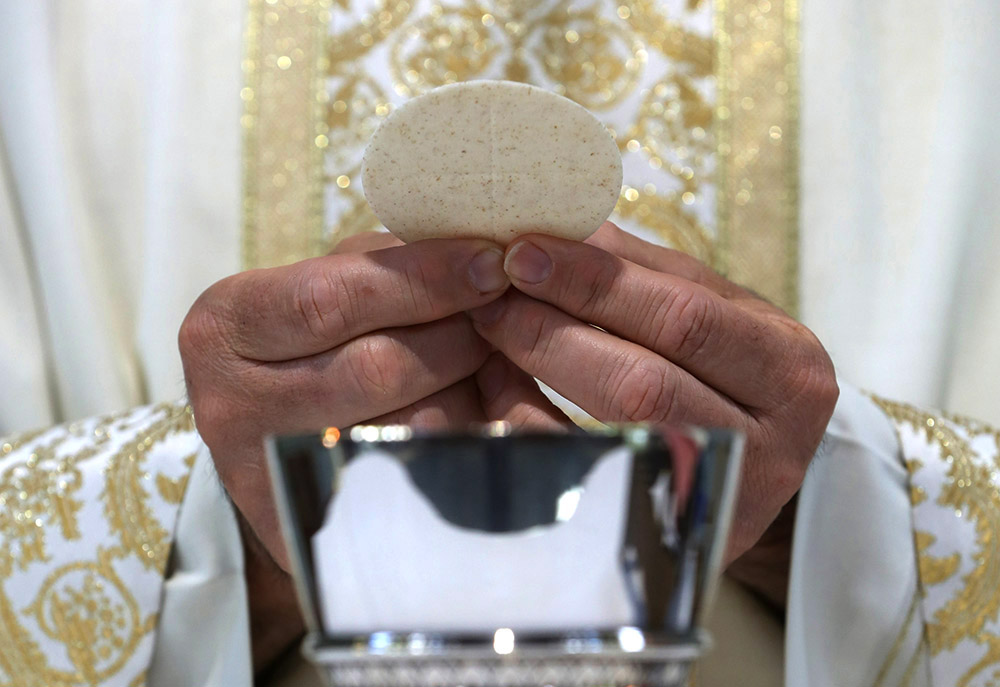 After its last meeting in June, the U.S. bishops' conference tried to walk back messaging about a document on so-called "eucharistic coherence," releasing a statement downplaying the whole issue of denying Communion to pro-choice politicians and instead noting that it was related to "declining belief and understanding of the Eucharist among the Catholic faithful," which has been of concern "for some time."

We expect to hear similar spin when the bishops meet Nov. 15-17 in Baltimore to vote on the document.

Although many of the bishops would like to backpedal this public relations train wreck, lying about it won't help rebuild trust and credibility. The truth is the document has been the pet project of a crowd of right-wing bishops — several of them committee heads — who convinced the president of the U.S. Conference of Catholic Bishops, Los Angeles Archbishop José Gomez, that it was a good idea to play hardball with Joe Biden.

Except that it wasn't. The debate over the controversial document has not only divided the bishops' conference itself, it has presented a petty, vindictive face of the church at a time when true servant leadership couldn't be more desperately needed.

It began shortly after Biden won in November, when Gomez formed a working group to address "problems" raised by a Catholic president who supports pro-choice policies.

On Inauguration Day, Gomez issued a nearly 1,200-word statement with themes proposed by the working group, offering prayers for Biden, but warning that "our new President has pledged to pursue certain policies that would advance moral evils."

Around that time, the group recommended developing the document on eucharistic "coherence or consistency."

A memo before the June meeting indicated the document would have a special section on the reception of Communion for "Catholics who are cultural, political, or parochial leaders." But during the meeting, a number of bishops insisted the document was not directed toward a particular party nor person — claims that were undermined by other bishops' repeated mentions of Biden, House Speaker Nancy Pelosi and the Democratic Party's pro-choice stance.

The contrast with Vatican voices on the matter — indeed from Pope Francis himself — could not be starker.

Back in June, the pope's representative to the U.S., Archbishop Christophe Pierre, issued repeated pleas for dialogue on the issue. This followed an intervention from the head of the Congregation for the Doctrine of the Faith, Cardinal Luis Ladaria, who had cautioned the U.S. bishops about moving ahead with the document.

More recently, Cardinal Peter Turkson, prefect of the Vatican Dicastery for the Promotion of Integral Human Development, blatantly said Biden should not be denied Communion. "The Eucharist should not in any way become a weapon," he said.

Francis, while repeatedly denouncing abortion and upholding longstanding church teaching on the matter, has also warned about the politicization of the Eucharist. When asked in September about pro-choice politicians receiving the Eucharist, he noted that he has never denied Communion to anyone.

And, of course, just last week, after meeting privately with the pope, Biden revealed that Francis called him a "good Catholic" and said he should continue to receive Communion.

A draft of the document, leaked to several media outlets, while not explicitly mentioning pro-choice politicians, does leave room for culture warrior Catholics to continue to call Biden a "bad Catholic" and campaign for the denial of Communion. And if the recent Twitter storm by several U.S. bishops after the Biden-pope meeting is any indication, it's likely that they will continue to do so.

At the very least, we suspect the discussion in the open meeting will include much pontificating and speechifying about the beauty and importance of the Eucharist. All true.

But when some prelates try to insist that understanding and respect for the sacrament is dangerously lacking among U.S. Catholics, we call their bluff. Most will be citing a flawed study with poorly worded questions — indeed the only study to find such high rates of misunderstanding about the Eucharist.

Highlighting our church's sacraments and spiritual practices is never a bad idea. But when our country is simultaneously fighting a global pandemic and embroiled in political and racial polarization, while the U.S. church is closing parishes and trying to convince young people that the church is still relevant — now may not be the best time to prioritize a culture war fight with a decent, practicing Catholic who happens to be the president.

Some bishops have become aware what a mistake this whole boondoggle has been, and may try to convince other bishops, the media and Catholics in the pews that this is merely a benign document on love of all things eucharistic.

We wish it had been, but it isn't. Don't be fooled.

This story appears in the Bishops, Biden and Communion and USCCB Fall Assembly 2021 feature series.
A version of this story appeared in the Nov 12-25, 2021 print issue under the headline: Eucharist document has always been about Biden.