Editorial: Why we support the bishops' plan to deny Communion to Biden 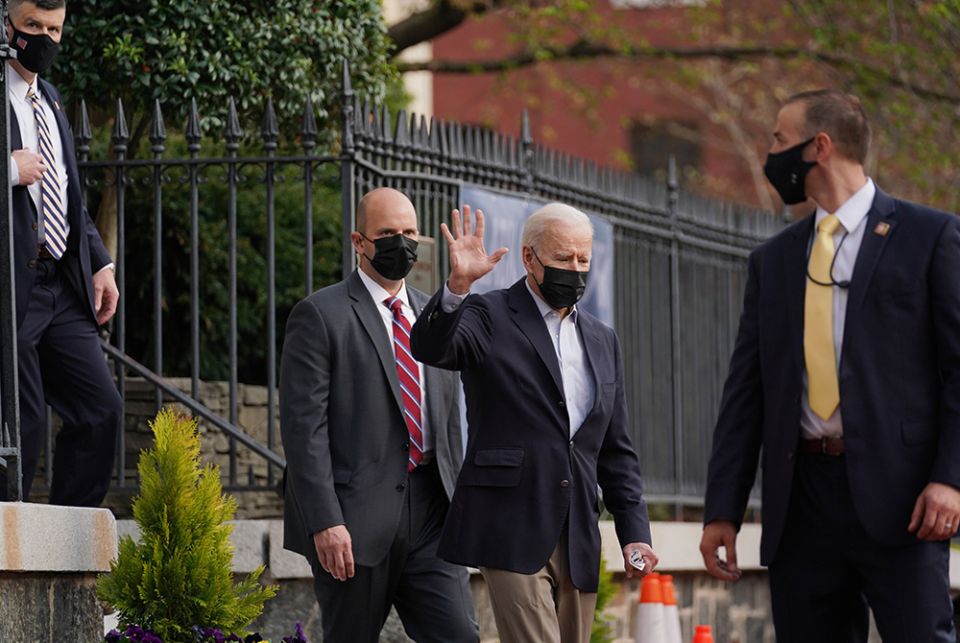 Well, it looks like — barring a last-minute intervention by Pope Francis himself, and maybe not even then — the U.S. bishops will consider and vote on a proposal for a teaching document about Communion that includes denying the sacrament to politicians who support pro-choice policies, including our nation's second Catholic president, Joe Biden.

The bishops' discussion — if you can call it that — and vote will happen at the virtual assembly June 16-18.

Just do it, so that if there happens to be a Catholic remaining who is not convinced that the bishops' conference, as it stands today, has become completely irrelevant and ineffectual, they will be crystal clear about that reality after the conference leaders move forward with this patently bad idea.

Despite plans to bury the real reason for the document in language about "eucharistic coherence," this move is clearly aimed at Biden and the practice of his faith. Although Biden has said he is personally opposed to abortion, he has, as a politician, supported his party's stance on the issue, including the most recent proposal to remove the decades-old ban on federal funding for the procedure.

The bishops' plan is a terrible idea, first and foremost, because such excessive attention to the worthiness of those receiving Communion is contrary to a proper, traditional theology of the sacraments, which sees them as "not a prize for the perfect but a powerful medicine and nourishment for the weak," as Pope Francis said in Evangelii Gaudium. (And don't let speeches about how no one believes in the Real Presence anymore sway you, as those pontificators will likely be quoting a flawed survey. Most Catholics still know to genuflect when they cross in front of the tabernacle.)

We can think of no one who needs this "powerful medicine and nourishment" more than the president, who is faced with a pandemic, massive income inequality and racial reckoning, and the most serious threats to our democracy since the Civil War, not to mention the prospect of irreversible damage to the planet. That he happens to be a lifelong, churchgoing Catholic makes this all the sadder.

Let's be honest: The bishops' proposal has little to do with theology and much to do with politics. If the bishops were actually looking for coherence of a moral sort from political actors, they would be issuing excommunication notices faster than Republicans suppress the vote.

The most tragic reality about moving forward with this proposal is that it will seal the deal on the branding of Catholicism in the United States as a culture war project.

The decision of the bishops' conference to adopt an adversarial stance toward Biden is not only pastorally wrong, it is politically stupid, given the number of areas of agreement between this administration and the bishops' own priorities. But the leadership of the conference is willing to sacrifice real accomplishments on immigration, child poverty and global warming to preen as preeminently pro-life and insist that one's stance on the politics — not even the morality — of abortion be the linchpin for reception of the body of Christ.

The most tragic reality about moving forward with this proposal is that it will seal the deal on the branding of Catholicism in the United States as a culture war project. Like much of Protestant evangelicalism in the U.S., Catholicism already is perceived by many — including many of our young people — as an extension of that portion of the Republican Party that believes the "Big Lie," promotes conspiracy theories about vaccinations and is willing to abandon all other principles to overturn a nearly 50-year-old court case — a judicial decision, by the way, that will not stop abortions from happening.

This culture war on the part of some members of the hierarchy, supported by donors with big pockets and personal economic agendas, and by right-wing media outlets that produce more propaganda than journalism, is not the church of mercy and encounter that Pope Francis is trying to offer the world. Nor does it resemble what the carpenter's son from Galilee preached and died for. Those who try to insist that denying Biden Communion is in line with Francis' earlier thought in South America may want to recall that this pope previously tried to expand — not narrow — reception of Eucharist for divorced and remarried Catholics. And they need to read all of the 2007 Aparecida document from CELAM (the Latin American bishops' council), not just cherry-pick one paragraph.

This new "MAGA church," with Donald Trump instead of Jesus as its savior, has already divided U.S. Catholics. Its symbol: a pastor who is removed by his bishop after spouting anti-immigrant, racist and medically false statements, only to raise $320,000 (and counting) from right-wing supporters who refer to other Catholics as the "false church of the modern Judas."

From the Fortnight for Freedom during the Obama administration, to anti-gay marriage political campaigns and firings of LGBTQ teachers at Catholic schools, to Trump worship at the March for Life — this church for whom opposition to legal abortion is the first and only commandment will finally be complete once all those who have not prioritized Roe v. Wade in their voting decisions are banished from the Communion line.

The machinations to get this proposal through — despite interventions from within and without — are also dividing the bishops' conference itself, such that our religious leaders are serving as Exhibit No. 1 during this period of polarization, rather than as examples of how to overcome it.

Some 67 U.S. bishops — about one quarter of the conference — put their names to a letter pleading with their brothers to delay this foolhardy plan. We suspect there are more — including some, such as Cardinal Timothy Dolan of New York, who first signed the letter then had his name removed — who agree with the plea to slow down this process. This means the document is unlikely to become actual law, since it needs both a two-thirds vote in favor plus approval by Rome.

The latter seems impossible, given the previous intervention from the Vatican, which tried to help the conference save itself by sending a politely worded warning to slow down on this rush to judgment. In fact, last month's letter from Cardinal Luis Ladaria, the prefect of the Congregation for the Doctrine of the Faith, might have been too polite, as some conservative bishops and their in-the-pocket media have tried to spin the letter as saying the exact opposite. 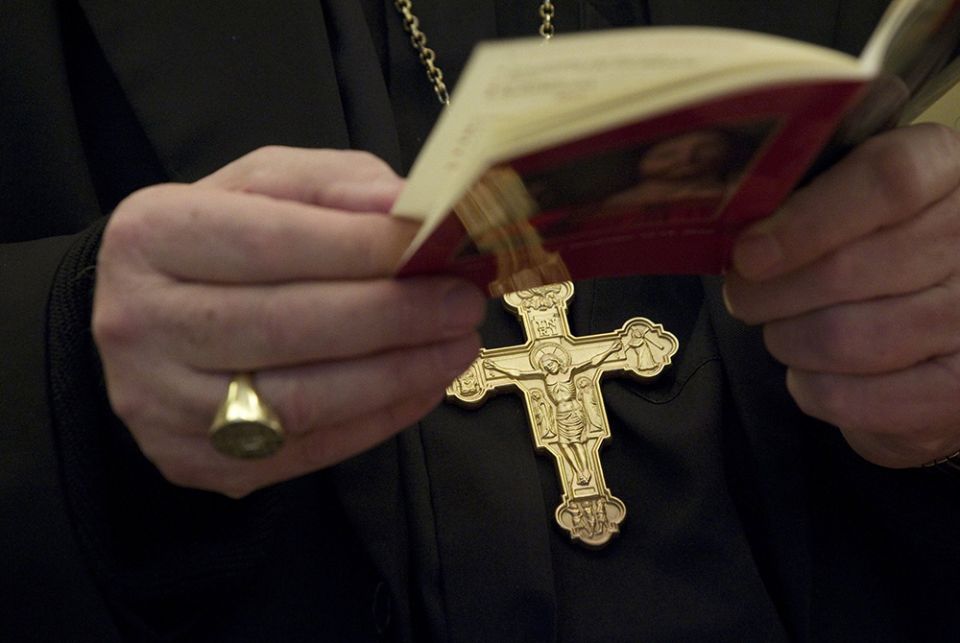 A bishop holds a prayer book during the morning prayer on the second day of the U.S. bishops' annual fall meeting in Baltimore Nov. 13, 2012. (CNS/Nancy Phelan Wiechec)

So, go ahead: Use this virtual meeting — in which the bishops won't really have the chance to talk frankly and freely with one another, whether in the meeting hall, at coffee breaks, or during dinners and other get-togethers — and ram through a document that will forever brand the church in the U.S. for the out-of-touch, cultural warrior-obsessed organization it has become.

The June vote will only be about an outline, but the script is already written. No matter what happens or doesn't happen down the line, the media will have already run the story: "Catholics judge and deny Biden the practice of his own faith." The damage will be done. TV crews will follow Biden (and other Catholic Democrats including House Speaker Nancy Pelosi, Illinois Sen. Dick Durbin and others) to see if they are being escorted out of church or not.

Those of us who follow internal church politics for a living have known for a long time that this current flock of bishops — a large majority still named during the papacies of John Paul II or Benedict XVI — is either lazy, out of touch, in the pockets of wealthy donors pushing a political agenda, or all of the above. (Yes, there are wonderful individual men who serve in the U.S. episcopacy, but we are talking about the official body of the conference, which represents them all.)

Maybe some everyday Catholics — in their busyness trying to put food on the table, raise kids in the faith and keep everyone alive and well during a global pandemic — have missed that their leaders would rather play politics and pick a schoolyard fight to distract from their own ineffectiveness.

If the U.S. bishops are not going to act like true followers of Jesus and leaders of his church on earth, then they might as well go ahead and pick that fight. At least then, it will be clear to all what they're really about.

A version of this story appeared in the June 11-24, 2021 print issue under the headline: Why we support the bishops' plan to deny Communion to Biden .

Editorial | Editorial: Why we support the bishops' plan to deny Communion to Biden

US bishops to choose culture war or communion in Baltimore

Thank God for Pope Francis: Now, if only our culture war bishops would listen to him.

Can the US church manage the synodal path?