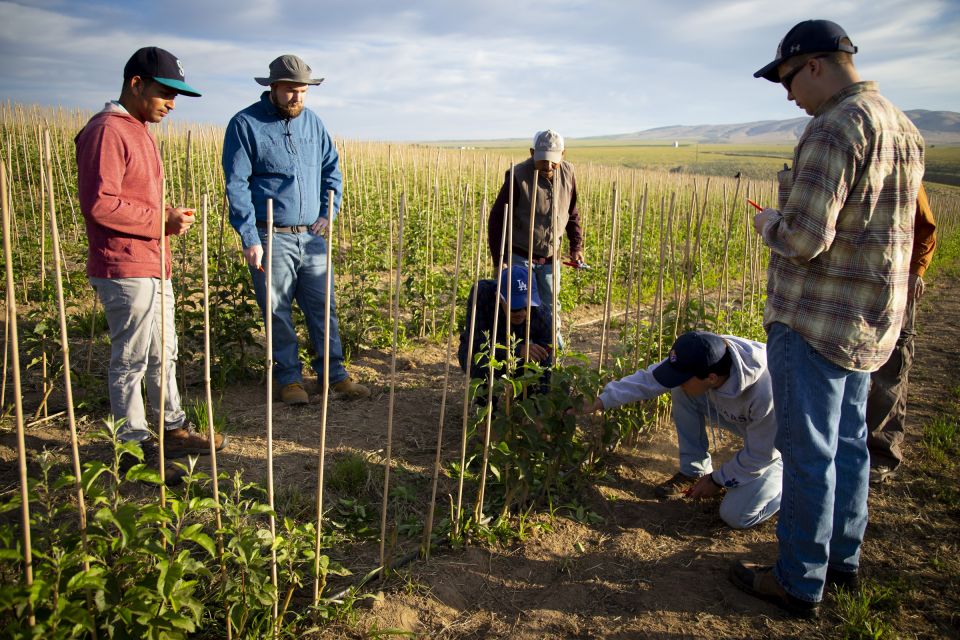 Seminarians learn how to prune young apple trees at an orchard in Prosser, Washington, from a migrant worker May 29, their first day in a summer migrant ministry program. All seminarians from the Diocese of Yakima are required to work in the agricultural fields with migrant laborers as part of their formation. (CNS photo/Chaz Muth)

Earlier this year the journalist David Epstein published his second book, titled Range: Why Generalists Triumph in a Specialized World. The book is an engaging response to earlier bestsellers that have emphasized specialization, concentration and repetition as the universal path to success. You may remember Malcolm Gladwell's 2008 book Outliers: The Story of Success, which notably championed the "10,000 hours" principle that purported that amount of practice in sport or musical training, for example, would render one a champion or virtuoso.

Or you may recall Yale law professor Amy Chua's controversial 2011 book Battle Hymn of the Tiger Mother that argued for a particular "Chinese way" of child rearing characterized by skill building, strict discipline and early specialization in contrast with a general "Western way" that prioritizes and celebrates in a nurturing manner all things particular (read: "special") about the individual child.

The overlapping advice stemming from Gladwell and Chua's respective approaches was that in order to succeed in life, career or hobby, one must commit as early as possible, dedicate as much effort and energy as possible, and sacrifice all else in order to excel at one's specialization.

Epstein disagrees with this approach. While some skills are indeed honed and perfected by thousands of hours of repetition — usually those that are performed in controlled environments like certain sports or limited contexts like that of a surgeon — most people live and work in fields that do not conform to such a setting. This is all the more true, Epstein says, within areas that measure success by flexibility, innovation and the need for creative responses. Range, not extreme specialization, is what seems to benefit people in such environments.

And yet, with the ubiquity of the "Tiger mom" and "10,000 hours" approaches in our American culture, Epstein says, "The challenge we all face is how to maintain the benefits of breath, diverse experience, interdisciplinary thinking, and delayed concentration in a world that increasingly incentivizes, even demands, hyperspecialization."

As true as this is elsewhere in society, it is also true in the field of ministry. In light of Epstein's book and as a professor who teaches religious order and lay graduate students for ministry in the Catholic Church, I found myself thinking about what lessons might be gleaned from the argument presented in Range for the church today.

It is the clergy that tend to be the hyperspecialists of a sort. When the requisite seminary system was established for all clerics at the Council of Trent in 1563 (various forms of studia and monastery schools had already existed in religious orders for centuries), it created a professional formation context that favored a narrow curriculum of philosophy and theology. After Pope Leo XIII's 1879 encyclical Aeterni Patris, which elevated St. Thomas Aquinas as the "universal doctor," the curriculum got even narrower and the pedagogy poorer with the rise of the "manualist tradition."

Rote memorization and repetition sufficed for a passing education, and while seminarians have been encouraged at times to become admirers of cultural finery (think opera and literature), until Pope John Paul II's 1992 exhortation Pastores dabo vobis, with its emphasis on the "human, spiritual, intellectual and pastoral" formation of seminarians, little attention was paid to the wide range of human pursuits in knowledge, science and art.

Priests and bishops, then, became specialists in manualist theology, able perhaps to recite catechetical propositions and juridical canons, but unprepared for the shifting realities of a fast-changing world into which they were sent to minister. Even as recently as 2006, when the current fifth edition of the "Program for Priestly Formation" was promulgated, which outlines the formation and education process for Catholic seminarians, one of the most striking changes was an increase in the requirements of philosophical study to 30 credit hours from 18. It called for more of the same.

Epstein argues that one benefit to breadth in experience, knowledge and skill is the ability to analogize and draw wisdom from seemingly unrelated areas to help forge innovation. Those who are specialists in an area — and sometimes exceptional specialists — are counterintuitively inhibited from responding creatively to situations for which they are unprepared; their thousands of hours of repetition, practice or memorization didn't prepare them for this or that unforeseen scenario.

Is it any wonder why there have been so many priests and bishops who unwittingly cause harm to those whose circumstances they do not understand? If all you have to draw on is a form of manualist or catechetical training, then what are you supposed to say to the parents of a transgender child? Or how do you come up with an authentic and creative way to reach out to a new generation if their language, way of relating and worldview is entirely alien to yours?

As painful as the reality is, I am not surprised to hear of the horror stories of priests and bishops attempting to conform the outside world or the lived realities of others to the limitations of their own experiences or understanding. It's difficult to see how four more ancient or medieval philosophy courses would help future ministers think in new ways. 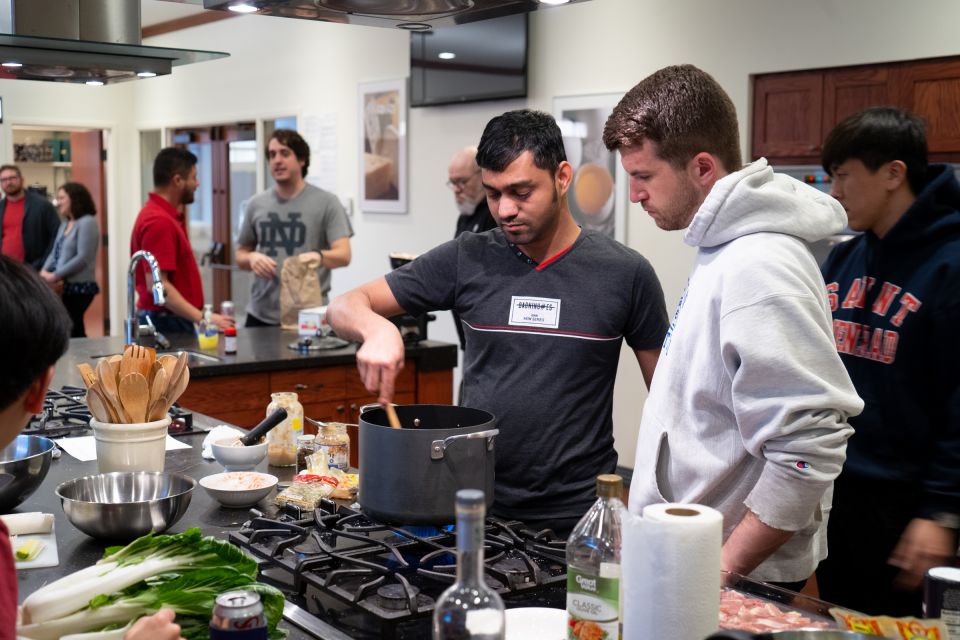 Michael Prakasam, center, a seminarian from the Diocese of Palayamkottai, India, stirs a pot of curry during a cooking class for seminarians, held at St. Meinrad Seminary and School of Theology in St. Meinrad, Indiana, Jan. 18, 2019. Seminarian Danny Taylor from Diocese of Lexington, Kentucky, looks on. The class aims to equip future priests for healthy, wholesome living. (CNS photo/Katie Rutter)

The idea of broader range means that you have other resources and tools to inform your outlook, to draw from in shaping an analogical approach to new situations beyond your experience, and to help you become more relatable and empathetic when encountering someone different from you or some idea different from your own.

As a church, we have generally rewarded specialization in the formation of our ordained ministers and discouraged breadth and range that might allow for a more open and creative pastoral responses. Such has been the case when bureaucratic priests serving largely as chancery or dicastery staff have been more likely than others to be named bishops in previous decades. With this in mind, it is no wonder that church leaders struggle in responding boldly to many of today's most pressing social issues, like racial justice and LGBTQ concerns.

To be clear, I am not against professional formation and specialization (nor is Epstein). The Master of Divinity degree is the ministerial equivalent of the M.D. for physicians and the J.D. for attorneys; each professional needs the proper specialized knowledge base. What I am interested in thinking about is how we envision the formation and mentoring of future ministers outside of the status quo of isolated seminary formation. The recent white paper published by a Boston College theological seminar on the formation of diocesan priests offers some constructive guidance along these lines. As the U.S. bishops' conference continues its work on drafting the sixth edition of the Program for Priestly Formation, which may be voted on as early as the November 2019 meeting, it seems like a good idea to read not only the Boston College paper but Epstein's fine book as well.

[Daniel P. Horan is a Franciscan friar and assistant professor of systematic theology and spirituality at Catholic Theological Union in Chicago. Follow him on twitter: @DanHoranOFM]