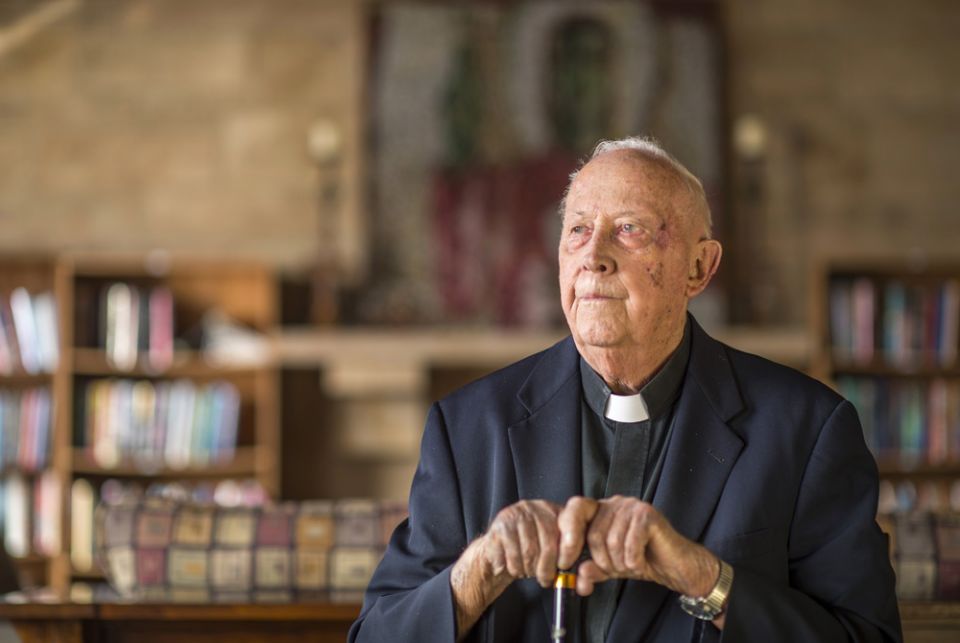 Robert Pelton, in a February 2017 portrait for ND Magazine (Barbara Johnston/Courtesy of University of Notre Dame)

The passing of Holy Cross Fr. Robert Pelton on Nov. 4 feels like the end of an era. Bob was one of the last living participants of the Second Vatican Council, which he attended as the theological attaché of Cardinal Leo Suenens, a Belgian archbishop. But Pelton's death also calls for reflection on the successes of an ongoing revolution in the global Catholic Church. Bob played a significant role in transforming the Catholic Church from a set of defensive, anti-modern institutions into an outward-facing impulse for social justice and human rights, a conversation that reverberates today at his home institution of the University of Notre Dame and far beyond its campus.

Pelton was one of handful of American Catholics of the 20th century, including the likes of Daniel Berrigan, who experienced a personal conversion amongst the poor in Latin America. In 1964, Pelton's superior sent him to serve as rector of St. George's College, an elite high school run by the Congregation of the Holy Cross in Santiago, Chile. This decision rerouted Bob's career and his relationship with God.

A talented high school swimmer with a killer backstroke, Pelton turned down an athletic scholarship to Stanford to attend Notre Dame, because he heard a calling to the priesthood. He progressed smoothly through the difficult regimens of undergraduate coursework and seminary life, demonstrating considerable intellectual and pastoral talents to his superiors. Pelton then impressed his professors in Rome, including Dominicans Reginald Garrigou-Lagrange and Yves Congar, and he returned to Notre Dame in the early 1950s with a doctorate in hand, expecting his reward to be a comfortable career as a university theologian.

But Pope John XXIII changed Bob by convening the Second Vatican Council in 1962. Pelton felt a change in the church and in himself in the mid-1960s, just as his superior asked him to depart South Bend for Santiago. By the early 1970s, Bob was back at Notre Dame, only, rather than preaching what he learned in Rome and from seminary training in the institutional church, Bob dedicated his considerable energy to creating links between Latin America and the U.S. Catholic Church. He urged the church to work with the poor and he called for a politically combative faith. He helped to create a network that brought ideas and theological politics from the south to the north in "a reverse mission." 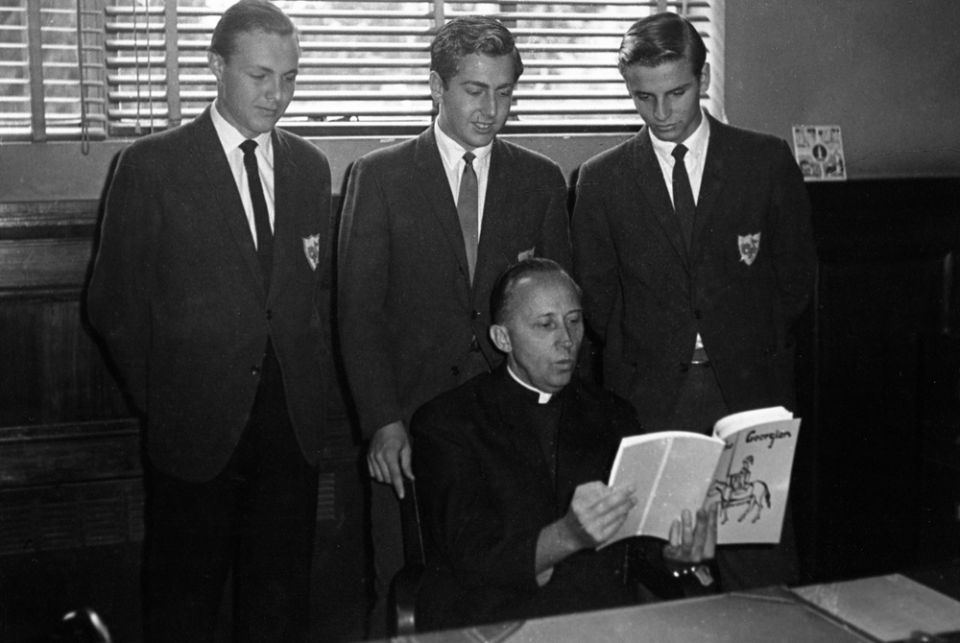 Fr. Robert Pelton in the 1960s with students of St. George's College (Courtesy of University of Notre Dame)

This initiative expressed the simple yet radical belief that the colonized had more to teach colonizers than vice versa. When the 21st century church talks about "solidarity with the poor," "human rights," "real faith," "going to the people," "building bridges," and "being with the people," we are using a language that Bob, and the men and women like him, taught us to speak. His death at the age of 98 calls on American Catholics to appreciate his career and to dwell on how much remains to be done in the future in the name of global social justice.

I arrived at the University of Notre Dame in the fall of 2017 to begin an appointment as a postdoctoral scholar at the Cushwa Center for the Study of American Catholicism. After just a few weeks on campus, Cushwa Center director Kathleen Sprows Cummings handed me my first assignment: conduct a series of interviews with Fr. Pelton, an institutional legend. Bob and I met five times over the fall of 2017 in a cramped but state-of-the-art recording studio located in the Notre Dame football stadium. At the time of our chats, when he was 96, Bob was his witty self; he remained theologically sharp and full of panache during our hourlong sessions.

I quickly grew to like our meetings, which were welcome interruptions in my writing routine. Bob always asked me about my son Killian, who entered the world in November 2017, requiring us to alter our interview schedule. After the interview, we would wait together in the cold South Bend winter air for a security guard to come pick Bob up and drive him back to his room on the other side of campus.

I came to see Bob as embodying the transformation of the global Catholic Church over the course of the 20th century, a key point of an article I wrote for Cushwa's American Catholic Studies Newsletter. Father Bob worked with elite Chileans at St. George during the day but slipped out of the school frequently to talk with Santiago's poor. Poor Chileans converted Bob to a Catholic faith that required thorough de-institutionalization in order to focus its energy on building community and solidarity with the marginalized. Faith had to be, as he told me, "in the heart" or "at the gut level." The church should "build bridges" and be in touch with social and political "reality." The church ought to become truly global, not just Roman or European, a sentiment Bob shared with his close friend and archbishop of Panama, Marcos McGrath, who he first met in the seminary. These sentiments seem so familiar to us today because Bob spoke them with such frequency and urgency throughout the 1960s and 1970s. 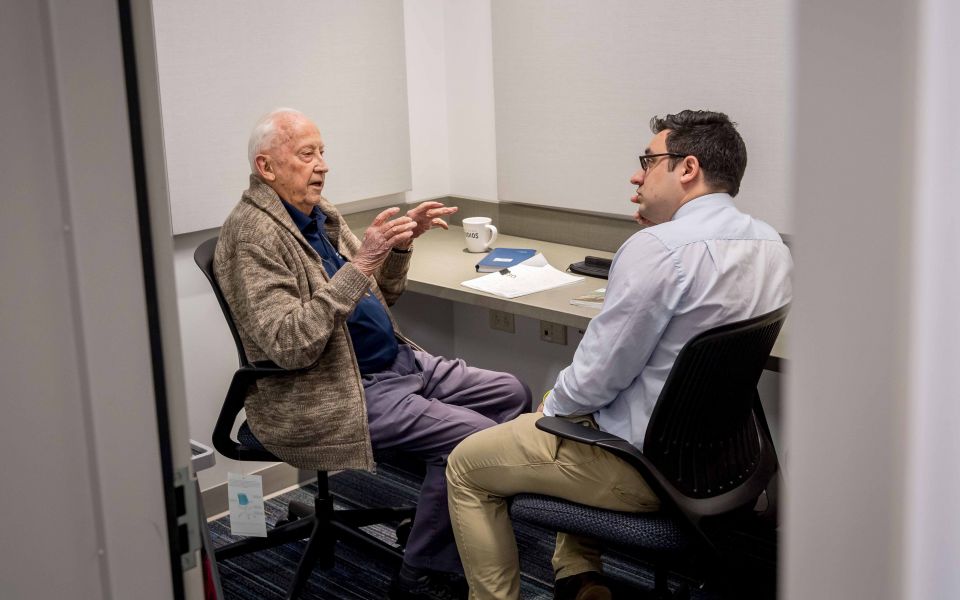 Fr. Robert Pelton speaks with the author during an interview in 2017 (Courtesy of University of Notre Dame)

He risked his life, quite literally, to deepen the church's commitment to human rights. Bob went back to Chile in 1972, just before the Central Intelligence Agency and the United States government helped Gen. Augusto Pinochet take power from socialist Salvador Allende. Bob smuggled a report by the Committee of Cooperation for Peace back to the United States when he returned from his visit. He concealed the report under his shirt as guards interrogated him about why he returned to Chile. He would have been detained, or executed, had the officers performed a body search. The report made it back to America, and the Ford Foundation published it, detailing Pinochet's abductions, murders and mass incarcerations for a wide audience.

One of Pelton's major legacies is the globalization of Notre Dame and the wider American Catholic Church. In 1985, Bob founded Latin American/North American Church Concerns, or LANACC, an important organization for importing theologies and politics from the global south to an American, and, as he saw it, a "materialist," north. Pelton institutionalized the "reverse mission." Deeply connected to globalization is Bob's conviction that the Catholic Church must be in the business of politics. Bob manifested his politicization of faith with his deep devotion to Oscar Romero. In 2011, Pelton produced a documentary, "Monseñor: The Last Journey of Óscar Romero," which recounted Romero's stand against the military dictatorship in El Salvador. Pelton instituted Romero Days at Notre Dame, an annual memorialization of the assassination of Romero featuring lectures on his political theology. He wanted American Catholics to think globally, to use Latin American sources to become conscious of oppression in the political realm. 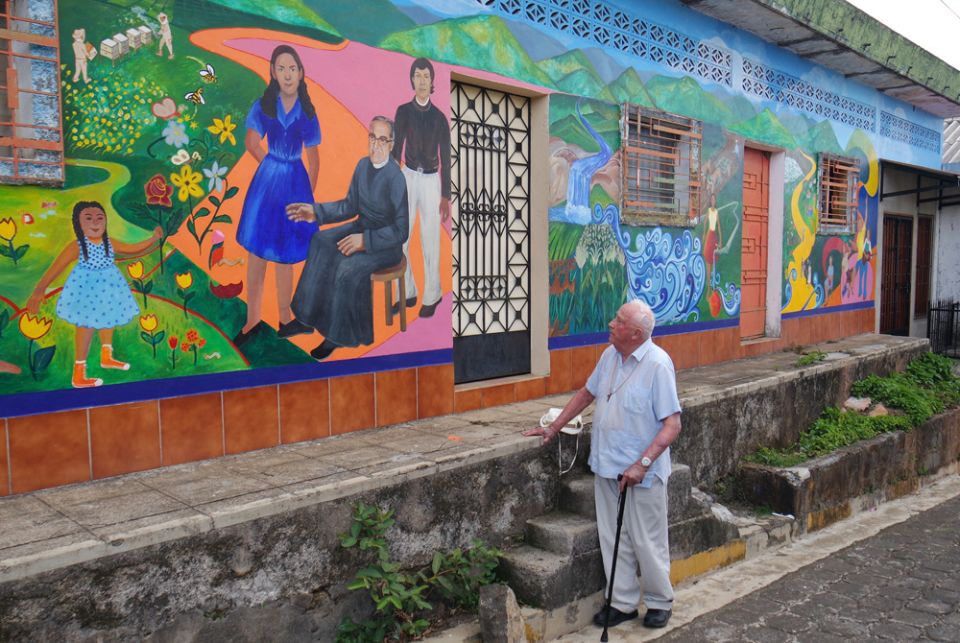 It was Pelton's dream to see a highly politicized faith take root at Notre Dame and then spread throughout North America. When I asked him what he really wanted students to take from studying Romero's stand against political power, he replied, "Stand up to [them]. Say it publicly," he said, adding, "If you don't do it, why are you representing the Gospel?"

More than a theological lesson or a political consciousness, perhaps we can learn from the life of Bob Pelton that as Christians we must always be striving for personal conversion towards an active commitment to the common good. Bob never stopped working, dedicating all of his efforts to the church and to Christ. I last saw Bob at a conference Cushwa organized in April 2018 called Catholicism and Global History. He asked about my son and how I was holding up as a new parent (just barely, I told him). He had just delivered a paper on the history of the 20th century Chilean church. I heard from a friend several months later that Bob Pelton flew to Rome, at the age of 97, to see Pope Francis, a hero of his, canonize Óscar Romero. I'm happy that Bob got to witness Romero become a saint in this world, and I have faith he joined him in the next. Father Bob, pray for us. I will never forget you.

[Peter Cajka teaches in the Department of American Studies at the University of Notre Dame and serves as a faculty affiliate for the Cushwa Center for the Study of American Catholicism. His book, Follow Your Conscience: How the Catholic Church Transformed American Freedom with a Medieval Idea, is under contract with the University of Chicago Press.]

We're huge Notre Dame football fans, but should they even be playing this fall?

Thanks to Joan Kroc, hamburger billions went to charity

Why write the story of the allegations against John Howard Yoder?