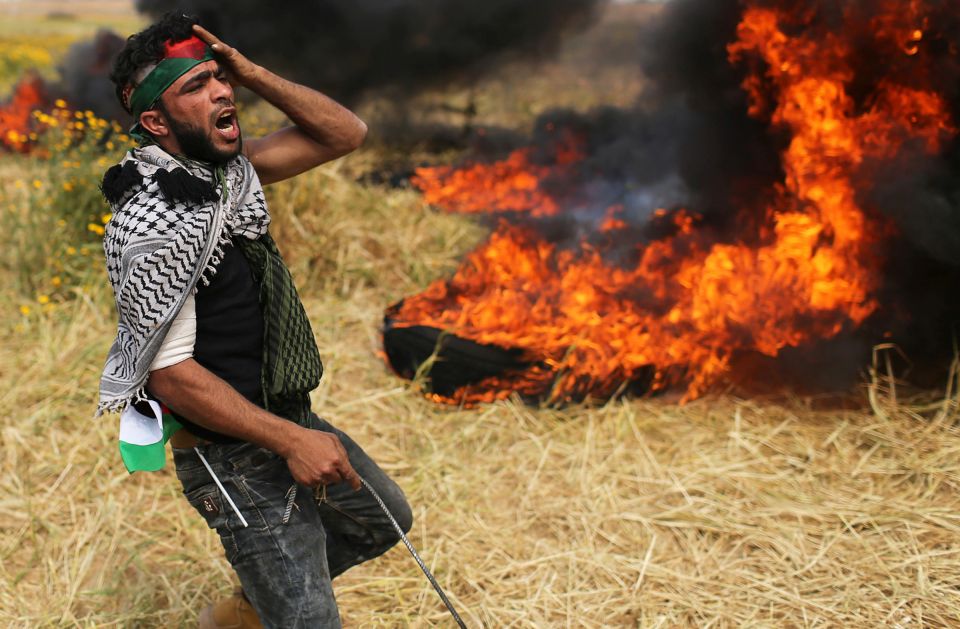 When Palestinians living in Gaza announced that they would be beginning six weeks of demonstrations at the Gaza-Israel border on March 30, it was entirely predictable what would happen.

The demonstrations were meant to raise awareness about the hundreds of thousands of Palestinians who were displaced from their lands and homes during the establishment of the state of Israel in 1948. They are bracketed by two important anniversaries.

March 30 is the anniversary of Land Day when six Palestinian citizens of Israel were killed by Israeli police in 1976 as they protested the confiscation of thousands of acres of their land. May 15, when the demonstrations are scheduled to end, commemorates the 70th anniversary of this national Palestinian trauma known as the Nakba or "Disaster."

As planned, thousands of Palestinians marched to the heavily fortified eastern boundary between Gaza and Israel on Friday, March 30, in a symbolic show of return to their land and the homes from which they and their families originate. In response, Israel deployed more snipers, helicopters and tanks to confront the protesters. The stage was now set for the tragically predictable events to begin.

By day's end, the Ministry of Health in Gaza had reported 15 Palestinians killed with live ammunition by Israeli snipers with more than 1,400 injured. This, even though not a single Israeli soldier was harmed or even in any danger, dug in as they were behind massive sand mounds.

Concurrent with the Palestinian casualties, the Israeli army and government propaganda apparatus swung into action, wasting no time blaming the 15 Palestinians killed by Israeli army snipers for their own deaths. Sophisticated graphics were released within hours and slick talking points made the claim that Israel was defending its sovereign border from attack.

The absurdity of this would be laughable if the results had not been so deadly. While the demonstrating Palestinians were obviously angry, the protests were overwhelmingly peaceful. It is true that small groups among the thousands of demonstrating Palestinians were "armed" with burning tires, rocks or fireworks. But the premise that a heavily defended barrier, consisting of a multi-layered electrified fence reinforced with coils of barbed wire, behind which were tanks, artillery, helicopters and snipers, was in danger of being breached defies reason. It is simply meant to distract from the reason behind the protests, the disproportionate force used and the resulting Palestinian deaths.

The Israeli army initially tweeted that "Nothing was carried out uncontrolled; everything was accurate and measured, and we know where every bullet landed." Israel's defense minister said that "our troops deserve a medal."

Videos taken on the scene contradicted this narrative. They show Israeli snipers positioned behind dirt mounds on the other side of the border barrier shooting and killing unarmed protesters, who were carrying neither weapons nor rocks and who posed absolutely no threat to Israeli forces. One video even has audio of Israeli snipers shouting in celebration after an unarmed Palestinian man is shot. Medal indeed.

One video shows a Palestinian man shot after standing up from concluding prayers. Another video shows soldiers shooting 19-year old Abdelfattah Abdelnabi in the back as he is running while holding a tire.

The Israeli army accused Hamas of fabricating the videos and claimed most of those killed were Hamas militants. However The Washington Post reported that there were no signs of affiliation with the Islamist group at Abdelnabi's funeral and that his family denied he was in any way connected to the group.

Even journalists wearing the worldwide recognized navy blue vest with the word PRESS emblazoned in white were not spared. Thirty-year-old Palestinian journalist Yaser Murtaja was shot in the stomach while wearing his press vest. He died hours later from his wound.

Murtaja was one of five Palestinian journalists who were shot on April 6, according to the Committee to Protect Journalists, a press-freedom group based in New York that called for a full investigation of Murtaja's death.

Hamas, which didn't originally plan the demonstrations, quickly adopted the campaign and encouraged it to continue and intensify, handing out $200 vouchers to those who were wounded near or at the border — a significant sum in the Palestinian territory, where unemployment is at 45 percent.

Accompanying this were grandiose statements, such as the one by the group's leader Ismail Haniya who boasted on April 8: "Last Friday we stopped at the border … Next time we don't know where the limit will be." It's a complete disconnect from reality if there ever were one.

The position of Hamas regarding the protests was explained by Omar Shaban, an economist and political analyst in Gaza, who said Hamas is looking to shore up its standing in Gaza and distract its Palestinian inhabitants from the conditions of unemployment and shortages of power and water in Gaza. "They want to prove that they are still in control," said Shaban.

Ordinary Palestinians offered additional reasons centered on frustration and anger with the hopelessness of their lives and the future. Eighteen-year-old Palestinian Hamada Zaza, who was shot in the hand after he set off fireworks towards the Israeli soldiers, told NPR's Daniel Estrin, "I want to die." He told Estrin that "there's no work." He is bored and "blames the rulers in Gaza, the Islamist militant group Hamas, for ruining Gaza."

Sameh Sarsak, a 33-year-old father and unemployed nurse said: "People are despaired from their life…They have nothing in their pocket. They have no money. They have no work ... they come here to express about their angers, nothing more."

The Israeli human rights group B'Tselem succinctly describes the situation as, "Israel could change this policy [determining life in Gaza] and significantly improve quality of life in Gaza. It could also persist in its callous, indefensible policy which sentences the nearly two million residents of the Gaza Strip to a life of abject poverty in near inhuman conditions."

The tragedy of Palestinian deaths is compounded by the responses of Israel and the United States. Calls by Palestinians, the European Union, the United Nations and Israeli human rights organizations for an independent investigation were swiftly rejected by both Israel and the Trump administration.

The Arab League, an organization of representatives of all Arab countries, held an emergency session in Cairo on April 3 to discuss the violence. There were the usual copy/paste condemnations of Israel, sympathy for the Palestinians and calls for the U.N. Security council to investigate. It would have been better that they hadn't met rather than this pathetic display of lip service and political sterility.

Palestinian deaths stood at 33 in the first two weeks of April with over four thousand injured. With demonstrations planned until May 15, these figures are certain to rise just as it is certain that once they end the only affected parties will be the grieving families of the dead Palestinians and the suffering wounded.

What is also certain is that no matter how hard Israel may try to physically wall off the Gaza Strip and its 1.8 million Palestinians, both from its own territory as well as from international consciousness, it cannot succeed. Reality is stronger than any propaganda campaign, and this long festering injustice will ultimately break through and penetrate international public awareness.

Editorial: Both sides must look for alternatives to violence in Middle East

A demographic time bomb in the Middle East