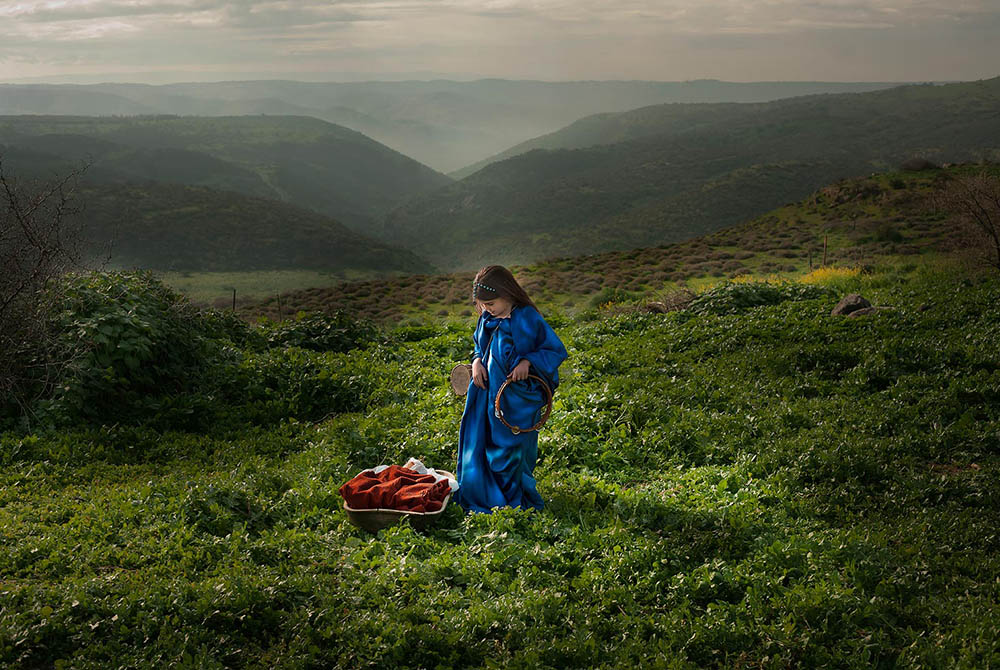 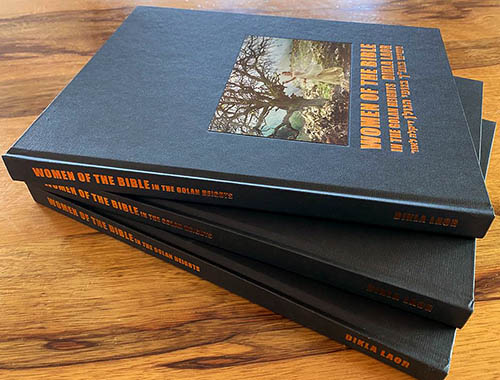 So often when many of us think of women in the Bible, Eve comes to mind. But who else? A self-published photography book, aptly called Women of the Bible, by photographer Dikla Laor, celebrates dozens of biblical women and aims to shine a light on the important roles that biblical matriarchs played in the holy texts.

"While biblical women have been instrumental to the foundations of human history, the details of their lives are hazy and their voices unclear, often glazed over in stories that are so dear to our hearts," Laor told me. "The unsung power of the women from the beginning of time is a story begging to be told."

Placing biblical women center stage in biblical history is part of the approach for the recreated scenes. For each photo, Laor, who is based in Tel Aviv, Israel, has reimagined the traditional spotlight that focused mostly on men, using her friends and family. Laor also made all the outfits that the women wear in the photos. 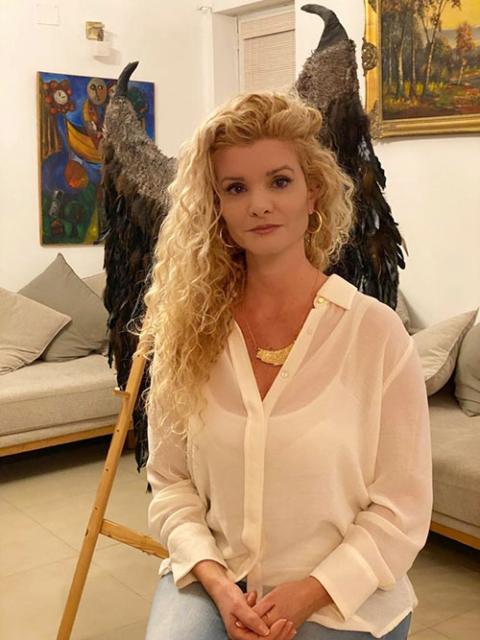 Photographer Dikla Laor, author of the book "Women of the Bible" (Courtesy of Dikla Laor)

"In this series of photographs about women, I chose to retell their biblical stories and illuminate them through the camera as saviors, women who were historically vital," said Laor. "They were strong women acting according to their will or prophecy, women who gave birth, they were vigorous and influential — they were mothers."

It all started in 2013, when she started a photo project focusing on renowned women from literature, mythology and the Bible. She started the project as a way to study the Bible herself, by recreating scenes with women, bringing the Bible's pages to life. Her goal is to shed light on religious photography through a contemporary lens, capturing powerful biblical women near the places where they once lived. In her photo series, she mentions every woman mentioned in the Hebrew Bible.

Laor included a portrait of Job's wife, Sitidos (Sitis), which got her thinking about other women in the Bible. "I learned that I have my Bible, so why feature women of the world when there's so many women in the Bible?" she asks. "I haven't been working on anything else, ever since."

Though some reports claim there are roughly 137 women in the Bible (compared to 1,300 men), Laor said that she wanted to include women who appear in dreams and in biblical visions as well, bringing the total to roughly 200 women (roughly 100 have been completed). "I want to feature them all," she said. "I have done half so far; I have another half to work on. It's a lifetime project."

All the photos are recreated by Laor and look as if she is stepping back in time. They're shot in the Golan Heights where she lives in Israel. (The mountain range continues over into Syria as well.)

It has been an ideal location for Laor — a dry, arid landscape representing the desert. It also has lush greenery that represents many different biblical settings, too. There are also bare mountains for the background, which ties into biblical symbolism. "The bare mountains connect to death, rebirth and renewal, an element expressed in the photo of Job's wife," she said. "Each setting has meaning and is a motif that hints at the stories I have read and want to depict from the Bible."

Among the women she has depicted in the ongoing series are Pharaoh's daughter, Miriam and Yocheved, Moses and Aaron's mother. 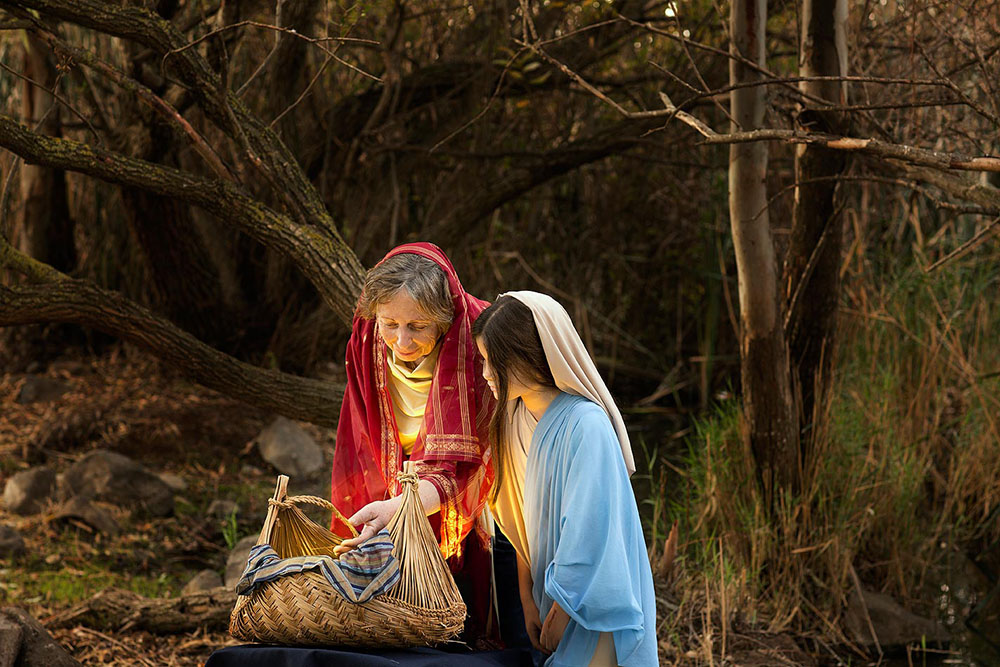 Yocheved: "And the woman conceived, and bore a son; and when she saw him that he was a goodly child, she hid him three months," Exodus 2:2. (Dikla Laor)

That's not to say that she set out to give respect where none was given before. "It's a common thought that women's voices weren't heard, or there weren't enough phrases or words about them, but they had an influence, they were really strong," said Laor.

One photo is called "Abigail," which is meant to depict Abigail standing in a field with a donkey, while holding a plate of food. Abigail was a lesser-known heroine in the Bible, a humble woman who was the wife of the wealthy Nabal of Carmel. She married the future King David after Nabal's death. She remains the only woman in the Hebrew Bible described as both "intelligent" and "beautiful."

Laor's photography of Abigail ties into the 1 Samuel 25:35 verse: "So, David received from her hand that which she had brought him. Then he said to her, 'Go up in peace to your house. Behold, I have listened to your voice, and have granted your request.' "

"The models are all people from my life, friends and family," said Laor, who made all the outfits that the women wear in the photos.

She also has photographed Eve, posing with a snake in a tree, taken from Genesis 3:1. That photo was one of the most challenging ones, says Laor. 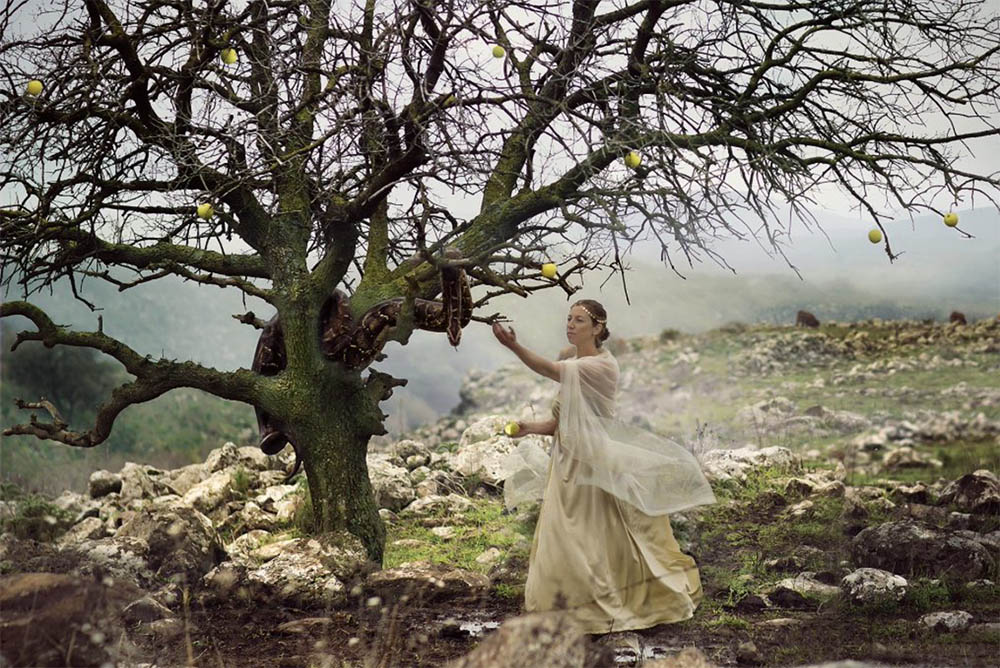 Eve: "Now the serpent was more subtle than any beast of the field which the LORD God had made. And he said unto the woman: 'Yea, hath God said: Ye shall not eat of any tree in the garden?'," Genesis 3:1. (Dikla Laor)

"That shoot was with a 70-kilo [about 150-pound] snake," she recalls. "I wanted it on the falls in Mount Hermon, but the snake didn't want to go where I wanted to take the photo. We put the snake on the tree, so this photo was designed by the snake."

There is a stunning photo of Pharaoh's daughter from Exodus 2:5, where she comes to bathe in the river with maidens walking alongside her, before she sees the basket. This photo comes across like a scene from a dream, as the women are wearing white silk and standing knee-deep in a waterbed.

There are also photos of Miriam the prophetess, Zipporah from Exodus 4:25, as well as Yocheved from Exodus 2:2, all of which are captured from the female gaze. "I had the privilege of retelling these stories of women in the Bible in the present day from my own point of view," said Laor.

Each photo feels like it could be a 15th-century painting. "I'm influenced by classical art, like Baroque and Renaissance painting," said Laor, as works by Michelangelo, da Vinci and Botticelli come to mind while looking at her work.

This series is an important contribution to help viewers think more deeply about women in the Bible, women they may have previously overlooked or not known about at all.

"I wanted to revive these wonderful figures, and to ignite the curiosity of the viewer who oftentimes have not read the stories," she said.

The most meaningful photo is Yocheved, a photo that features Laor's 85-year-old mother, who is wearing a 100-year-old cloak that once belonged to Laor's grandfather. "It's my most sentimental picture," she said.

"The mission of Women of the Bible is to tell the stories of the untold, give a voice to the silenced," said Laor, "and shine a light on those hidden in the shadows."