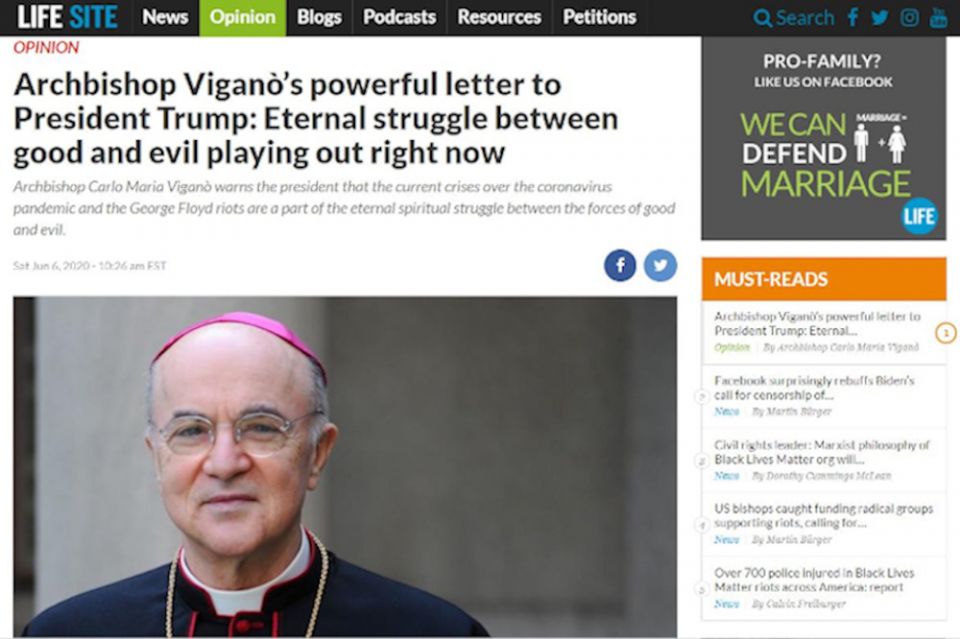 It's very unlikely that you've ever read my column. But those who do would never think that you and I have anything in common. But we do. We share the kind of Catholic imagination that sees resistance and revolutions as cosmic battles.

I read with interest your recent letter to President Donald Trump. I must say, it looks like you took your tactics from the playbook of your brother prelate New York Cardinal Timothy Dolan. You massaged Trump's ego and you were rewarded with something both you and the president crave insatiably: attention.

You explain that the so-called "children of light" are the object of discrimination: "The good are held hostage by the wicked and by those who help them either out of self-interest or fearfulness."

A lot of my colleagues have chalked off your letter as the ravings of a troubled, celebrity-seeking schismatic. It's not that I disagree with them, I just think it is important to let you know that I see what you're doing. And it's important to recognize because a lot of right-wing folks who are much less histrionic, but far more influential than you are doing the same thing.

All of you are using the oldest trick in the fundamentalist book: distorting reality so that you appear to be under siege. It's the kind of rhetoric that got Trump elected once and could get him reelected.

Religious extremists thrive on the notion that they are constantly embattled, even though in most cases they represent the majority and have an overabundance of clout. Think about it, over one-fifth of the U.S. population is Catholic. That's over 51 million people, nearly 60% of whom are white. Right-wing Catholics fill our highest courts and others use their personal fortunes to leverage political influence.

Similarly, conservative Evangelicals make up 25% of the U.S. population. That's nearly 60 million people, 76% of whom are white. They fill our legislature and fervently support our president. A number of them are also super rich and lead powerful, extremist lobbies, like the Family Research Council. And, yet, they too have constructed this narrative of being in crisis and under threat from "the world."

I imagine your heart swelled when you witnessed the president tear gas the "children of darkness" so that he could stand in front of a church with which he had no affiliation and wave a bible. It was the perfect signal to right-wing Christians that, yes, our beliefs are under attack, but we will prevail. God is on our side.

But who is this God you all believe in? As I read the Gospel, Jesus came to throw down the rich, the mighty and the privileged and to set captives free. In nearly every Gospel story, Jesus lifts up those suffering discrimination or exclusion from society and religious groups.

Sadly, Christian churches still haven't grasped Jesus message, especially when it comes to racism. The Catholic Church has ugly, historic ties to slavery, as Shannen Dee Williams reminded us in NCR yesterday. And Evangelical Christians have a legacy of opposing the Civil Rights movement as "the nefarious work of leftist outsiders," as Sarah Posner wrote recently. 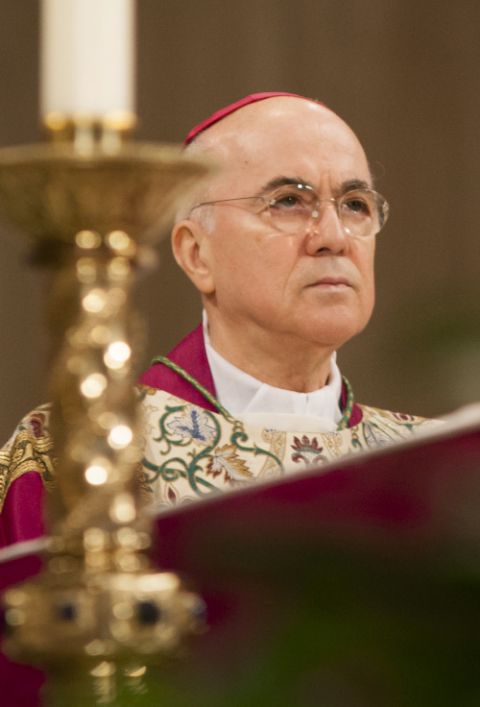 Archbishop Carlo Maria Viganò, then apostolic nuncio to the United States, concelebrates a Mass at the Basilica of the National Shrine of the Immaculate Conception in Washington in this Feb. 24, 2013, file photo. (CNS/Nancy Phelan Wiechec)

When I went to read your letter on LifeSiteNews, I was struck by how many articles on the website sowed seeds of suspicion about the "radical," "riotous," "Marxist," "anti-family" agenda of the Black Lives Matter movement. History, it seems, is repeating itself.

If you took a moment to listen to the real voices of Black Lives Matter activists, you might begin to understand that the suffering of black people in this country is the filthy residue of slavery: the 400-year old belief that the black body is not meant to be free. Black people do not feel safe in the streets, in their cars and in even their homes. They still are not free.

That is why they must topple statues that celebrate men who also did not want them to be free. Men who traded them as slaves and went to war to keep them held captive.

It's remarkable to me that the same white Catholic men who are lamenting the tearing down of these statues are the same men who cheered when a young Austrian stole sacred statues of indigenous Catholics from a church in Rome and callously batted them into the Tiber River. Can you not see the abject neocolonial, white supremacist mentality here?

Since you are so aware of the goings on in the "beloved American nation," as you call it, you probably know that another uprising took place here the day after Trump was inaugurated. It was called "The Women's March" and it brought millions of women, children and men into the streets to fight for equality. What has followed is the reckoning of the #MeToo movement and a record number of women running for elected office.

But women are not only rising up here in the U.S. Throughout Latin America, a grassroots feminist movement has mobilized in response to staggering rates of femicide and other forms of gender violence. This "green wave" has put gender politics at the center of public debate, in Argentina, Chile, Ecuador and Mexico.

On the same day your letter to the president appeared, the Vatican announced an online diploma on "feminism and Catholic identity." These courses of study seek to establish "a new feminism" and to discern "the positive and negative aspects of different feminisms." Interestingly, the course is targeted directly at South and Central American women, the very places where women are rising up. A coincidence? I doubt it.

You say that if these revolutions are allowed to persist, the world may lose its freedom. But what you really fear is a loss of power and privilege.

With all of these revolutions of people of color and women and LGBTQ people, I can understand why you feel there is an apocalypse afoot, Archbishop Viganò. Because in many ways for men like you and Trump, it is the beginning of the End Times. It is the end of the supremacy of whiteness, maleness and heterosexuality. It is the end of the fabricated moral supremacy of Christian extremism that has fostered so much of this bigotry.

You say that if these revolutions are allowed to persist, the world may lose its freedom. But what you really fear is a loss of power and privilege. Because the freer we get, the less you get to benefit from the old systems of injustice.

The power behind these supremacies is so hateful, forceful and pervasive that, yes, the battle is one of cosmic proportions. But it is not a bleak, simplistic binary of "children of light" versus "children of darkness." We are all human beings struggling to realize the good things that the Gospel tells us God wants for us: justice, freedom and hope.

Anyway, Your Excellency, I'll close there. Like you, I do tend to go on.

P.S. I hope this letter finds its way to you somehow. My understanding is you've been in hiding for nearly two years now. Maybe it's time to come out and meet those you judge so harshly. You may find we're not the ones you should be afraid of.

A version of this story appeared in the July 10-23, 2020 print issue under the headline: Dear Archbishop Viganò .

Column | Dear Archbishop Viganò: You're right, a cosmic battle is upon us