The quick and wondrous radicalization of Lucetta Scaraffia 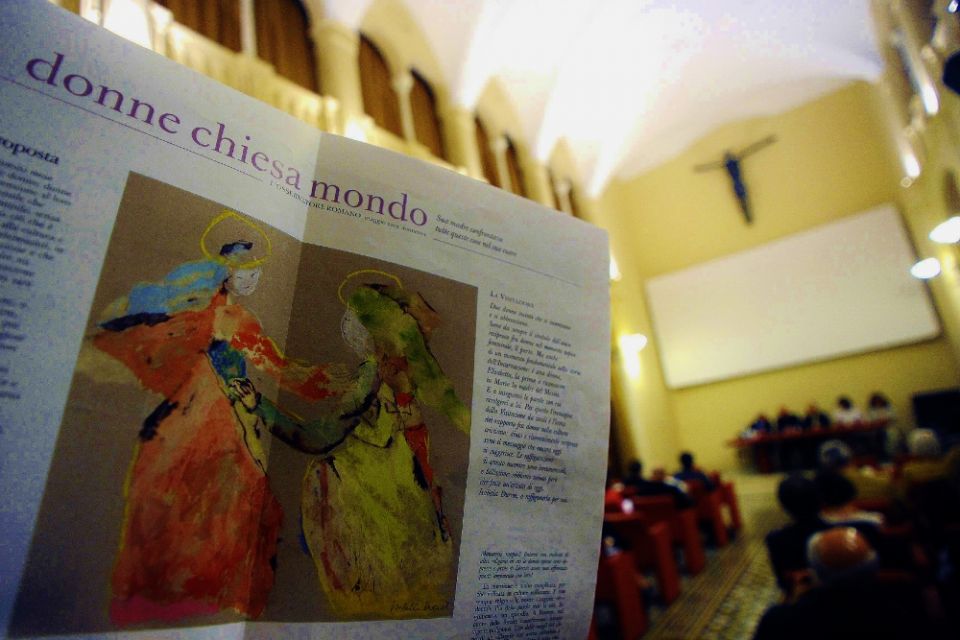 "Women Church World" is seen in this file photo. Claiming a lack of support for open dialogue and for an editorial line run by women, the director and editorial staff of the magazine insert have resigned. (CNS/L'Osservatore Romano via Reuters)

I've never actually met Lucetta Scaraffia, but last October I was in a room where she was giving a speech. It was an experience I won't soon forget.

I was in Rome covering a "Catholic Women Speak" event held just days before the start of the bishops 2018 synod on youth. 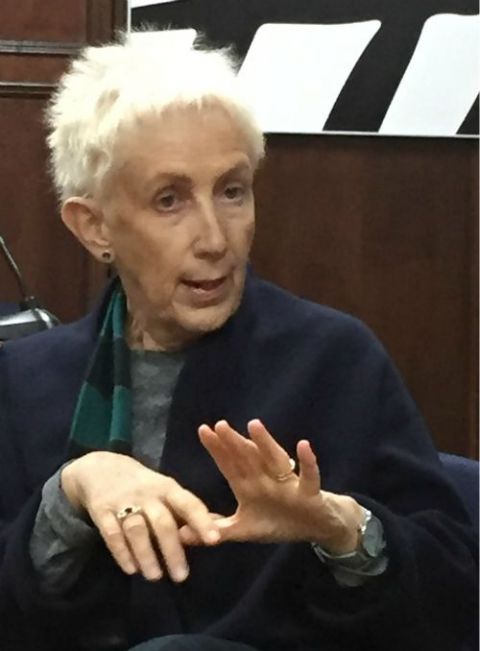 Scaraffia was the editor of Women Church World, a monthly insert in the Vatican newspaper L'Osservatore Romano. She had recently received high praise from circles of feminists and women religious for her bold March 2018 exposé on the servitude of nuns who cook and clean for bishops.

Like most Italians, Scaraffia spoke very fast and forcefully, and I was at the mercy of a translator. My fingers flew along my keyboard trying to capture as much as she was saying as possible.

It was clear to me that she was a Catholic woman who had been newly lit up by the radical injustices being perpetuated by the all-male hierarchy. She was fired up with a righteous anger, and yet at the same time her tone had a sense of exasperation.

Scaraffia was vexed, it seemed, first and foremost at herself. As Crux's Claire Giangravè also reported, she recounted a story in which she recognized her own bias against women.

In 2015, at the inauguration of the Extraordinary Jubilee of Mercy, a year-long event initiated by Pope Francis, she and her daughter attended the opening of the holy door at St. Peter's Basilica.

Scaraffia's daughter, who was not a churchgoer, pointed out that only men were walking through the holy door at the event, which was widely televised.

Scaraffia was horrified that she hadn't noticed.

"The machismo and patriarchal point of view is so strong," she said, that it had even blinded her to the obvious exclusion.

It was in recognizing her blindness that she began to see.

"I accepted a situation that was not normal, but was made to seem ordinary," she told the audience.

The issue of the sexual assault of nuns by priests was also clearly at the forefront of Scaraffia's mind that morning. She cried out that the media had become so focused on pedophilia, they were not aware that priests had been raping women and that bishops were paying for their forced abortions.

"Yes, we could become head of dicasteries," she implored, "but as long as we're being raped by bishops and priests, we're not going to change anything!"

None of us in the audience knew that she was working on an even more explosive story that would be published in February 2019, in which she would lay bare and condemn the vile legacy of nuns being sexually abused by clergy.

"I am leading a war against the patriarchy of the church," she said. "Why don't we become a nuisance in every place where women are not present?"

Listening to Scaraffia, I wondered how much longer the Vatican would tolerate this radicalized feminist, and how would she tolerate the censoring that would undoubtedly, inevitably, come her way.

So it was no surprise to me when, on March 26, Scaraffia and the all-female staff and board of Women Church World announced that they had resigned their posts, claiming that they felt "surrounded by a climate of mistrust and continual delegitimization" and that the Vatican was "returning to the antiquated and dry custom of choosing from above, under the direct control of men, women considered trustworthy."

But two aspects of their departure did surprise me, and they offer lessons for all Catholic women.

First, they all left together. Rather than allowing the men, who were attempting to regain control and decision-making power, pit them against one another, they found the courage to take the difficult path of remaining in solidarity with one another.

Second, they left loudly, writing both a bold editorial and a truth-telling open letter to Pope Francis. Far too many strong, competent, authoritative women who have had their wings clipped by churchmen have felt they needed to remain silent about what they have endured. In the same way Scaraffia and Women Church World became of voice for sexually assaulted nuns, they also became of voice for themselves telling the truth about the abuse of power they suffered at the hand of Catholic male domination.

It might surprise most people to learn that Scaraffia actually joined L'Osservatore Romano during the reign of Pope Benedict XVI. In an October 2018 article in the New Yorker, Scaraffia said that Benedict had asked his newly appointed editor, Giovanni Maria Vian, "to give women more space in the paper, which had no female reporters."

Scraffia later asked Vian for a magazine of her own, for women, and Benedict gave his approval. Thus Women Church World was born in 2012, "a stand-alone Vatican magazine as a voice for women, by women and about issues of interest to the entire Catholic Church," as the AP's Nicole Winfield describes it.

"Women Church World had enjoyed editorial independence from L'Osservatore, even while being published under its auspices," Winfield wrote March 26.

It was Francis' recently appointed director of L'Osservatore, Andrea Monda, who, it appears, was tasked with diluting or even muting Scaraffia's increasingly revolutionary voice.

Scaraffia told The Guardian that "soon after his appointment, Monda said he would also be taking over the editorship of the women's publication."

"They wanted to control all communication," said Scaraffia. "Up until [Monda's arrival], we enjoyed a very free rein. The truth is, they couldn't accept this. This situation has caused us a lot of suffering."

But rather than come down like a hammer on Scaraffia and her team, Monda seemed to employ the much slier, death-by-a-thousand-cuts approach, under the guise of being more inclusive of other women's voices.

According to the AP story, Monda claimed he was merely trying to bolster other female voices and viewpoints.

"I asked for a truly free confrontation in the daily paper, not built on the mechanism of one against the other or of closed groups," Monda said in a statement.

But Scaraffia insisted that Monda wanted to select "collaborators who guarantee obedience, and who renounce every possibility of opening up a true, free and courageous dialogue," according to an NCR report.

Just hours after the announcement, the predictable disparagements of Scaraffia's character began trickling in, some of them from more progressive wings of the church.

Some claimed that she was difficult to work with, others pointed to the fact that Scaraffia is actually rather conservative, toeing the line on the church's doctrine on women and sexuality.

As recently as that October 2018 New Yorker article, Scaraffia did claim that she accepted the church's ban on women priests and birth control pills. Nevertheless, she considers herself a feminist.

"[S]he thinks that abortion should be legal, and she believes in a merciful Church, with doctrinal walls porous enough to welcome believers who do not conform to teachings on sex and romantic love," said New Yorker writer Elizabeth Barber.

The fact that she is more conservative than the average Catholic feminist is perhaps what is most thrilling about this story. If a woman like Scaraffia isn't going to take it anymore and is emboldened enough to storm out and take her team with her, the Vatican had better start paying attention.

And Scaraffia isn't alone among more traditional women getting fed up and mobilized by the hierarchy's blatant disregard of women's voices, gifts and leadership.

A group of German women have announced a strike from May 11-18, calling on their sisters to "not set foot in a church," to dress in "white" and to stop "any voluntary service." Their campaign was galvanized not in some Protestant church basement or community center, but during an ordinary parish meeting that was intended to discuss the papal encyclical Laudato Si'.

So perhaps the departure of the staff and board of Women Church World is a bellwether of a groundswell of Catholic women who are mad as hell and aren't going to take it anymore.

Regardless, as someone who wishes there were more openly feminist women in Catholic journalism, I can only hope that Lucetta and her team are plotting to regroup, create their own media outlet and carrying on the war against the Catholic patriarchy that she declared that October morning.

[Jamie Manson is a columnist and the books editor at National Catholic Reporter. Follow her on Twitter @jamielmanson.]

Column | The quick and wondrous radicalization of Lucetta Scaraffia

Patten: Vatican media must be professional, but reform won't be pillage