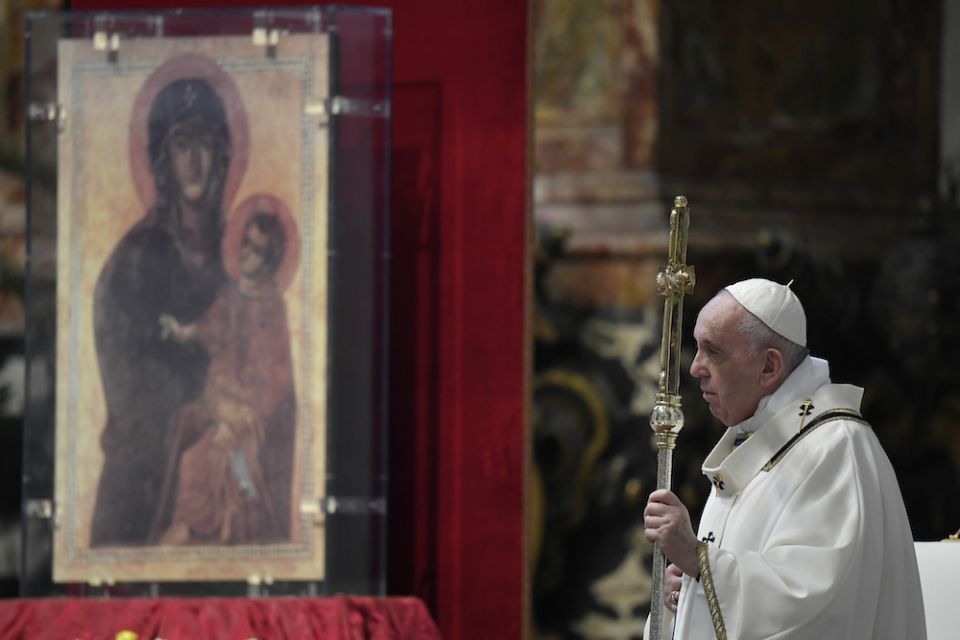 Pope Francis celebrates Easter Mass in St. Peter's Basilica at the Vatican April 12. In the background is the Marian icon, "Salus Populi Romani" (health of the Roman people). The Mass was celebrated without the presence of the public due to the coronavirus pandemic. (CNS/Vatican Media)

For those of us seeking hope in our world and in our church, last week was the best of times, and it was the worst of times. It was a tale of two Pope Francises.

One Francis was the pope of the pandemic, inspiring hope in word and action. Whether his offerings were small and delightful, like his Skype chats, or grand and powerful, like his standing alone on a stage in a torch-lit, St. Peter's Square leading the Way of the Cross on Good Friday, his presence touched and comforted millions.

Francis was similarly moving in an interview in Commonweal magazine last week, describing how he is praying more than usual and reflecting on the ways he can be closer to the people of God. He shared his hope that we will embrace the pandemic as a moment of metanoia that will help us "see the poor" and "contemplate the natural world," moving ahead into a global economy that is more human.

He discussed the need for the church to not be "closed off in institutions" but to find "the freedom of the Spirit" and take risks in ministry:

We have to learn to live in a church that exists in the tension between harmony and disorder provoked by the Holy Spirit. If you ask me which book of theology can best help you understand this, it would be the Acts of the Apostles. There you will see how the Holy Spirit deinstitutionalizes what is no longer of use, and institutionalizes the future of the church. That is the church that needs to come out of the crisis.

"I'm living this as a time of great uncertainty," he also told the magazine. "It's a time for inventing, for creativity."

But creativity, apparently, has its limits. And that's where the other Pope Francis stepped in.

Last Tuesday, the pontiff announced a new commission to study the ordination of women to the diaconate. This is the second commission in four years to take up the question, and it's made up of all new members.

The first commission, formed by Francis in 2016 in response to an inquiry from women religious at their International Union of Superiors General (UISG) meeting, was tasked with studying whether women served as deacons in the early church.

That commission, the pope has implied, ended in a hung jury. They issued a report to the pope, which he then handed over the UISG in 2019. Since then, the document has remained hidden away like one of the secrets of Fatima.

This new commission seems poised to find consensus — that women are not entitled to serve as deacons. The brief sketches of the members offered by NCR's Joshua McElwee and Crux's John Allen suggest that few of them have done academic work on the history of deacons and that none of them have expressed the belief that women ever served in a diaconate that was equal to men in the early church. 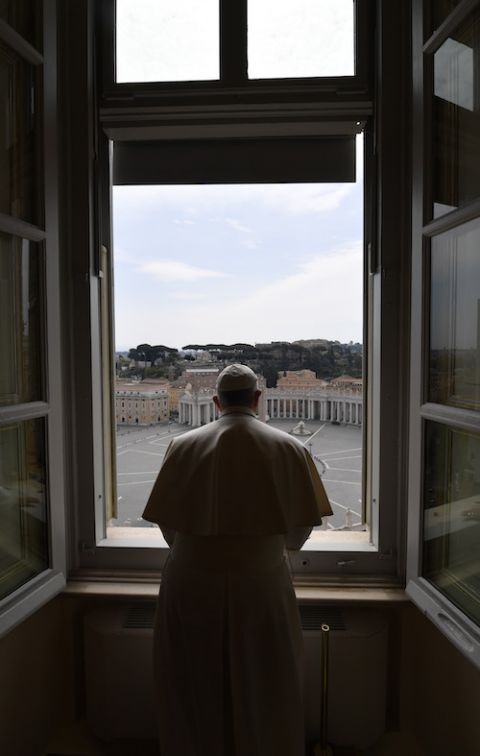 Pope Francis looks out the window of the papal library in the Apostolic Palace into an empty St. Peter's Square April 13 after reciting the "Regina Coeli" prayer via livestream. (CNS/Vatican Media)

By selecting these members for the commission, Francis has effectively killed the possibility of any real progress for women in the church. Given how long women have been asked to wait in faith and in hope to have the dignity of their work acknowledged and elevated, this turn of events is nothing short of cruel.

Equally disappointing is the fact that every commission member is either European or American. The pope returned to the question of women deacons in response to the final document of the Amazon synod, which highlighted the crucial, high-risk ministerial work of women in Amazonia. Yet the pope chose no one from "the peripheries," those places in our world to which he is always imploring us to go.

Francis was similarly disheartening last week when the Australian high court reversed the conviction of Cardinal George Pell for the sexual abuse of two minors. Pell was one of Francis' closest advisors, even though he was ideologically rigid, homophobic, a close friend of Australia's wealthy and powerful, and a climate change denier, according to a recent NCR essay by Paul Collins.

Francis remained loyal to Pell throughout his legal ordeal, refusing to speak about his case or take any disciplinary action until all legal avenues had been exhausted. Now that his conviction has been reversed, it is expected that the Vatican will drop any further investigation into his case.

During his daily Mass, just hours after the announcement came from Australia, the pope appeared to allude to Pell in his prayers.

"I would like to pray today for all those who suffer unjust sentences, due to rage [against them]," he prayed at the liturgy that was live-streamed around the world.

Shortly after Mass, the pontiff seemed to reiterate his point via Twitter:

"In these days of #Lent, we've been witnessing the persecution that Jesus underwent and how He was judged ferociously, even though He was innocent," he wrote. "Let us #PrayTogether today for all those persons who suffer due to an unjust sentence because of someone had it in for them," it said.

In these days of #Lent, we've been witnessing the persecution that Jesus underwent and how He was judged ferociously, even though He was innocent. Let us #PrayTogether today for all those persons who suffer due to an unjust sentence because of someone had it in for them.

Was the pope so blinded by his anger at Pell's tribulations that he failed to realize that such a prayer and tweet would rub salt in the wounds of countless victim-survivors of clergy sexual abuse and their families?

Members of Ending Clergy Abuse said in a statement that they were confused and dismayed by the court's reversal:

Given the history of such Vatican investigations, that are notoriously ensconced in secrecy, and Francis' deep loyalty and defense of Pell — which he dramatically affirmed today without seeming to grasp that the court was not ruling on Pell's guilt or innocence — a true and full accounting by the Vatican may seem like a doomed hope.

The Vatican's brief statement on the Pell verdict also could have been written with more sensitivity. Instead, it gave the impression that the outcome was an early Easter present:

The Holy See, which has always expressed confidence in the Australian judicial authority, welcomes the High Court's unanimous decision concerning Cardinal George Pell, acquitting him of the accusations of abuse of minors and overturning his sentence.

Entrusting his case to the court's justice, Cardinal Pell has always maintained his innocence, and has waited for the truth to be ascertained.

I'm not sure how other Catholics who follow papal news as closely as I do felt, but Francis had my head spinning this Holy Week. How could so much heart and so much heartlessness emerge from one man inside of one week?

Some days the pope was exhibiting, with prophetic words and dramatic symbols, a radical accompaniment to the worried, the sick and the dying. And on other days, he was carelessly disregarding the feelings of some of the church's most violently afflicted victims and snuffing out the tiny ray of hope that women were clinging to for their future in the church.

It almost seems like Francis' willingness to take risks for the suffering is contingent on the source of their suffering.

Those who are wounded by the world and society — the poor, the refugee, the sick, the Earth — inspire him to offer a courageous message of justice and transformation. But those harmed by the church — particularly women and the sexually abused — are still forsaken, their wounds continually re-opened by a pope whose seeming openness to change gave them hope that, someday soon, justice would reign inside their church.

Yes, the coronavirus is devastating. But misogyny and clergy sex abuse are pandemics, too. And they will continue to rage long after we have a vaccine for COVID-19. For those of us marginalized by these sicknesses inside the institutional church, the suffering of Holy Week did not give way to the hope of Easter. Instead, it left us asking, "Will the real Pope Francis please stand up?"