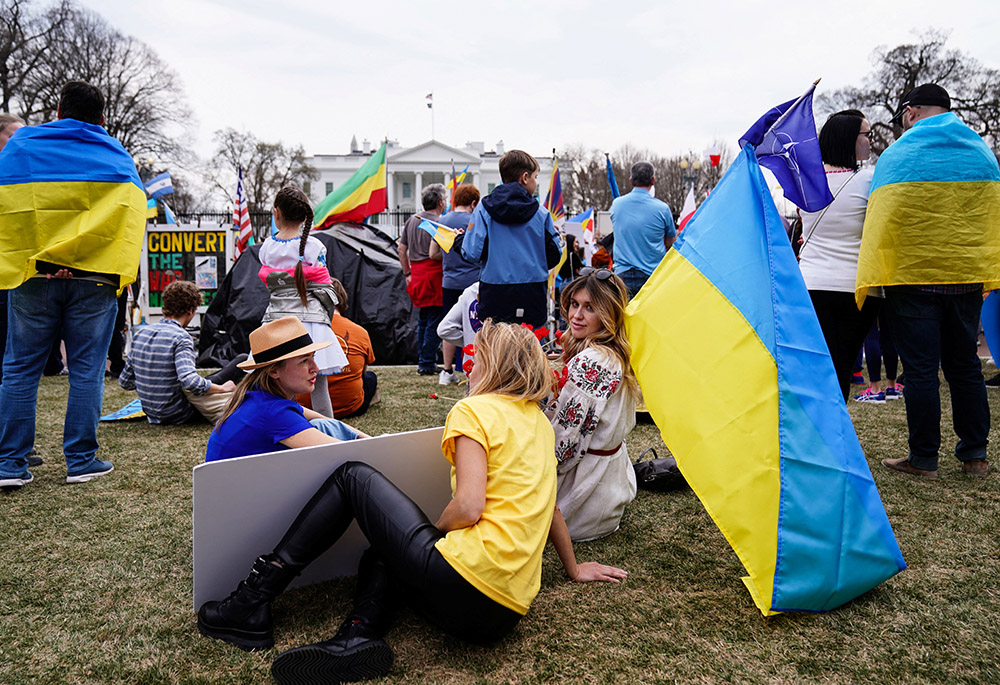 People near the White House in Washington gather for a protest March 6, against Russia's invasion of Ukraine. (CNS/Reuters/Sarah Silbiger)

I was sitting down to think the whole thing through when it happened.

This is the last review and analysis of the Christian Beatitudes from the point of view of the 21st century. I have been asking each of the Eight Beatitudes of Jesus — as recorded by the evangelist Matthew in Chapter 5, Verses 3-30 of the Christian Scriptures — to justify its own existence. To clarify for us its real function in the here and now. If, as a matter of fact, there can possibly be one. To explain to us how it is that such a spiritual program is really still useful to the modern seeker. I wanted to try to determine if these age-old values are still anywhere near pertinent to the development of an individual's spiritual life in this day and age.

Are they, in fact, still a necessary dimension of spiritual concern in modern life or merely a memory of the gentle and caring Jesus?

I got the surprise of my life: Not only are the Beatitudes nice poetic thoughts, they are more than needed. They are paramount to our own attitude shaping. They are the filters through which we must see the world.

One at a time, I began to recognize the almost unbelievable mitering of the Beatitudes with the public arena at present some 2,000 years after they were written. But even more eminent, I became conscious of the fact that every single beatitude functions that way: These scriptures — these humble Beatitudes — are a multi-dimensional guide through life for us all.

Poverty of spirit. It seemed to me — as the United States was packing up and leaving Afghanistan — poverty of spirit was more than simply a current concern. It was, I thought, lifelong proof of how it is that pride really does come before a fall. America the Great had spent years trying to turn the Afghanis who did not understand our ways, our language or our goals into a Central Asian model of us. Maybe, it seemed to say, it might be better if we supported other countries largely from the outside while they decided inside themselves who and what they really wanted to be. 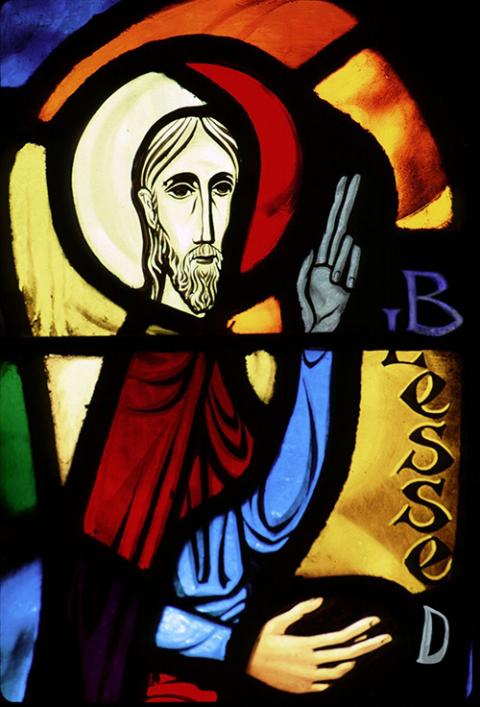 A church window depicts Jesus giving his Sermon on the Mount, which begins with the Beatitudes. (CNS/Crosiers)

The kind of meekness that makes it possible for us to hear the concerns of others makes us shapers of the future. This beatitude leads us to see that respect for the other is exactly what teaches us how to be an ethical nation, a compassionate people. It helps us appreciate other cultures. It makes us willing to take a deeper look at ourselves — the quality of our own motives and the softening of our own presence — as we stride like Hercules through the world. We are so sure that we are the brightest, the best, that we stumble in the chauvinism that makes us blind. We echo in ourselves at large the narcissism which our immediate past president was keen to point out. In the face of every challenge, he told us that he/we were "the only ones who could fix it."

Learning to mourn for those whom, as a people, we have left behind socially, economically and educationally demands an overhaul of the entire engine of society. Indeed, the great turbine of America functions for the security, the dignity and the opportunities of many but not for all. By our very lack of interest in legislation meant to equalize a democratic society, we belie the grace of mourning.

To hunger and thirst for righteousness so that life becomes an exercise in growth and possibility for everyone brings happiness, the Beatitudes declare. It is not a matter, we learn here, of simply encouraging other people to grow. It is a moral imperative that we help them to grow. That we be as solicitous for the welfare of others as we are for our own. Then we do not live for laws; we live to form attitudes within us that can serve as a mirror for others. More than that, we confirm our own values as a nation, and so become a better country ourselves.

Mercy is the beatitude that never gives up. Here we forego devotion to goodness that disguises itself in neurotic perfectionism only to get colder and more rigid with everybody else every day. It hides itself behind rule-keeping that punishes others rather than supports them as they seek their better selves. The one who has no mercy has no idea how mercy changes the world. 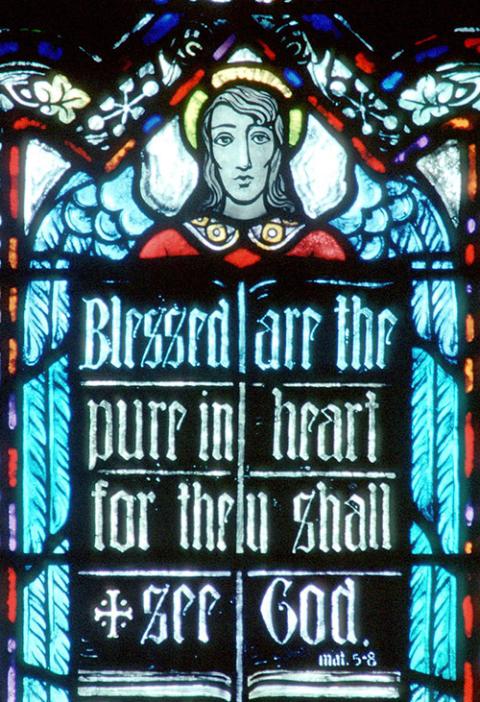 One of the Beatitudes is displayed in a church window. (CNS/Crosiers)

The pure in heart are those who do the right things for the right reason. Anything other than that cannot be trusted. Worse, doing the right thing for the wrong reasons makes us rogue Christians at best. Too often we hold up as model citizens those who ignore the needs of others in order to magnify, to inflate, themselves. The Beatitudes tell us that we cannot allow the compass of the heart to fail us in favor of celebrity when we need good the most.

Peacemakers refuse to make force an instrument of the God who gave us all free will. We are not here to develop ourselves alone. We are here to bring holy protection to every single person on the planet. It is by protecting those in the face of danger that we can bring peace to the world. Destroying others in the name of peace only makes us what we reject.

This very week, we are seeing the poor in spirit abandoned.

We have watched the meek defeated.

We have seen those who mourn struck down by the sight of the wanton wounding of the simple, the vulnerable and the innocent in the unprovoked war on Ukraine.

We have watched as all of Europe has stood up, hungering and thirsting for righteousness, by saying no to a murderous dictator. We have seen what it means to refuse to accept the unholiness of the motives driving the destruction of the innocent. We have ourselves begun to wage a battle of ideas within us about how to participate in protecting the defenseless from the threat of military might they did not foment. Peacemakers have been standing up for all saying no to suppression, no to injustice, no to the destruction of the little ones. And most holy of all, saying yes to peacemaking by refusing to add bombs to bombs.

We have seen one group, one country, one person, one leader after another risk being persecuted for standing up for justice. Finally, humanity is doing this time what the world did not do in the face of evil and under the threat of Hitler until it became far too late. 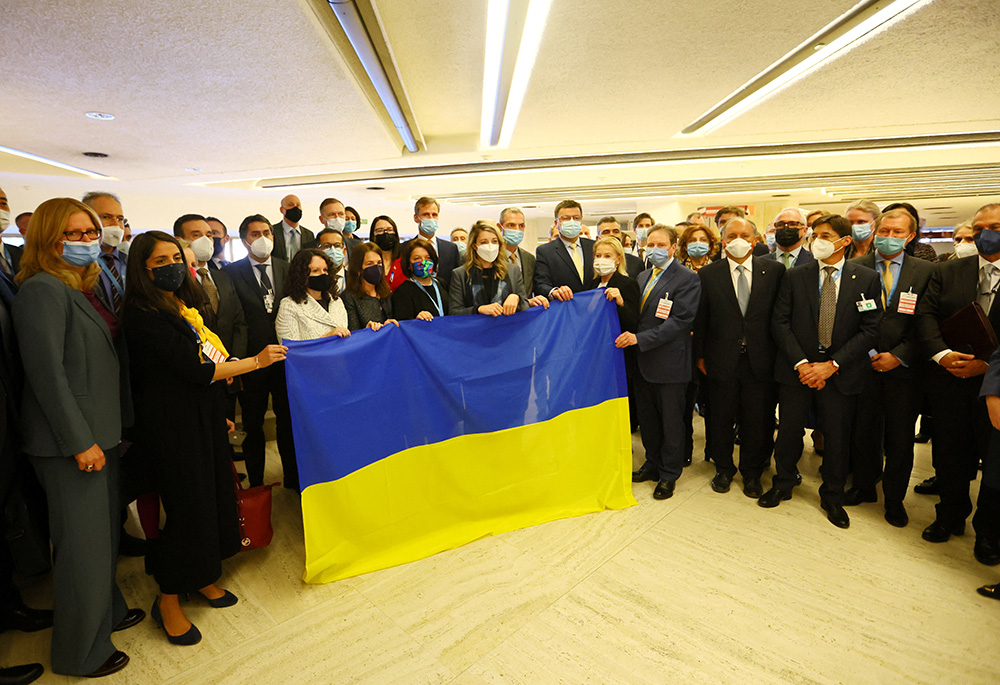 Mélanie Joly, Canada's minister of foreign affairs, Yevheniia Filipenko, Ukraine's permanent representative to the United Nations at Geneva, and other delegates gather with a Ukrainian flag after walking out of the U.N. Human Rights Council meeting during the video speech by Russian Foreign Minister Sergey Lavrov at the United Nations March 1 in Geneva. (CNS/Denis Balibouse)

So why is all this review necessary? Because the eighth beatitude is the one that really pulls it all together and makes each of them real. The sight of one isolated national president and all of you, of us, of the nations standing up to say "No!" emphatically, "not in our name, not in this place, not this time." Together, as human beings, we and other nations have insisted that the will of God for all creation be made new.

"Happy are those who are willing to be persecuted for my name's sake," the eighth beatitude says. Suddenly hope and courage and commitment and authenticity come alive. You see, it's not simply personal perfection that counts where the Beatitudes are concerned. It is the standing up together in the face of evil that is the real task.

We recognize that we may well suffer hardship — higher oil prices, more resources to care for all the refugees, possible retaliation by not only the evil dictator but by other nations that align themselves with that dictator. We are all interconnected, and so yes, when some of us stand up to the bully, we may all be persecuted in the name of God's righteousness. But to do so willingly, even in the face of persecution and privation, is the heart of the eighth beatitude and the coming of a happier and holier world.