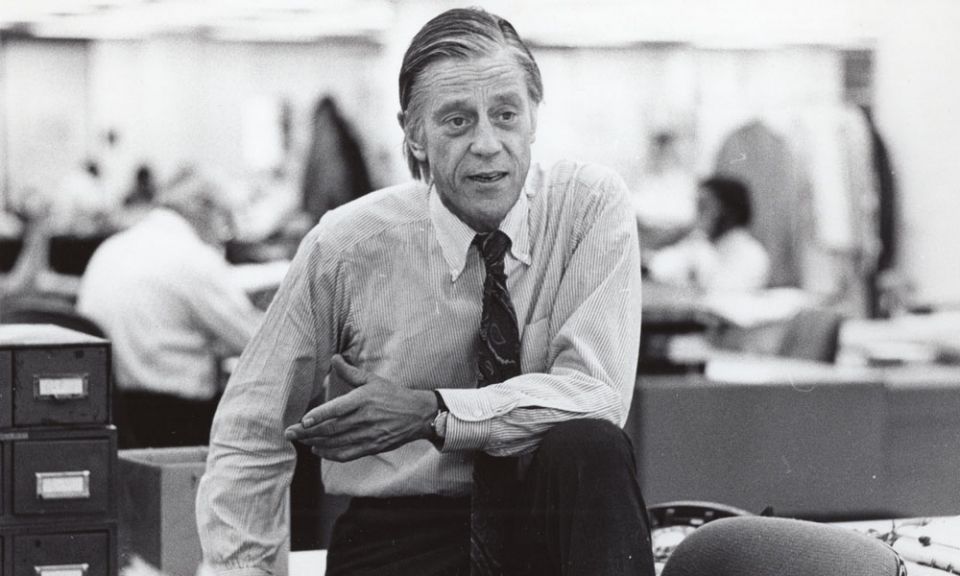 Ben Bradlee in the Washington Post newsroom, in the 1970s (Courtesy of HBO)

The Newspaperman: the Life and Times of Ben Bradlee

Most people know Ben Bradlee's name from the Watergate era (1972-1974), when as executive editor of The Washington Post, he and his men brought down President Nixon by exposing the cover-up to the break-in at the Democratic National Committee headquarters at the Watergate apartment complex in Washington, D.C. The story is told in Carl Bernstein and Bob Woodward's 1974 book All the President's Men and as a political thriller in director Alan J. Pakula's 1976 film based on the book. Jason Robards portrayed Bradlee in the film, but we got very little about his personal life and character. However, HBO's new documentary, mostly narrated by Bradlee through interviews, reveals details about Bradlee, yes, but also his close friendship with John and Jackie Kennedy. I wonder many people who lived through Camelot and Watergate know that story as it is detailed here.

Case in point: JFK's affair with Mary Pinchot Meyer. She was the sister of Bradlee's second wife, Tony, and the wife of a CIA official. Meyer's shocking and still unsolved murder a few months after the publication of the Warren Commission's findings in 1964 about JFK's assassination, as well as the involvement of the CIA, which tried to obtain her diary with so much undesirable information about JFK, are revelatory details. The film also shows that JFK didn't stop with Meyer; he once forced himself on Bradlee's wife, Tony.

"The Newspaperman" shows much about Bradlee to admire in investigative journalism and journalistic ethics, but he had personal flaws. Bradlee's close friendship with JFK and access to him led many to question Bradlee's objectivity in reporting. For example, when captured CIA pilot Gary Powers was exchanged with a Soviet spy in 1962, JFK gave the story to Bradlee. It broke in Newsweek before all other outlets.

As Bradlee states in the film, his life is "a hell of a story." And it is. From his time at Harvard, Bradlee was a subject of the university's famous 79-year-long, longitudinal Grant Study, to evaluate predictors of aging in white males. The interviews and questionnaires he answered every two years, throughout his life, frame the film. Those who analyzed his personality said that he adapted easily to new realities. Bradlee thought it was more like he ignored them and just moved on. The film attests to Bradlee's character: he was reckless, often thoughtless and he never felt guilty. A colleague sums up his attitude this way: "He played around with impunity." And he was competitive.

The Newspaperman: The Life and Times of Ben Bradlee (2017) | Official Trailer | HBO

Trailer for HBO's "The Newspaperman: The Life and Times of Ben Bradlee"

Benjamin Crowninshield "Ben" Bradlee was born on Aug. 26, 1921, in Boston. Although he was not from a very wealthy Boston Brahmin family, he went to the same private school for boys as the Kennedy's, then Harvard. He married Jean Saltonstall in 1942. She was from a prominent family whose ancestors include a judge at the Salem witch trials. When Bradlee contracted polio at the age of 14, his father Frederick coached him back to health through rigorous outdoor exercise, and was influential in developing Bradlee's fearless and reckless attitudes as one of America's premiere journalists and advocates for the First Amendment.

Bradlee graduated from Harvard in 1942 after which he was commissioned an officer in the Navy and married Saltonstall — all on the same day. He honed his leadership skills in the Navy and after World War II, worked for The Washington Post as a reporter. He was hired as a press attache for the U.S. Embassy in Paris in 1951, and then began working for Newsweek in 1953. He moved to the Post in 1965 and became the executive editor in 1968. If you check Wikipedia (or his 1995 memoir "A Good Life") a lot more happened during these years that are not covered in the film.

As a newspaperman, he wanted to live in the fast lane in a glamorous way. He became, indeed, the first celebrity editor and he loved it. But as editor of The Washington Post, he excelled. One colleague says, "He was good from the day he walked in." His goal was to make a mediocre paper great, both on the national and international scene. Carl Bernstein attests that "he had the sensibility of a reader." He also started the Style section of the paper to the dismay of many, including Henry Kissinger, who once said the paper covered his social life more than the national interest required.

The 1971 case of the Pentagon Papers, classified government documents that detailed the history of U.S. involvement in Vietnam, made the First Amendment and freedom of the press national headlines. The New York Times began publishing a multipart summary of the papers but succumbed to government pressure to cease. The Times gave the last two segments to the Post to publish. When Nixon claimed he had executive authority to force the Times and Post to cease publication, a Supreme Court case ensued (New York Times Co. v. United States) that resulted in a decision that protected the First Amendment right of the Times to print the papers. (The Pentagon Papers are the subject of Steven Spielberg's new film "The Post," due out on Dec. 22 in select theaters, Jan. 12 nationwide; it is an account of publisher Katherine Graham and Bradlee's partnership at the Post during this time.)

Next came Watergate, another showdown between the press — namely The Washington Post — and the executive branch of the U.S. government: the office of the president of the United States. The film contains a clip of the Nixon tapes where he muses about pulling the Washington Post's (Post-Newsweek) television station's license.

As I watched the film it was like déjà vu all over again. Nixon's words reverberate across the decades, and if you listen carefully, are echoed today.

Bradlee was adamant in moving forward when the White House exerted pressure over the Watergate cover-up: "National security is not an issue; embarrassment is the issue." He was compelled to take a stand and told readers, "It is not Nixon's right to tell you what you can't read." Public officials who lied "drove him nuts," and Bradlee was determined to expose them. After Nixon's resignation from the presidency, Bradlee acknowledged the absurdity of it all, "In his darkest hour, he gave the press its finest hour."

After a steady climb, the paper's reputation took a catastrophic hit in 1981, when it came to light that a 1980 Post story — about an 8-year-old heroin addict in Washington, D.C. — had been fabricated. The author, Janet Cooke, was awarded a Pulitzer for the story that later was returned. Bradlee decided to "put it all out there and admit the mistakes and learn lessons from the humiliation."

"The Newspaperman" is riveting, relevant and deeply important today when the press, and the freedom of the press, is openly targeted, harangued and demonized as "the enemy" on the national stage. Bradlee would probably go "nuts" because it is now acceptable for opinions to replace facts, and falsehoods and inaccuracies are accepted as facts, simply because of repetition. Bradlee knew the Post would be unpopular by exposing Nixon because he understood that people "lived their lives not wanting to know the truth."

Bradlee loved the pursuit of truth and encouraged his reporters, "Never get discouraged by how hard it is to find the truth." The force of Ben Bradlee was to move continually forward and not look back. After retiring from the Post in 1990, he admits he took more time for reflection but had no regrets.

"The Newspaperman: the Life and Times of Ben Bradlee," by director John Maggio, is a gift to the integrity of journalism, journalism students and educators who seek to instill the kind of critical thinking in media and public discourse that Bradlee demanded of his reporters. His third wife Sally Quinn, Carl Bernstein, Bob Woodward, other longtime Post reporters, sons Ben Jr. and Quinn, and Jim Lehrer are featured commentators. What makes this documentary stand out from others is how well it examines the personal magnetism and professional accomplishments of its subject, Ben Bradlee, who ran through the events of most of the 20th century like no one else.

As Bradlee said, "Go about our business, which is not to be loved, but to go after the truth."

A version of this story appeared in the Jan 12-25, 2018 print issue under the headline: A life pursuit of truth .

On Pope Francis, EWTN and cracking down on criticism

Sojourners pulls article about Catholic Church and race from website