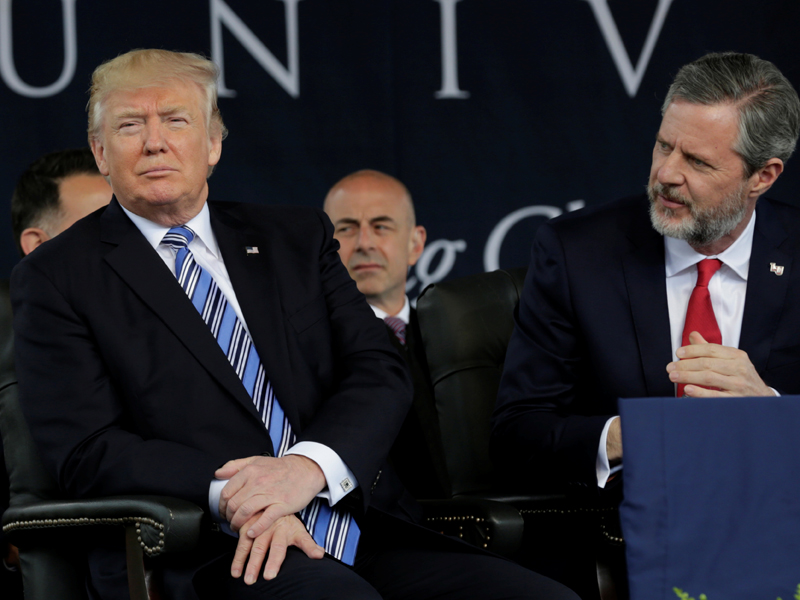 President Trump, left, sits before delivering the keynote address at Liberty University’s commencement in Lynchburg, Va., on May 13, 2017. Seated on the right is Jerry Falwell Jr., then president of Liberty University. (Yuri Gripas/Reuters)

On January 19, 1976, South Carolina’s Bob Jones University, an evangelical Christian college, lost a hard-fought battle to use its faith as an excuse to discriminate against Black students. The Internal Revenue Service stripped the university of its tax exemption — a move that infuriated evangelical leaders at the time. Paul Weyrich, a conservative political strategist and a Catholic, saw it as an opportunity. 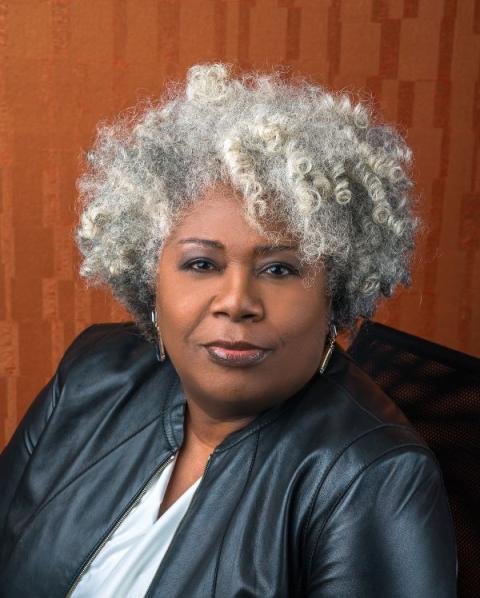 Teaming up with the televangelist Jerry Falwell Sr., Weyrich turned the university's defeat into a rallying cry, laying the groundwork for a coalition that would unite Catholics and evangelicals and lead to the rise of the religious right. The presence of a Catholic at this pivotal moment comes as no surprise to Anthea Butler, chair of religious studies at the University of Pennsylvania. As a historian of African American religion, Butler can pinpoint the social and political conditions that led to this alliance. But as a woman of faith, it's a story that grieves her.

Butler has spent time in both these faith traditions. She attended a Pentecostal church in California and later studied at an evangelical seminary. She left evangelicalism over 20 years ago to return to the Catholic faith of her childhood.

The time she spent immersed in evangelical circles left her with questions. 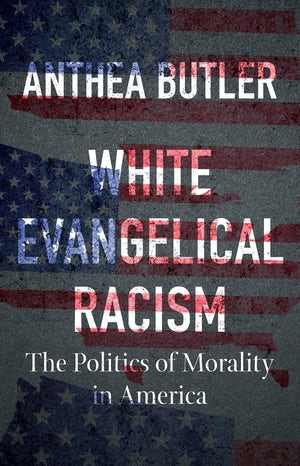 "Why is it that evangelicals have not come to grips with the racism that's been inherent in their movement?" she asked NCR. "And why [does] everybody else let them pretend that they're really moral people when this is about power, not morality?"

It is impossible to tell the history of American evangelicalism without acknowledging how racism helped shape its theology, institutions and culture, Butler said. Evangelicalism has become so synonymous with whiteness, Butler added, that evangelicals of color who enter these spaces, as she used to, must learn how to navigate white evangelicals' cultural expectations and political priorities.

The U.S. Catholic Church is not exempt from these criticisms, she added. From Georgetown University's sale of 272 enslaved people to pay off its debts in 1838 to Weyrich's harnessing of racial resentments to form an alliance on the religious right, the Catholic Church's trajectory has also been shaped by racism.

Butler worries that the political bargain Weyrich helped strike decades ago is corrupting how Catholics put their faith into action today. The partnership has caused some Catholics to act as if it is perfectly moral to support the death penalty, treat the Eucharist as a political weapon and block asylum seekers from finding refuge in the U.S., Butler said.

"Most Catholics don't understand that Catholic teaching is about the poor, or anything else, because they have aligned themselves so closely with evangelicals that they look like Catholic evangelicals instead of Catholics," she said.

Butler delved into this history in her latest book, White Evangelical Racism: The Politics of Morality in America. NCR spoke with Butler about how racism has shaped American evangelicalism and how this history implicates the U.S. Catholic Church.

This conversation has been edited for clarity and length.

NCR: What is the story white evangelicals tell themselves about how American evangelicalism has responded to racism?

Butler: Evangelicals like to tell themselves a story about how they were great about abolitionist movements and missionary work, how they were against communism. Those things are true. But there's another part to the story. People who believed in Jesus also held slaves. People who did missionary work were abusive. Rev. Dr. Martin Luther King and others were called communists because they wanted civil rights. People talked about schools and busing when the reality was, they didn't want to go to schools with Black children and they didn't want Black people to mingle and marry white people. I think it's pretty clear from this history that what evangelicals have engaged in is a kind of naivete. That naivete has given them a glamorous history, but it's not the history that's reality.

Talking about that selective view of history — in the book, you write about how Falwell responded to King's civil rights activism in 1964 by insisting that, "Preachers are not called to be politicians, but soul winners ..." Years later, Falwell founded the Moral Majority, an influential conservative lobbying group. How does race help white evangelicals draw a line between which issues are biblical and which are political?

Evangelicals like to think that personal sin is the only sin that there is. They don't like to think about structural sin. And racism is both a personal sin and a structural sin. It's personal in that if you are a racist person, you are a sinner. If you are not upset about the structural sin of racism, then you still are a sinner. And that is what evangelicals have not been able to see, that there is a structural sin in this country. If you believe you're not personally a racist but at the same time, you don't care about the racism that is embedded in the structures of this country, then I think you're complicit in it. Your individual way of trying to ask for forgiveness does not absolve you from that.

You make the argument that racism within evangelical circles hasn't disappeared today — it's just transformed in some ways into a "colorblind" gospel. Could you explain what the colorblind gospel is and how it is entangled with conservative politics?

The way that fits into conservatism is that basically, what conservatives will tell you is that everyone is equal if you just pull yourself up by your bootstraps. We know that's not true in this country. Not everyone is going to be able to have the same kind of educational opportunities or other opportunities because race plays a factor in that. If we're talking about how much a white man makes versus a white woman or a black woman or a black man, those are great disparities. How do you account for that if everyone can just pull themselves up by the bootstraps?

There's this defensive stance that's sometimes deployed when white evangelicals are accused of being complicit in systemic racism. The basic argument is that white evangelicals do care about racism, and that the way that they are doing this is by defending Black lives in the womb through their anti-abortion activism. What do you think of this defense?

What is happening here is a rhetorical argument. It's a rhetorical argument saying, "We want to value Black lives and we don't want Black babies to die either." But the reality is, once the Black baby gets here, they don't want to do anything for that Black baby. They don't want to provide it food, shelter, anything. It doesn't matter whether it's a Black baby or a white baby, as far as I'm concerned, because if we're not talking from womb to the tomb, it doesn't matter. Personally, as a Christian, you can't tell me that you care about life in the womb but at the same time, you want to be for the death penalty. This is where Catholics mess up. Because some Catholics think, "Well, I can be for the death penalty." That’s what happens when you consort with the evangelicals too much. You don't listen to Catholic teaching.

Immigration is a perfect example. White evangelicals' fear of the other makes them forget about scripture that says, "Welcome the stranger." Their response to COVID-19 is another example. Evangelicals claim that, "This is my religious freedom, we need to meet in church, we don't want to get the vaccine." That is crap. You had to get a vaccine to go to school for mumps, measles, rubella. This is political and it's the crux of the whole book. Evangelicals use so-called moral issues to gain political power. Racism is at the core of the movement, but they continue to hide it by pretending to be moral agents in society.

How is all of this impacting evangelicals' witness — how could it impact the future of this movement, especially as America becomes more and more diverse?

Catholics' trajectory in all of this is especially interesting because of how they were initially victims of discrimination in this country. But by the 1970s, with the formation of the religious right, the tables had turned. Could you talk about that history — how does the American Catholic church fit into this arc you've painted for American evangelicalism?

Catholics have racial problems of their own. There were Catholic slaveholders and Catholic religious orders that held slaves. Catholics are not immune to this, they are not exempt from this critique of white evangelical racism. In addition to that, the Catholic Church, because of its immigrant status, has always wanted to fit in with white Protestants. They have aligned with white evangelical racism and have bought into some of these racialized ideas that have made them vote certain kinds of ways and behave in certain kinds of ways. We have a good number of white Catholics who have voted for people like Donald Trump. They don't want immigrants, they don't want other people to come in, even though every white Catholic in this country comes from an immigrant background. By aligning themselves with evangelicals over the issue of abortion, they're also aligned on the issue of race.

Why should this history about white evangelicalism racism matter to American Catholics?

It should matter to American Catholics because many of them have bought into it. They can't see what they're supposed to be doing as faithful Catholics. This has distorted American Catholicism. Evangelicalism has politicized the U.S. Conference of Catholic Bishops. I'm talking about the politicization of the Catholic bishops over the Eucharist, over the 2020 election, how they've talked about Biden. The way they've treated a Catholic president is part and parcel of how they've been corrupted by evangelicalism. They are using the Eucharist as a political tool. It is not a political tool.

Anything else you want to add?

People tend to think I might be angry because I've written this book. It actually includes an impassioned plea for evangelicals at the end to kind of see what they've destroyed. You don't write a book like this if you're mad at people, you write it if you're disgusted and sad.