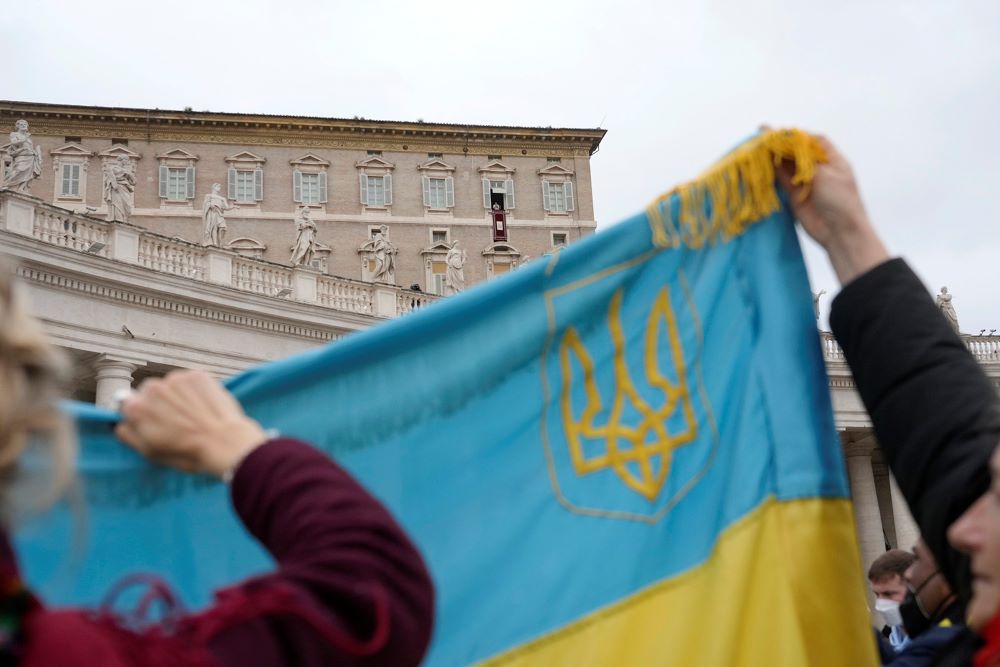 At the invitation of my brother Jesuit, Fr. Chris Smith, I recently attended Mass at the Ukrainian Catholic National Shrine of the Holy Family in Washington, D.C. Chris is a young, multitalented science teacher at Gonzaga High School who developed a love for Ukrainians and their liturgy while in college. He spent a year teaching English in Ukraine.

He knew of my interest in Ukraine because I had shared with him my experience of helping run a seminar for Ukrainian bishops shortly after the fall of the Iron Curtain and my visit to Ukraine as chair of the U.S. Commission on International Religious Freedom. His invitation was my chance to express solidarity with the Ukrainian people accompanied by someone who could help me understand what was going on.

In our black clerical clothes, the pair of us stood out in the church: me a short, old white guy struggling to know what page we were on, and Chris a tall, young Black man effortlessly singing the Ukrainian responses.

Two things struck me about the liturgy.

Second, the music, which seemed to be an uncanny mix of pain and hope. It beautifully expressed the situation of the Ukrainian people at this moment, though it came out of centuries of experience and prayer. It was the music and prayer of people who had suffered persecution, war, sickness and death, but still gathered to pray and hope for a better life, here or in the world to come.

That persecution, war and famine still exist in the 21st century is a tragedy beyond tears. Pope Francis recently condemned the war in Ukraine as "infantile and destructive aggression," the work of "some autocrat, sadly caught up in anachronistic claims of nationalist interests."

Ordinary people, on the other hand, "sense the need to build a future that will be either shared or will not be at all," the pope said.

The 20th century developed the technology to end poverty, famine and limit the impact of disease, but it also developed technology to destroy and kill on a massive scale. Too often, the world has chosen the technology of death rather than life. War and famine have continued; treatable diseases still kill. Our technology is poisoning the Earth and heating it to the point of no return.

Like the Ukrainian liturgy, the world needs to sing a song of pain and hope.

This is especially true as we approach Holy Week and Easter.

Holy Week is a time when the Christian community shares Christ's pain on the cross, his betrayal and abandonment. Christ is being crucified again in Ukraine.

The Scriptures do not give us words to explain away pain and death; rather, they give us the Son of God who is willing to descend into the trenches and suffer and die with us. Rather than encouraging us from the sidelines, he gets in the game and takes punches along with us.

The culmination of these days ahead is not the cross; it is the Resurrection. Beyond the pain there is hope. Hope in Christ; hope in the Spirit that can change hearts and inspire works of peace, justice and love.

Mir vcim. Peace be with all.