A woman helps a child to light a candle as they pray for the departed souls of their relatives at a cemetery in Dhaka, Bangladesh, during the feast of All Souls Nov. 2, 2021. (CNS/Reuters/Mohammad Ponir Hossain)

Editor's note: For many years, Maryknoll Fr. Bob McCahill has been sending an annual letter to friends at Christmastime, chronicling his experience living among the people of Bangladesh. Since 1984, NCR has published his annual letter near Christmas. The following is an edited version of his 2021 letter.

Erosion is a fearful problem in every riverside village of riverine Bangladesh. Recently, when for the first time I visited Lalpur, I asked where their village post office is. "Our post office fell into the river" came the answer. Often times, villagers can sense when the river is about to devour a chunk of the land, so they move. Other folks lose houses, stores, property or more.

At a village tea stall, I asked the men gathered there if they knew of any disabled children living nearby. (It's a question women could answer better, but they are not found at tea stalls.) Anis spoke up saying his daughter, Ayesha, is in such condition. Straight to Anis' shack we walked, where I saw the lass and put her name on my list of children who would benefit from two weeks of attention at the physiotherapy center, but only after the pandemic lockdowns end.

To see two children of one family, I bicycled to Baghra. I needed a guide through "the jungle" to the kids' home and Wazi volunteered to lead me there. When we reached the children's home, Wazi was amazed to view Rony and Fatima, ages 6 and 8, whom he had never seen. Both children had been born with parts of their limbs missing. Wazi was astonished most of all because he had been unaware of such unfortunate kids living in his own village, just a few hundred meters from his own house.

On a rough road in Bhanga village, I met an elderly man walking slowly with a cane. He introduced himself as "Shajaman, freedom fighter" and invited me to take tea with him. As we sat together, he spoke proudly of his days during the 1971 war for independence from Pakistan.

He offered hospitality to me, a foreign stranger, whose government, not so long ago, supported Bangladesh's oppressors in the War of Liberation.

During the month of "lockdowns," the church in Bangladesh celebrated the installation of Archbishop Bejoy D'Cruze amid a COVID-limited attendance. On the morning of the ceremony, I had a slight case of diarrhea, but decided to attend the ceremony anyway because of the new archbishop's cheerful personal invitation: Come to the ceremony "to represent the Muslims of Bangladesh." Gladly done.

As I walked along the Dhaka rail station platform, a woman going in the opposite direction stopped and stared, at me. "Bob Brother" she said, as if questioning her memory. Shari-fa bubbled with joy when I confirmed her guess. Twenty years previously, when Sharifa was age 10, her long black hair got caught in a machine and she was scalped. We took her to a hospital and she recovered. Now she hides the thick black scab under her sharee. Such a chance meeting with a person I had been privileged to help 20 years earlier is extremely rare for me. But wonderful! 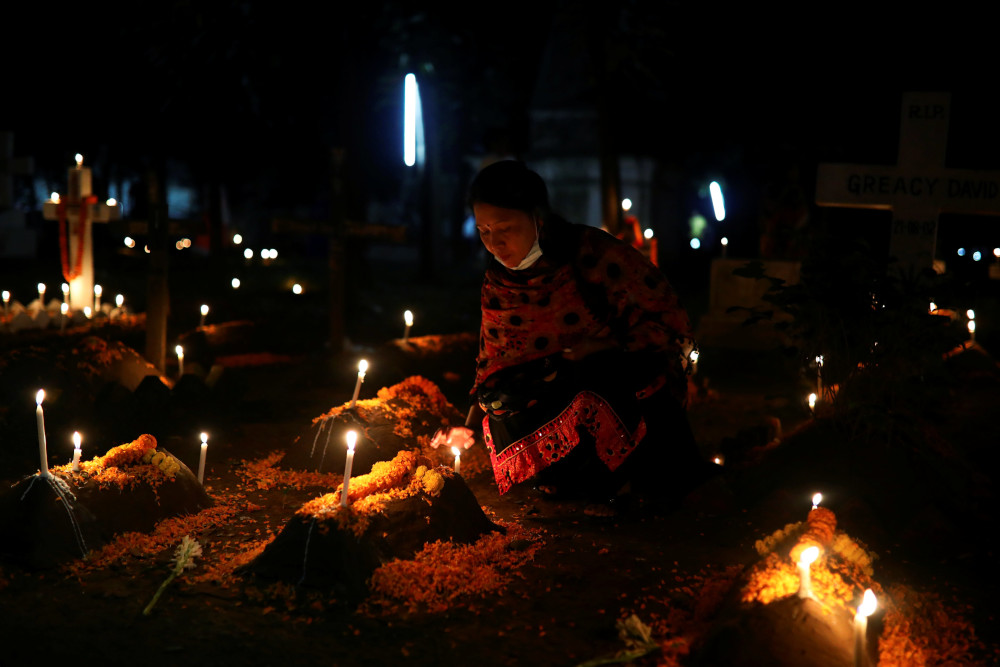 A Christian woman lights candles on her relative’s grave during the observance of All Souls’ Day Nov. 2, 2019, in Dhaka, Bangladesh. (CNS/Reuters/Mohammad Ponir Hossain)

In Chattogram, the principle city of the diocese I now serve, I went in search of bookstores having English language books. Many are the bookstores, packed full of books in Bengali, but they all offered in English only books about "self-improvement" — not so useful for a person who enjoys biography and history (to occupy hours of travel on the Meghna River). One of the self-improvement books, however, tickled my curiosity: Never Eat Alone. For I live alone and seldom eat otherwise.

A roadside storekeeper, whom I often pass on bicycle journeys, observed my irritation when the string on my face mask tore loose. Quickly, he reached into his stock and handed me one of the pretty protectors. "No need to pay," he smiled. "I do it out of love for you." That is good news.