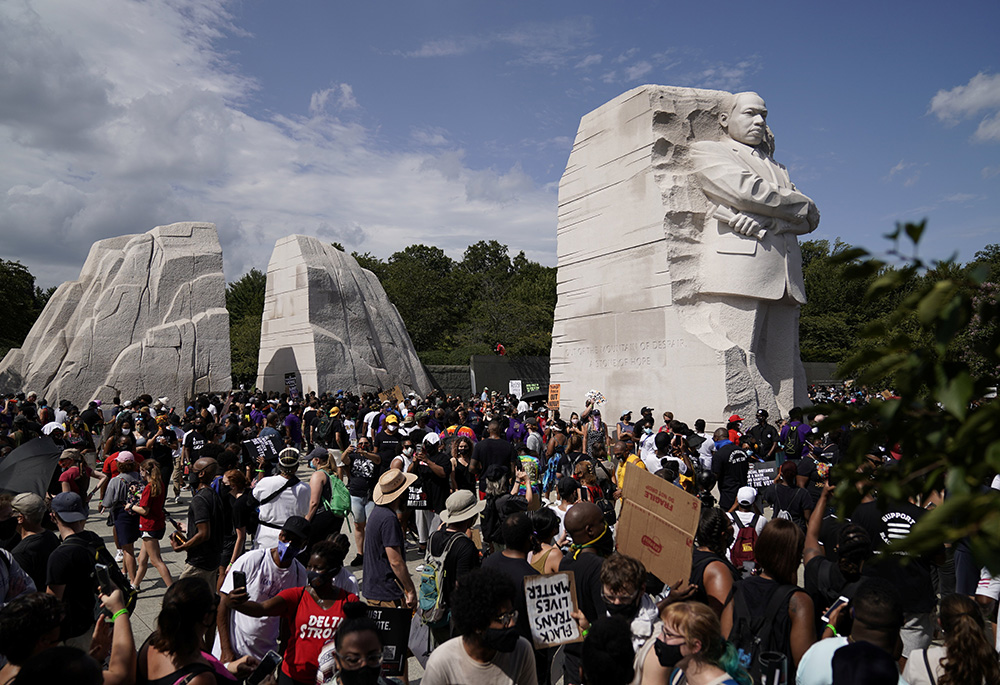 Demonstrators gather next to the Martin Luther King Jr. Memorial for the Aug. 28, 2020, "Get Your Knee Off Our Necks" March on Washington 2020 in support of racial justice. (CNS/Reuters/Erin Scott)

Three years ago, I converted to Catholicism during the Easter Vigil.

I attended Mass for the first time as a graduate student in Florida and I felt moved to conversion.

Mass was, and still is, a life-changing experience, a space where I learned how to blend the traditions of my childhood and familial faith, including a commitment to a personal relationship with Christ, with the Catholic sacraments I was encountering and receiving.

During that Vigil three years ago, I internalized that we are baptized and confirmed as part of our commitment to the body of Christ. We are called to be witnesses, in every aspect of our lives, from our families to our work to our neighborhoods.

Three years later, as we enter the third year of the pandemic amid various international humanitarian crises, and as we enter a season committed to rebirth, renewal and refocus, what does our baptismal call demand from us, especially at a moment when our nation and church feel more polarized than ever before? What does this require from an institutional church that for many of us has often been complicit in enforcing the gates of white supremacy?

Pope Francis reminded Catholics to listen to the voices of those marching in protests around the world. He added that leaders, in particular, must "listen to the voice of their citizens and welcome their just aspirations assuring complete respect for human rights and civil liberties."

Francis encouraged demonstrators around the world to organize and fight for justice "without succumbing to the temptation of aggression and violence." 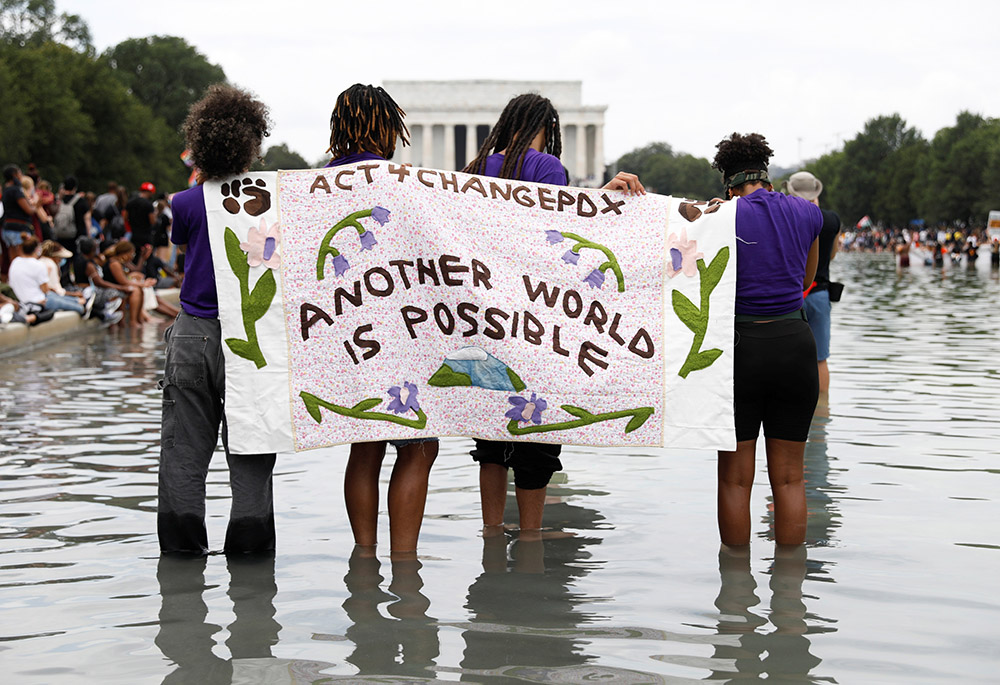 Demonstrators gather in front of the Lincoln Memorial for the Aug. 28, 2020, "Get Your Knee Off Our Necks" March on Washington 2020 in support of racial justice. (CNS/Reuters/Andrew Kelly)

To become the church that, as Francis urges, truly listens, we must continue to promote and uplift the most marginalized. Black people have been demanding that our voices be heard, from the streets to the pews. Black Catholics, Black people in America, and across the world, are exhausted, mentally, physically and spiritually, especially as bigots continue to fan the flames of racism, white supremacy, bigotry and make a mockery of democracy and the rule of law, from legislation attempting to ban critical race theory and queer studies to the repealing of laws like New York City's "walking while trans." (I'm proud to say that my day job boss, leader and part mentor, New York state Sen. Brad Hoylman, championed the repeal of "walking while trans" in the New York state Senate, which was signed into law last year.)

The embodiment of my baptismal call as a Catholic, one who is Black and bi, has been lived out in anti-racism marching.

In the summer of 2020 from June to July, anti-racism uprisings occurred across the country following the death of George Floyd. I organized in my community in New York City, and at my home parish of St. Charles, I shared my personal experience with racism and organized a prayer service, alongside my great friend, colleague and co-leader of Young Professionals. The service, which was covered by our local Catholic news channel, was a moment of true reckoning for our Brooklyn Heights church community, a predominantly white and wealthier parish.

The following month of August I decided to drive from New York City to Washington, D.C., for the annual March on Washington. I watched many people gather even in the midst of the COVID-19 pandemic, as we all felt more called to be there than ever before. With the murders of Ahmaud Arbery, Breonna Taylor and Floyd, everyone at the March of Washington was there for a true reason. The goal of the 2020 march was to bring to light the issues of our country including issues of systemic racism, and the continuation of the fight that the civil rights movement started with leaders like Dr. Martin Luther King Jr.

One of the most powerful speakers was Letetra Wideman, Jacob Blake's sister. Her speech was incredible due to the mere fact of what she said, given the recent loss of her brother. "God has been preparing me. America, your reality is not real. Catering to your delusions is no longer an option." she said, adding, "Black America, you must stand, you must fight, but not with violence and chaos." After the speeches, we marched from the Lincoln Memorial to begin the trail up to the Dr. King memorial and Black Lives Matter Plaza. As we marched throughout the city, I felt calm, and had a sense of peace as I marched with these people. 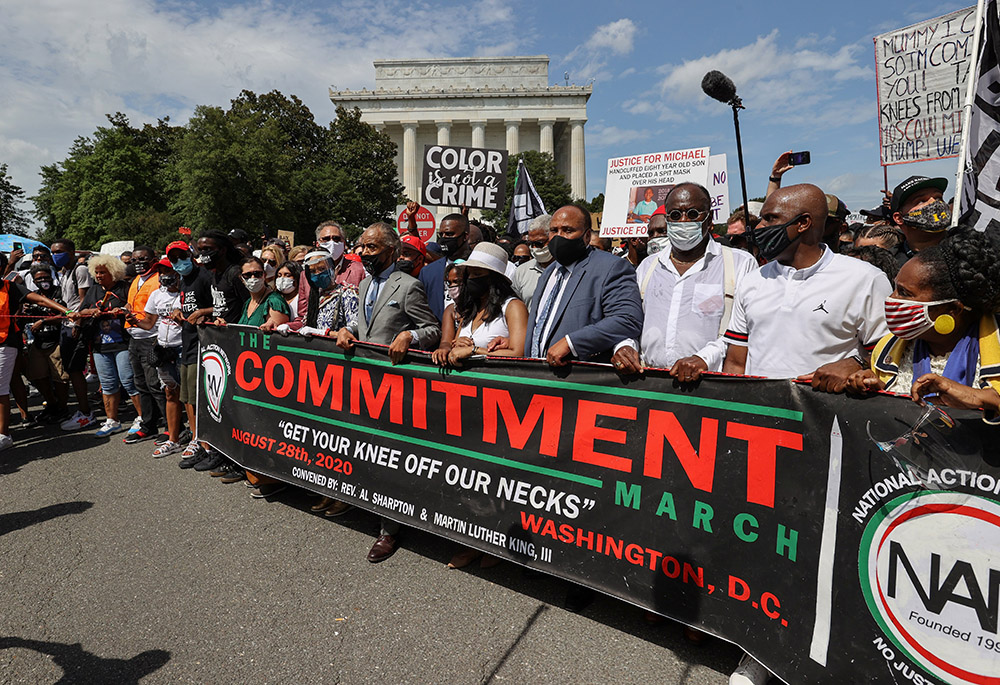 The Rev. Al Sharpton and Martin Luther King III, eldest son of slain civil rights leader Rev. Martin Luther King Jr., his wife Arndrea Waters King and other leaders begin the "Get Your Knee Off Our Necks" Commitment March on Washington 2020, following a gathering at the Lincoln Memorial Aug. 28, 2020, in Washington. (CNS/Reuters/Jonathan Ernst)

The March on Washington, and every protest I have witnessed, these spaces are models of what try allyship can be for Catholics and as a greater church in the fight for racial justice. We as Catholics are meant to come together to fight racism, bigotry, and for justice and truth. As we move into our Lenten season, we should be reminded of all the struggles that we have faced in the past year.

Our baptismal call invites us to organize and gather together as Catholics, especially as divisions continue to grow in our church and world. As Catholics, we need to continue pushing the institutional church toward becoming a church that truly goes to the margins, one that becomes the very field hospital Francis imagines us to be. This Lenten season, let us hold this call in every space in which we gather, from our parishes to our marches to our classes.

As disciples of Jesus Christ, we are called to be a light to the world and to be and also be a guiding light in trying times. When I think about what Christ did in times of turmoil, I see that he stood firm in his values and uplifted the people around him who needed his help. This is what I see when I march through city streets. This is what it means to believe Black lives matter.

The church in this Lenten Season is called to be a witness. We must embrace King's witness and, as a church, join in modern day social justice movements and become the leading light in the fight for equality for all, especially Black people.