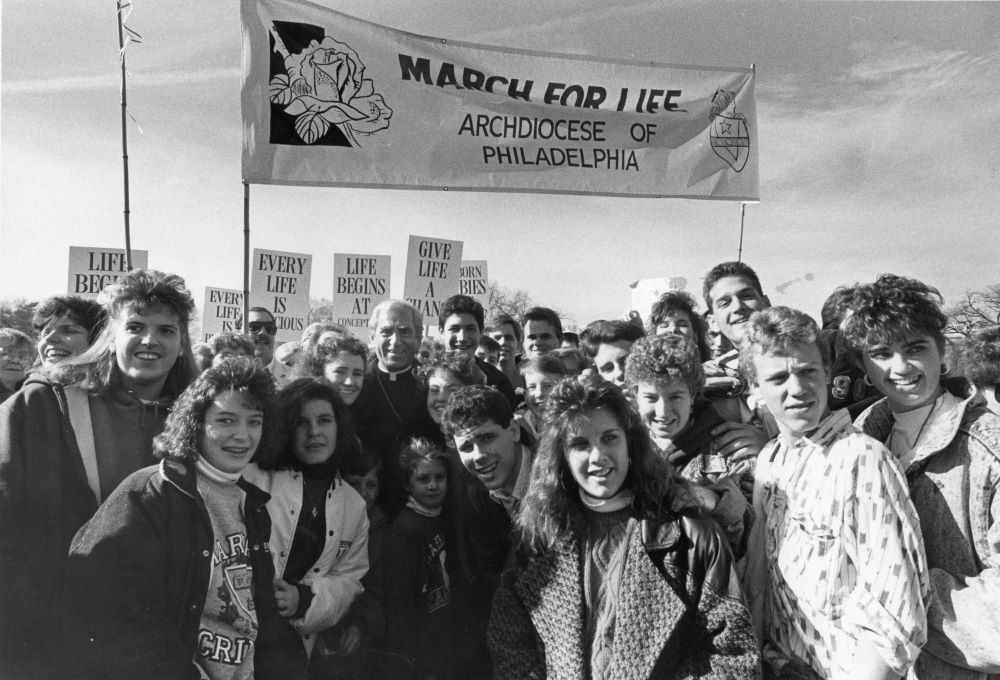 Author is pictured right of then-Philadelphia Archbishop Anthony Bevilacqua (center) at the 1989 March for Life — the first and only time she attended the anti-abortion event. The 2005 Philadelphia grand jury report found Bevilacqua had orchestrated policies that ignored victims and shielded hundreds of abusive clergy from punishment. He died in 2012. (Courtesy of Kathleen Sprows Cummings)

I attended the annual March for Life in Washington, D.C., for the first and only time in January 1989, as a senior at a Catholic high school in the Archdiocese of Philadelphia. The experience looms large in my memory, thanks to a photograph that appeared on the front page of Philadelphia's Catholic newspaper. Archbishop Anthony Bevilacqua is featured front and center, surrounded by enthusiastic teenagers. I'm on the archbishop's left; he has his arm around me, and we are both smiling brightly.

I remember basking in Bevilacqua's warmth and exuberant praise, believing him when he assured us that when it came to defending the sanctity of life, there was nothing more important that we could do than join the crusade to overturn Roe v. Wade.

I'm often tempted to send this photo to the many people who write to me, outraged that I've dared to suggest publicly that U.S. bishops' obsession with abortion has undermined both their credibility among the faithful and their relevance in America. When my critics accuse me of callous indifference to unborn children, I'd like to show them the photograph, not to prove my pro-life bona fides, but to explain how much I have changed since it was taken, in ways that have made it impossible for me to March for Life as smugly as we did that long-ago winter.

My first step away from the March came a few months after that Washington trip, when I took my first college classes in women's history and feminist philosophy. As anyone who has studied these subjects — even at a Catholic university — can tell you, once you learn how sexism and misogyny work, you cannot help but become attuned to how they shape patriarchal institutions, including those you love.

I am keenly aware that militant defenses of unborn children are often paired with a shocking disregard for and a desire to control the women who carry them. I am also deeply frustrated by how readily the church invests moral authority and political capital in making pronouncements about what may or may not be done to, by, or with women’s bodies, even as it stubbornly refuses to listen to women’s voices or fully utilize their intellectual and pastoral gifts.

It may sound counterintuitive, but becoming a mother led me even further from anti-abortion activism than my encounter with feminism had. It is true that the experience of pregnancy confirmed my belief that life begins long before birth. Never will I forget the gentle fluttering sensation that awakened me one morning early in my first pregnancy, prompting me to marvel that another human was growing inside my body.

On balance, though, my own experience of motherhood left me far more sympathetic to women who sought abortions, and far less inclined to march in protest of safe and legal access to them. I was blessed with an abundant fertility that foiled any attempt to "plan" my pregnancies. At the beginning of each one, I felt overwhelmed — and yet each time, I was well beyond my teens, employed and insured, married to and cherished by the baby's father, and warmly congratulated by extended family. I could easily imagine how terrified and desperate I would have felt if I lacked a single one of those safety nets, let alone all of them — as many women facing unplanned pregnancies do.

Pro-life activists and bishops would garner far more support if they channeled a fraction of the energy and resources they spend seeking legal restrictions on abortion into championing policies that actually reduce the demand for it, such as universal health care, generous parental leave and free early childhood education.

Ultimately, though, it was the clergy sex abuse scandal that soured me on any characterization of abortion as the pre-eminent moral issue of our time. Having read the 2005 Philadelphia grand jury report, it is impossible for me to look at the photo of me and my March for Life buddy without cringing. Anthony Bevilacqua was then at the beginning of his tenure as Philadelphia's archbishop. As his own testimony and that of many others in the grand jury report makes clear, egregious abuse took place on his watch. Bevilacqua persistently delegated for deniability, and approached the allegations with what may be charitably described as an astonishing incuriosity and perhaps more accurately labeled as willful ignorance.

It was the clergy sex abuse scandal that soured me on any characterization of abortion as the pre-eminent moral issue of our time.

The case of Nicholas Cudemo is especially sickening. Bevilacqua had twice promoted the priest to serve as pastor of Philadelphia parishes, in spite of serious allegations on his record. Had Bevilacqua been more inclined to investigate rather than conceal and protect, he might have discovered one shocking story detailed in the 2005 report. After raping an 11-year-old girl, Cudemo berated her for becoming pregnant and thus forcing him to procure an abortion for her. He claimed to be "very pro-life."

It's these and other odious cases of clerical sexual abuse and its episcopal cover-up—and they are legion — that make it hard to take U.S. bishops seriously when they claim to care about children, born or unborn.

The front-page photograph from January 1989 leaves me angered and embarrassed at Bevilacqua's complicity and my own innocence. Like many U.S. Catholics, I take heart in the teaching of Pope Francis, who reminded us that while defense of the innocent unborn is certainly important, the lives of the poor, the vulnerable, the victimized, the elderly and the abandoned are "equally sacred" and deserving of our advocacy and attention. Being militantly anti-abortion, in other words, is not the only way to be pro-life.

Related: With Roe likely to fall, March for Lifers see movement at a crossroads
A version of this story appeared in the Feb 4-17, 2022 print issue under the headline: I'm pro-life. Here's why I don't attend the March for Life..