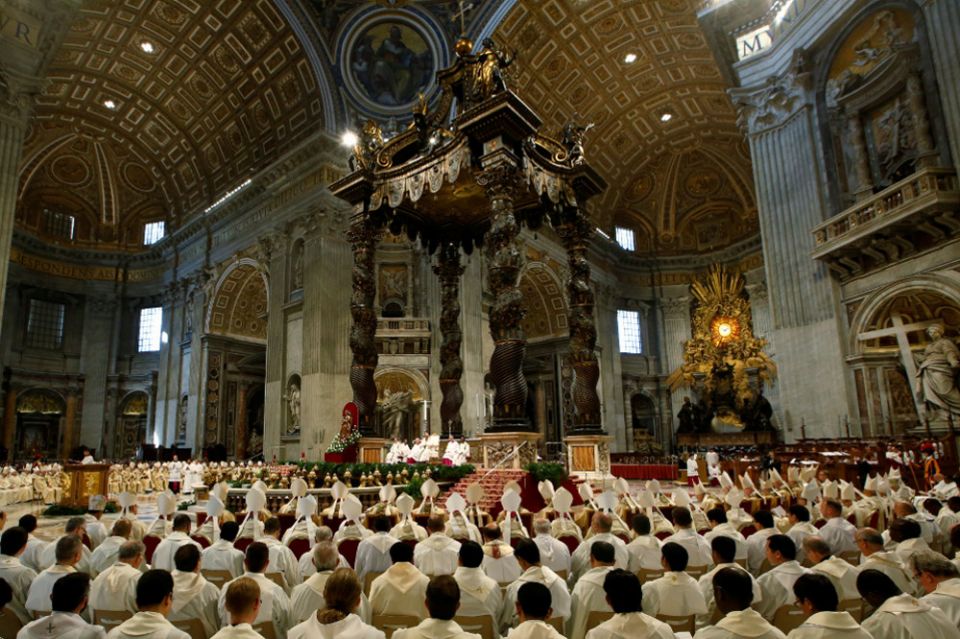 If you had the chance to attend Holy Week services in person or via television — and I hope you did — you probably noticed the more things change, the more they stay the same. It's a men's church.

The clerics — all vested — are in the sanctuary or at least up front. The rest of us are far away.

Keeping the faithful at a distance was a hallmark of medieval Catholicism, so much so that St. Francis of Assisi tried to do something about it. Unable to bring the people closer to the celebration, he gave them the Gospel. His attitude, still flowering in the world, helps faithful folks assimilate the uncomfortable truth: they cannot be near the sacred. Especially women.

Liturgy demonstrates the collision between the real and the unreal, between the truth and way the church treats women.

Oh, you say, in my parish we have girls and boys as altar servers. We have men and women as lectors and extraordinary ministers of the Eucharist.

OK. That's in your parish. But look around the country and around the world, and you will find more and more parishes installing altar rails, and fewer, if any, removing them. Diocesan cathedrals are the same.

Too many years ago, I heard a women liturgy professor call the altar rail a "fence." She has a point.

When the "fence" is not enough, usually at a major celebration like the Chrism Mass or Easter Vigil, seminarians may form a torch-bearing wall between the people and the altar during the Eucharistic prayer. I've even seen members of the military standing there — on St. Patrick's Day in Waterford, Ireland!

It is an uncomfortable feeling, especially for women, to be fenced off from the Eucharistic celebration. Yes, women — and men — can receive communion at any Mass, but the distance between the people of God and the altar is exponentially and symbolically increased when tens or hundreds of bishops, priests and deacons form a virtual armed guard, with or without torches.

That's just how it is, you say. Yes, that's just how it is. But think about what it looks like. Imagine a photo of the Easter Vigil Mass in St. Peter's Basilica, or even in your own diocesan cathedral. See any women? Oh yes, over there is the woman who read the Epistle. And, didn't a woman help bring up the gifts? But who else, where else? Where are the women?

They're in the back. And, chances are, many of the ones there last year went over to the Episcopal church this year. That is not a threat. It is a fact. Women are walking, some even running, away from the testosterone-fueled liturgical symbolism of Catholicism, and so much more. By now it is a trope to blame it all on the sex crisis. It is that, but it is not only that. Women, with their husbands, children, other relatives and friends are gone. Their explanations are the same, no matter in what language: they are sick and tired of being, both symbolically and really, second-class citizens of the church they once loved. Their heartbreaking pain is deep, and it is real. They cannot, they will not, allow themselves to be treated so.

My parish is different, you say? Good. Let its light shine downtown. Let it leap over the torchbearers and across the clerical divide to the bishop.

My parish is different, you say? Good. Let its light shine downtown. Let it leap over the torchbearers and across the clerical divide to the bishop. Tell him what it all looks like. Tell him how the picture does not match the story.

Remind him, if you will, that it was a woman who first proclaimed the resurrection.

[Phyllis Zagano is senior research associate-in-residence at Hofstra University in Hempstead, New York. She will speak Friday, Sept. 13, 2019, at the Bishop Keane Institute of Immaculate Conception Church, Hampton, Virginia. Her books include Women Deacons: Past, Present, Future (recently published in France and Canada as Des femmes diacres and in Portugal as Mulheres diáconos: Passado, presente, futuro. Study Guides are available for free download at https://people.hofstra.edu/Phyllis_Zagano/.]

Column | Look up at the altar, where are the women?

Your thoughts on the real presence

Cardinal Burke: Synod should take Communion proposal 'off the table'