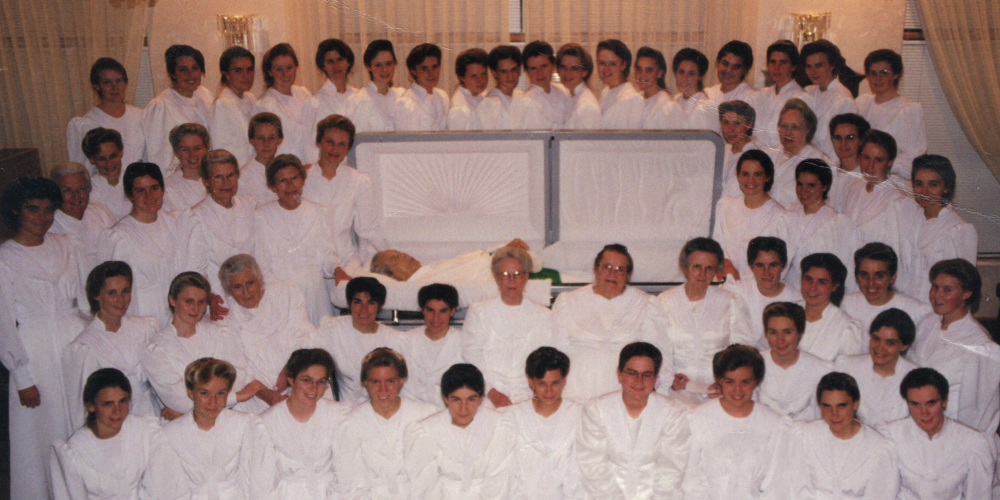 The wives of Rulon Jeffs attend his funeral in this photo featured in the documentary "Keep Sweet: Pray and Obey" on Netflix. He had the words "Keep sweet" affixed to the soles of his shoes. The phrase meant women were to practice absolute submissive obedience to their husband as a prerequisite to salvation. (Courtesy of Netflix © 2022)

On the outskirts of Salt Lake City, Utah, a mainstream Mormon stronghold, a man named Warren Jeffs managed to convince a Fundamentalist Latter-day Saints congregation 10,000 strong that he was their one true prophet and that they should do anything he asked. That was up to and including looking the other way when he started setting up marriages with underage girls, signing away their parental rights at the school he ran, and sending him thousands of dollars a month while he fled law enforcement pursuing him on charges of child sexual abuse crimes.

The four-part Netflix documentary "Keep Sweet: Pray and Obey" is ultimately about control. The series tells the story of cult leader Warren Jeffs — who is currently serving a life sentence plus 20 years in prison — and the institutionalized sexual violence that characterized his reign as God's self-proclaimed prophet of the Fundamentalist Church of Jesus Christ of Latter-day Saints.

The documentary follows several major characters, primarily women who were "plural-married" to Warren, with a gripping narrative that emotionally involves the viewer through creative visual storytelling and a mixture of archival footage and photography. The FLDS did not skimp on documenting their religious convictions and practices.

The story begins at the end of Rulon Jeffs' reign. The father of Warren, Rulon led the FLDS from 1986 until his death in 2002 at age 92. Rulon is presented as the congregation's elderly, fatherly figure. The way his story unfolds is slowly unsettling as several of his wives talk about what it was like to be a young woman who caught the eye of the geriatric leader. Rulon would call them to his table at a gathering, a sign he intended to marry them. Once they were "plural-married," all 20 of his wives lined up outside his bedroom every evening as he selected who would spend the night with him. The women did not describe the experience as special, sacred or holy — despite the fact that they had been taught that marriage would be all those things. 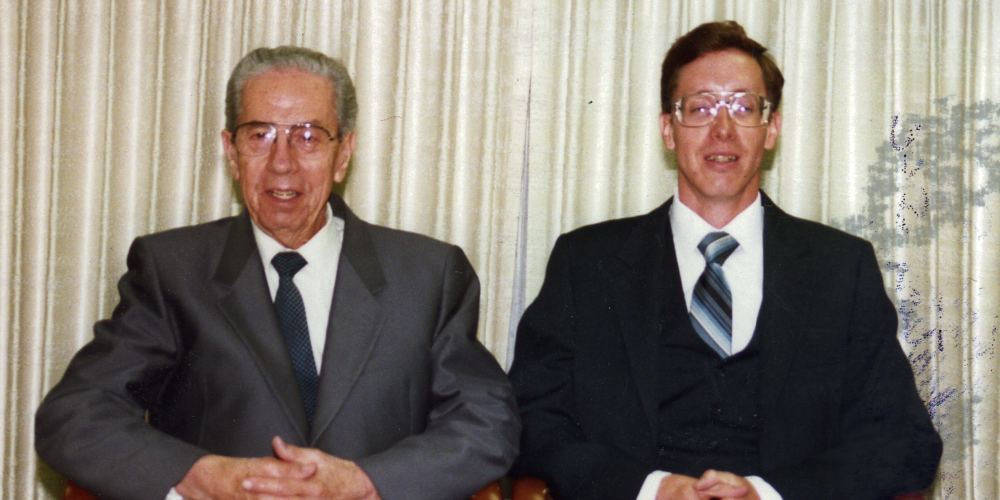 This photo of Rulon Jeffs and his son, Warren, is used in the Netflix documentary "Keep Sweet: Pray and Obey." Rulon died in 2002 at age 92. Warren is serving a life sentence plus 20 years for convictions on child sexual abuse charges. (Courtesy of Netflix © 2022)

To most in the congregation, Rulon seems like a pretty typical Christian preacher — aside from the polygamy — with a few strange "quirks." For example, he was so fond of the titular phrase for the documentary, "keep sweet," that he had the words affixed to the soles of his shoes. "Keep sweet" meant practice absolute submissive obedience to your husband as a prerequisite to salvation.

Rulon had 67 sons, but only Warren was shrewd enough to position himself so that he had access and control to his father when Rulon's health began to deteriorate. It was Warren who led the prayers for Rulon, and he ultimately replaced his father at the pulpit. This control paved the way for him to become the next prophet, and once Rulon died, Warren cemented this spiritual coronation by marrying all his father's wives. This unsettled many in the congregation, describing it in the documentary as "marrying his own mothers." What kind of man was this new leader?

Warren was not like his father and he wanted the congregation to know it. He was younger, craftier and keen to enjoy the fruit of the empire that his father built while adding to the kingdom. His sermons began to include dark themes and talks of Armageddon, as he incorporated a fire and brimstone tonality that he would ultimately use to stoke people's fears and keep a tight grip on members' emotions. One former member who was interviewed said, "I wasn't scared of death, I was scared of disobeying the prophet."

As head principal, Warren controlled the school; he not only controlled what the children were taught, but he forced parents to sign waivers giving their parental rights to the school. Warren kicked out as many young men from the church as he could to consolidate the remaining women as wives for men he deemed holy: men that he could control. He claimed their businesses for the church and used them for free labor to underbid any mainstream competitors. Then he built a compound on a ranch in Texas where he further isolated the women, children and other vulnerable members. Meanwhile, Warren's wives got younger. 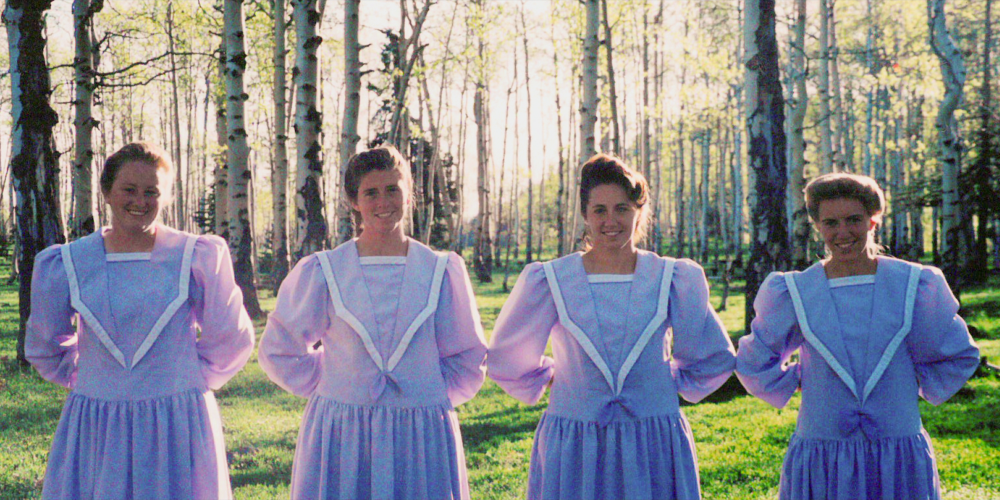 Fundamentalist Church of Jesus Christ of Latter-day Saints women are pictured in the documentary called "Keep Sweet: Pray and Obey" on Netflix. Women and girls were taught that their purpose was strictly to be perfectly obedient to FLDS men and raise FLDS children. (Courtesy of Netflix © 2022)

Even though polygamy is illegal, the Utah government is less willing to prosecute it than crimes against children. When one of Warren's underage brides managed to escape and tell her story, law enforcement put Warren on the FBI's most wanted list and Warren went on the run. Meanwhile, his sermons continued to pour out to all the faithful and alert them that "the church" was in serious need of cash. He took his favorite wives and lived a hedonistic "Gentile" lifestyle in Las Vegas, at Disney World, casinos and hotels, indulging in all of the vices of the earthly world that he had consistently preached against. To fund all this, the congregation scraped together any money they could find, and collectively sent him more than $300,000 a week.

From the outside, Warren Jeffs' actions seem monstrous and evil. It is clear that he used a position of power and authority to manipulate and control a large group of people for his own ends. But for the members of the FLDS, it was not that simple. Many of the congregation had been born into the religion. Everyone they knew were FLDS. The only path they knew to salvation, and heaven, was through adherence to the theology espoused by the FLDS. This type of emotional and spiritual manipulation is not unique to this particular Christian sect — these tactics have been used throughout history by those who wish to control others for their own gain.

Warren was an opportunist. He took advantage of his position and of the women and children in his flock. He may be in prison, but the traumatic impact of his actions and teachings upon a generation of FLDS adults and children is immense and, for many, ongoing. Women and girls were taught that their purpose was strictly to be perfectly obedient to FLDS men and raise FLDS children. There was no path for a single, unmarried woman. There was no freedom to choose your own spouse, much less to be your own person.

The spirituality of the FLDS was clouded by a spirit of extreme scrupulosity and a rampant purity culture. The girls were given no sexual education and were subsequently subjected to sexual violence of varying degrees by men who believed that power was owed to them by divine right. Even Rulon Jeffs' favorite saying, "Keep Sweet" is coercive within a highly controlled environment such as the FLDS. There is a hidden threat within those seemingly innocuous words when they are spoken by the most important man in the church.

The documentary ends by showing some of Warren's former wives talking about their lives now outside the FLDS. While being painfully aware of those they left behind, they are free to pursue their own interests and friendships. They talk about being able to enjoy things for the first time like secular music, and more significantly, the freedom to marry whomever they choose.