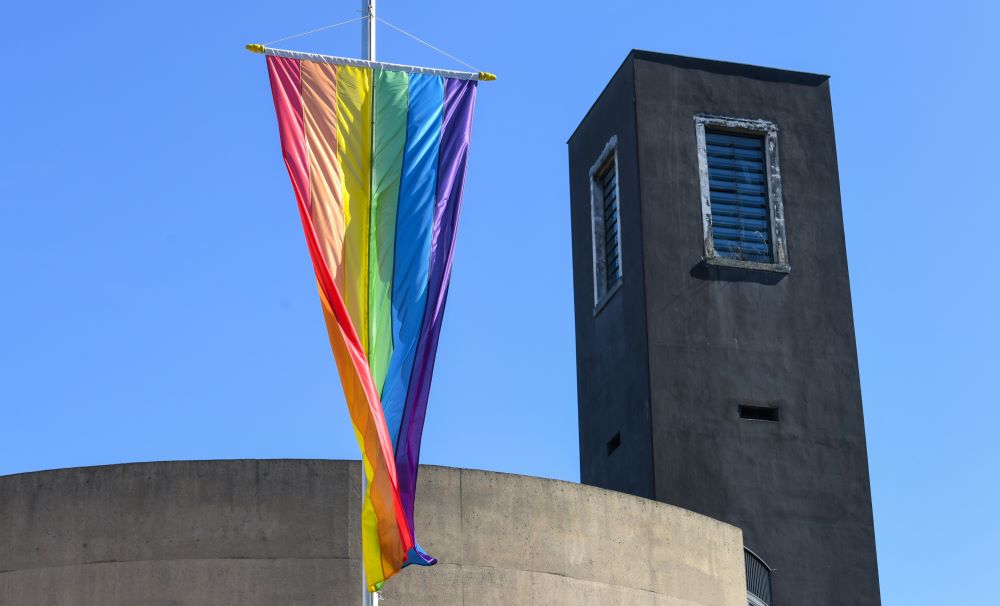 A gay pride flag hangs outside the Church of St. Theodore in Cologne, Germany, in March. Archbishop Heiner Koch of Berlin said he would appoint a pastoral minister for gays, the archdiocese announced in August. (CNS photo/KNA/Harald Oppitz)

Editor's Note: This statement has been issued to NCR by the LGBT Outreach Commission of the Diocese of Lexington, Kentucky, which is part of that diocese's Office of Peace and Justice.

Pope Francis declares that the Catholic Church's pro-life stance could not be more important today, especially in light of the COVID-19 pandemic.

"The life we are called to promote and defend is not an abstract concept, but always manifests itself in a person in flesh and blood: a newly conceived child, a poor marginalized person, a sick person alone and discouraged or in a terminal state, one who has lost his job or is unable to find it, a rejected or ghettoized migrant," the pope said in March 2020.

Catholics hold that human life is sacred and that the dignity of the human person is the foundation of a moral vision for society. Every October in the United States, the church celebrates this value through a monthlong Respect Life observance with the first Sunday of October being Respect Life Sunday. The question remains: Do Catholics value all life or just some life?

Francis has famously embraced LGBT Catholics and provided hope to those who thought the church was becoming more open and inclusive of all Catholics who seek a faith community and spiritual home. This was good news for church membership, as numbers of church-going Catholics have dwindled faster than Protestant churches, from 76% belonging to a parish in 2020 to 58% in 2021. Gay people of faith are used to the dismissive, fire-and-brimstone comments of some believers about "going to hell" and nonbelievers who disparage religion outright. Francis' open-arms approach mirroring Jesus' inclusivity of all believers felt like a breath of fresh air.

Historic St. Paul Catholic Church in downtown Lexington, Kentucky, has established an LGBT Ministry, an outreach to gay Catholics, recognizing that it is critical to honor diversity and work to protect, defend and celebrate every person — especially those marginalized by society or the church. This may not be popular work among all Catholics, but it is following the work of Jesus, who encouraged us to love one another as he loves and to embrace those rejected by others. The recently appointed Catholic Diocese of Lexington LGBT Outreach Commission has been missioned to lead the diocese-wide effort of seeking, welcoming, accompanying and ministering to the LGBT community in the Diocese of Lexington.

It seems that the dignity of the human person is at stake. Ministry to LGBT persons is consistent with the Gospel, with Catholic values and with the Catechism of the Catholic Church which says that "[gay people] are to be treated with respect, compassion and sensitivity." The Catechism also says "every sign of unjust discrimination must be avoided" in their regard. When did following Jesus' teaching become a sin and blasphemy?

The work of this ministry is also one with public health importance. Marginalization and discrimination, especially among LGBT youth, may be very dangerous. According to the Trevor Project, youth who have been rejected by their families are 8.4 times more likely to attempt suicide than those youth who have not been rejected by their families. We also know that a practice of faith and those spiritual communities that share common values — not just a sense of belongingness — are also protective.

Science has told us that religious practice contributes to a sense of well-being, but we also know that a faith practice protects against suicide attempts and possibly protects against suicide. If the pandemic has taught us anything it is that physical and emotional isolation, being detached from those things that provide meaning and purpose, are, perhaps, just as deadly. "Deaths of despair" have become rampant in our region of the country, where social ills, such as the devastating consequences of isolation, frequently connected also to drugs and alcohol, have contributed to an increase in overdose deaths.

What is the antidote to these social ills? What does the Church offer that may help combat these ills? What gives more of a sense of belonging, meaning and purpose to one's life than a practice of faith? We know of nothing else more important than a practice of faith. All life is sacred, and all life deserves to be welcomed, defended, celebrated and affirmed in their own community of believers with open arms.

A version of this story appeared in the Oct 15-28, 2021 print issue under the headline: LGBT lives should be valued this Respect Life Month, too.