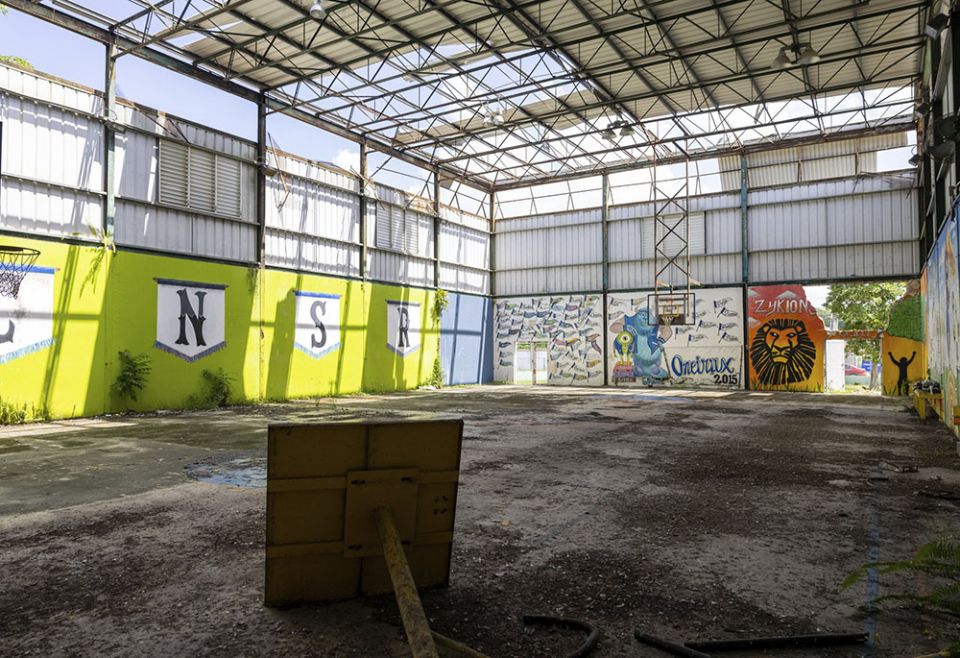 The gymnasium at Our Lady of the Rosary School in Vega Baja, Puerto Rico, is seen in this undated photo. (CNS/Courtesy of Catholic Extension)

Politico finally caught up with NCR, publishing an article about how the rebuilding of the energy grid in Puerto Rico could serve as a model for the rest of the country. I published an article about the need to rebuild a decentralized, sustainable energy grid back in 2017! The island has ample wind and solar resources, so it is criminal to think the island will remain dependent on imported diesel, electric cables that must cut across the island's mountainous terrain, and pay 50% more than you and I do per kilowatt hour.

The death of Archbishop Desmond Tutu fills the world with a sense of loss and sadness. He carried on the legacy of other civil rights leaders like Gandhi and Martin Luther King Jr., and revolutionized the society in which he became a moral force, all by renouncing the use of all but moral force and embracing nonviolence. In God's providence, men and women are raised up to point the way for the rest of us, and Tutu was one such person. The obituary at The New York Times captured the scope of this great man's influence.

From the Brookings Institution, Elaine Kamarck argues that President Joe Biden will have a better shot at resuscitating his Build Back Better proposals if he gets the U.S. Senate to consider them piecemeal. At the very least, that approach would have the benefit of focusing attention on the programs, which are widely popular, rather than on the overall price. Still, no approach will work unless Biden spends a lot of time with Sen. Joe Manchin.

In The Washington Post, Michelle Boorstein tracks the rising number of clergy who are retiring or changing careers due to the stress of the pandemic and political polarization. What is so sad about the article is that no one voices a particularly theological reason for their decision, and ministry is described as a service-oriented job, no more, no less. Our Catholic theology of orders does not guarantee freedom from the kinds of stresses the article mentions, but at least it has theological content.

At the conservative website OnePeterFive, a report on Bishop James Conley of Lincoln, Nebraska, leading a traditional Latin Mass at dawn at the University of Nebraska chapel. I hope he preached on the validity of the Second Vatican Council and the need for all these adherents of the pre-Vatican II Mass to accept the teachings of that council.

All of us have our favorite Christmas hymns. The recent documentary about "Silent Night: A Song for the World" made the case for its being considered the greatest Christmas carol of all time and I would agree if only it were more singable! No, the hymn that to my mind is the greatest carol of all time, sung throughout the world, is "Adeste, Fidelis" or "O Come, All Ye Faithful." Here it is performed as part of the Christmas Eve procession and blessing of the crib at Westminster Abbey.

A blessed Christmas to one and all — and remember, it starts on Dec. 25, so you get to celebrate it for 18 more days!

The trauma of losing trees: a memorial