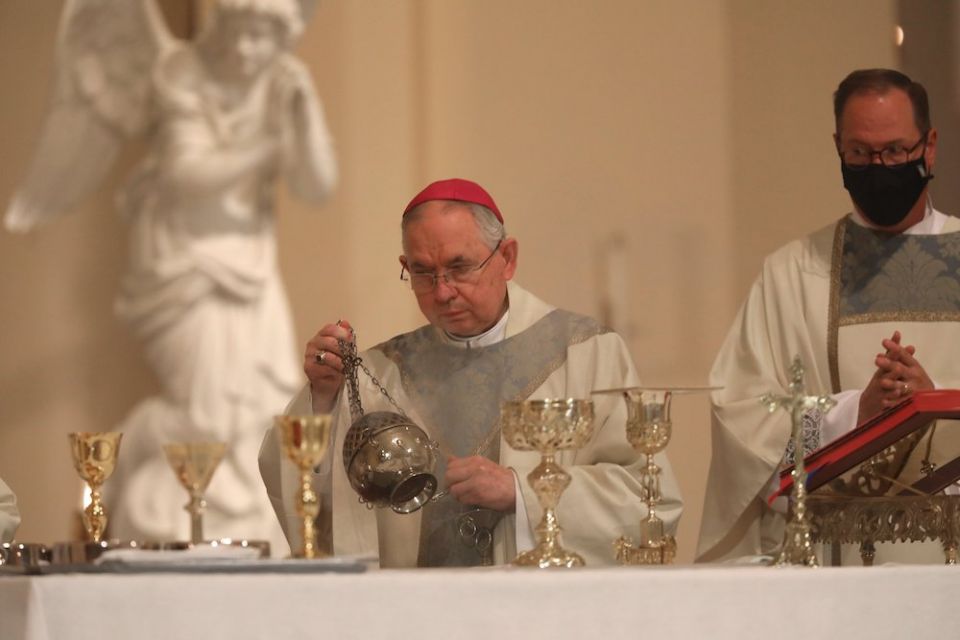 Archbishop José Gomez of Los Angeles swings a censer as he concelebrates Mass at the Basilica of the National Shrine of the Assumption of the Blessed Virgin Mary Nov. 15, 2021, in Baltimore during the bishops' fall general assembly. (CNS/Bob Roller)

In advance of tomorrow's oral arguments in the Dobbs case, Ruth Marcus at The Washington Post looks at the ways the current six-member conservative majority on the Supreme Court is poised to radically reshape the law. She is mostly right, especially when she notes: "Now, Chief Justice John G. Roberts Jr., who occupies what passes for this court's center, holds the reins but is no longer firmly in control of his horses." It will be interesting to see if any of the Trump-appointed justices will share Roberts' concern for institutional stability over the ideological concerns that have shaped them since law school.

At The New York Times, Tish Harrison Warren argues that the feminist movement needs pro-life people, tracking some of the history that did not always equate feminism with the denial of the rights of the unborn. Pro-life feminists may be the most important voices in this debate precisely because they invite everyone to rethink the framing they place around the issue.

Some threats to democracy are less violent than others but they can be just as damaging. In this article, also in The New York Times, redistricting efforts are explored. We read:

In Texas, North Carolina, Ohio and Georgia, Republican state lawmakers have either created supermajorities capable of overriding a governor's veto or whittled down competitive districts so significantly that Republicans' advantage is virtually impenetrable — leaving voters in narrowly divided states powerless to change the leadership of their legislatures.

When politicians pick the voters, voters become impotent, which feeds the notion that government is not working for the people, which reinforces the GOP brand and undermines democracy at the same time. All perfectly legal and democratic, but really frightening.

Sometimes when a politician, usually a conservative politician, picks the wrong cause, or does so in a way that is bizarre, they meet with a backlash of common sense. Even in Texas. According to Yahoo, former Austin council member Ellen Troxclair, who is running for the state legislature, complained about book called "Santa's Husband," in which Santa is Black and gay. She asked why liberals always "sexualize" children's content. But, fans of the book asked the exact, right question: If the book was about Santa's wife, would Troxclair complain it was "sexualized"?

Politico reports on a number of Trump-endorsed Senate candidates who have either quit the race or are treading water. The former president's lack of coattails was evident in the twin special elections to the Georgia Senate. That lack is even more evident now. Which raises the question: Why are Republicans still so terrified of Trump that they regularly do his bidding even when that means betraying core small-d democratic values, or embracing nutty conspiracy theories?

In the National Catholic Register, Lauretta Brown interviews some U.S. bishops who complimented Los Angeles Archbishop José Gomez for his address to the bishops and for his speech criticizing social movements the week before. Bishop Thomas Daly of Spokane, Washington, Bishop Thomas Paprocki of Springfield, Illinois, Archbishop Joseph Naumann of Kansas City, Kansas, and San Francisco Archbishop Salvatore Cordileone all offered the Register fulsome encomiums to Gomez for his talks. Gomez is not asking my advice, but I have to say: When a foursome like that is praising you, it is time to rethink your entire life.

When The Washington Post's Alexandra Petri is good, she is really, really good. In this essay she frets about the dangers posed by books in a splendid send-up of those on both ends of the ideological spectrum who wish to ban certain books from classrooms.

Advent has not only given us some of the most beautiful hymnody, but the hymns also correspond to the very different spiritual impulses of Advent. This past Sunday, we were invited by the Gospel to contemplate the second coming, a quintessential Advent theme and no hymn helps us focus on that theme better than "Lo, He Comes with Clouds Descending" sung here by the Lincoln Cathedral Choir. The lyrics of the second stanza are especially splendid:

Ev'ry eye shall now behold him,
robed in dreadful majesty;
those who set at naught and sold him,
pierced, and nailed him to the tree,
deeply wailing, deeply wailing,
shall the true Messiah see.

This Advent, remember the second coming

The quick and wondrous radicalization of Lucetta Scaraffia

Third Sunday of Advent: The world God hopes for