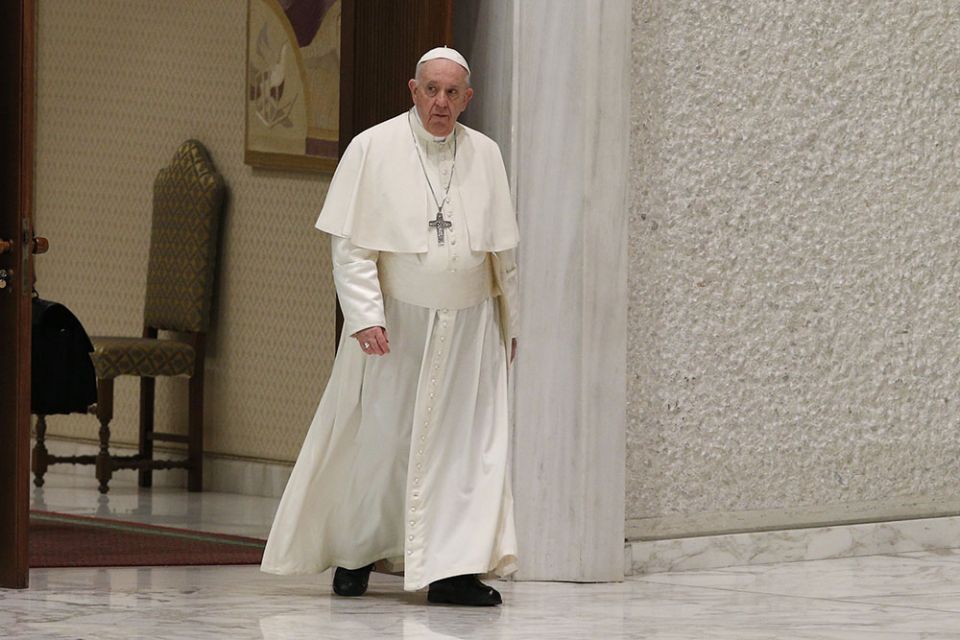 Pope Francis arrives to lead his general audience in the Paul VI hall at the Vatican March 23. (CNS/Paul Haring)

At last week's general audience in Rome, Pope Francis gave a really stunning catechesis on old age. It is not long and it is well worth reading.

At Comment magazine, technology executive Louis Kim reflects on the economy of gifts, and how the contrast with the market economy is more complicated than one might think at first sight. Kim probes some of the psychological temptations inherent in the good life, and usefully argues against any kind of facile dualism, but I still think his description of the modern economy is off: There really is nothing socially redeeming about the highly financialized iteration of the market economy that we have today. Still, two cheers for anyone willing to take on sloganeering wherever it is found and display some appreciation for the complexity of culture.

Well, sometimes we all can use a good laugh. At the Acton Institute Powerblog (Who talks like that?), Acton Chief Operating Officer Stephen Barrows reviews Anthony Annett's book Cathonomics. It would be wrong to say Barrows engages the book and its arguments. He only offers assertions that it is "tendentious" and that Annett "created too many strawmen" without really offering examples. It is all tell and no show.

In Politico, Sen. Amy Klobuchar has rightly asked that Associate Justice of the Supreme Court Clarence Thomas recuse himself from any and all election cases after it was learned his wife, Ginni, had corresponded with Trump White House Chief of Staff Mark Meadows about ways of overturning the election. Klobuchar is right — and here is a drumbeat to which the Dems should harken. Calls to impeach the justice are puerile. Calls for recusal are appropriate.

In The New York Times, columnist Kurt Streeter traveled to Spokane, Washington, for the second-round games in the women's NCAA March Madness. What did he find? The enthusiasm, and the marketing potential, surrounding women's basketball matches that of the men's game. Those of us lucky enough to live 20 minutes from the University of Connecticut, whose Lady Huskies dominated the sport for years, catapulting it into greater prominence, have known the women's game was every bit as compelling as the men's. It is nice to see the rest of the world is discovering it also.

Many have asked about the ecclesial conference held in Chicago last weekend. It is difficult to describe because the conference was held under Chatham House Rule, meaning attendees agreed they could speak afterward about the contents of the discussions but not reveal who had made any particular comment. (Coverage by NCR's news editor can be found here.) But here are two items that give some perspective on the event. First, at Boston College's student newspaper The Torch, an interview with Jesuit Fr. Mark Massa, director of the Boisi Center for Religion and American Public Life, which was one of the sponsors of the event, discusses its genesis. My only criticism of the article is that he fails to note the name of the restaurant in Sturbridge, the Publick House, and the fact that it has the most delicious pecan rolls.

Second, at the last minute, the entire schedule had to be rearranged because the Holy Father had asked the bishops of the world to join him in consecrating the world, and especially Ukraine and Russia, to the Immaculate Heart of Mary. So, the Mass originally scheduled to open the conference at 8 a.m. was transferred to a noon Mass at Chicago's beautiful Holy Name Cathedral. The apostolic nuncio, Archbishop Christophe Pierre, led us all in the prayer of consecration and Cardinal Blase Cupich gave a wonderful homily. I am proud to take credit for one thing about this conference and you can see it in the video. In planning the liturgy, and selecting the hymns, I noted that on the Solemnity of the Annunciation, we usually sing Marian hymns, but that there are two protagonists in the Gospel reading for the day, the other being the Holy Spirit. Consequently, the Mass began with the beautiful hymn "Come Down, O Love Divine." Here is the video.