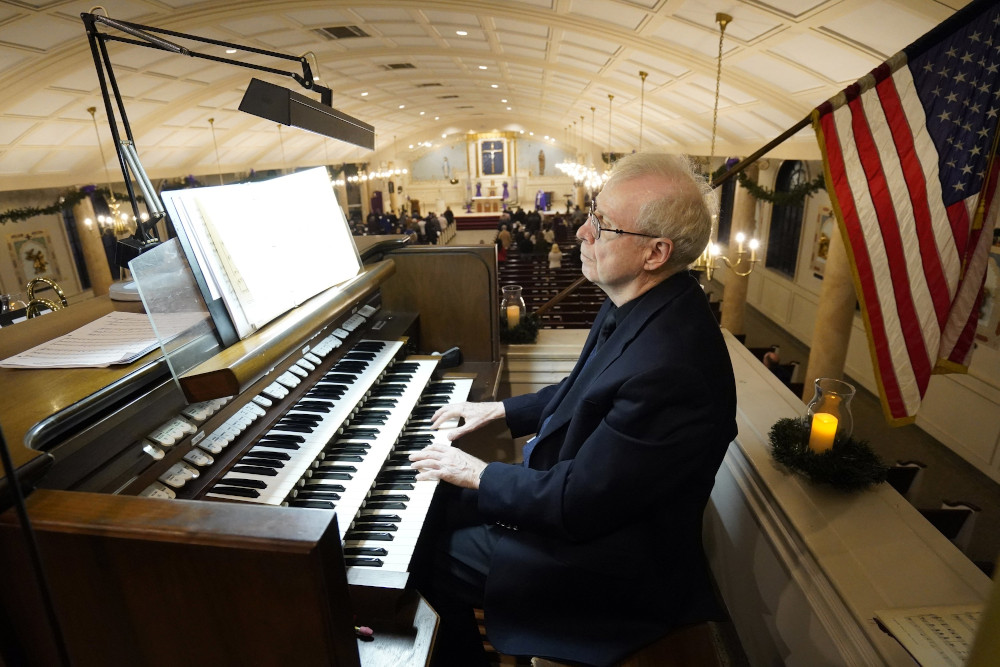 James Kendall plays the organ during an "Advent Lessons and Carols" service on the first Sunday of Advent Nov. 28 at Our Lady of Perpetual Help Church in Lindenhurst, New York. (CNS/Gregory A. Shemitz)

At ProPublica, a look at how real estate and oil tycoons avoid paying taxes. This is such a scandal and is the kind of thing that makes proposals for a wealth tax seem all the more just. If, as a side benefit, Donald Trump were to land in jail for tax evasion, well, if it was good enough for Al Capone who never threatened democracy, it is good enough for the Marquis of Mar-a-Lago.

Politico looks at a new survey of Hispanic voters that indicates the term "Latinx" is preferred by only 2% of Hispanics, compared to 68% who prefer "Hispanic" and 21% who self-identify as "Latino." What is more, 40% of those surveyed said the word Latinx either "bothered" or "offended" them. The continued use of this neologism by some on the left is the kind of thing that causes Democrats to lose elections.

It is not every day that you wake up to a front-page story in The Washington Post — or any other newspaper — about Pope John Paul I, the smiling pope who died just 33 days after being elected in 1978. Rome bureau chief Chico Harlan and Rome bureau reporter Stefano Pitrelli do a fine job exploring the many mysteries that still shroud this comet of a pope who is now on the path to sainthood.

In The New York Times, Michael Bindas of the Institute for Justice and Walter Womack of the Southern Christian Leadership Conference explain why they hope the U.S. Supreme Court will overturn Maine's ban on parents using school vouchers to go to a school that offers religious instruction. The circumstances in Maine are found in other rural states: Many school districts do not have a high school, and will pay tuition at a school of the parents' choice. The issue also affects urban education also. The authors note that the public school system assigns students to schools "by ZIP code (read: by wealth)" and write:

But the fact is that students whose families are not rich enough to move to another school district or to pay tuition at a private school are trapped in their assigned public school — no matter how bad, no matter how segregated.

When the local public school is failing, poor and working-class parents should not be forced to consign their children to a second-class education.

Coin Week magazine has an article about Connecticut's quarter, from the set of 50 state quarters executed by the National Mint in 1999. The Connecticut quarter featured an image of the Charter Oak in which colonists hid their expansive charter when Sir Edmund Andros demanded they surrender it — and submit to his authority. The quarter was designed by Andy Jones, a gifted artist in my hometown. I played the organ at his wedding. The author of this account in Coin Week gets part of the history wrong: Andros was the royal governor of the Dominion of New England, not New York, when he demanded Connecticut surrender its charter, although he had earlier been governor of New York. In any event, and admitting my bias, I thought the Connecticut quarter was the nicest of the 50.

The New York Times' "Take Five Minutes" feature finally turned itself to the King of Instruments, the pipe organ. The selections of music are interesting, with few choices of religiously inflected music, although with Bach, all his music is so heavenly it doesn't matter. And scroll to the end to hear Olivier Latry recording Bach's Little Fugue in G minor on the organ at Notre Dame in Paris shortly before the fire that nearly destroyed the cathedral.

As Advent invites us to prepare spiritually for Christmas, this week we continue to cultivate the sense of longing and anticipation for a savior that was felt by the ancient Israelites. Conveyed in both the lyrics and the music, these themes run through today's musical selection, "Come Thou Long Expected Jesus" sung here to the tune "Stuttgart" by the choir and congregation at Trintiy Episcopal Church in Tulsa, Oklahoma.