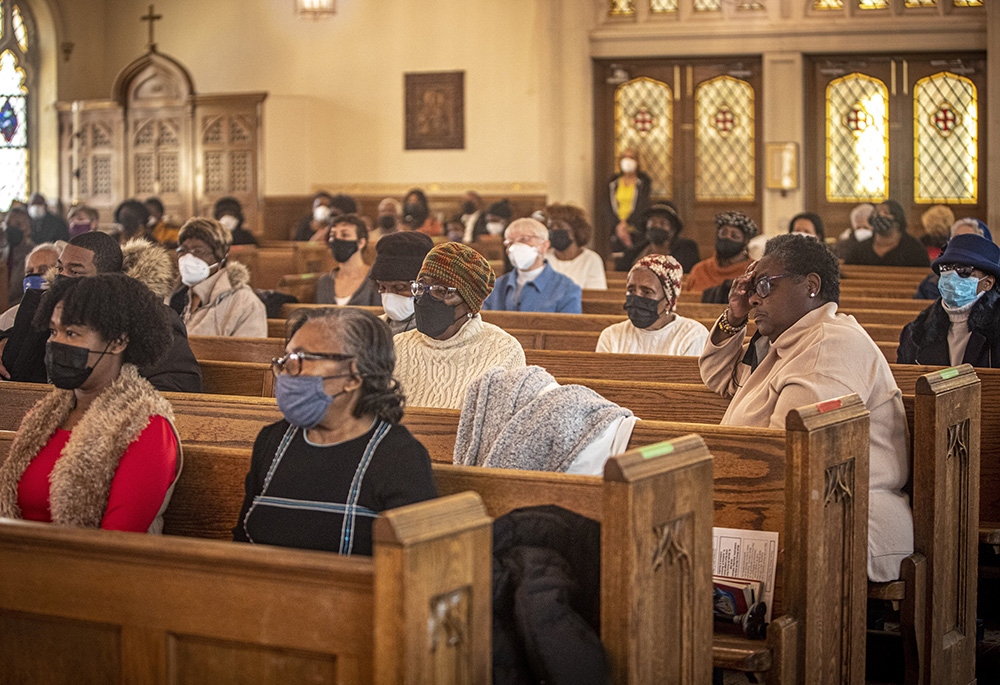 Both of these points reveal a richness to Black Catholicism that is often overlooked in most discussions of faith in America. It seems most debates on religion in the United States are about white evangelicals, the rise of Hispanic Protestants and Catholics, or a monolithic Catholic Church. Little attention is paid to the existence or influence of Black Catholics.

The number of Black Catholics is but a reflection of the influence of Black Catholics in our society. For 20 years I have been a member of a Black Catholic men's breakfast group. Our gathering has no official name, no annual budget and no public presence. Yet each of us have been active in feeding the homeless, mentoring children, educating the young, enhancing the black community, working with the incarcerated and other callings. This is not unique, for in my travels and interactions I have met many other Black Catholics who quietly live their faith in acts of justice and mercy.

Catholic social teaching, with its emphasis on the common good, justice for the marginalized, the dignity of the human person and the right of every person to grow to their fullest potential, is fully aligned with Black Christian faith.

As evidenced by the Rev. James Lawson, Fannie Lou Hamer, the Rev. Martin Luther King Jr. and others, Black Christianity in America has not been compromised with what has hampered much of American Christianity, that is, compromises with white supremacy and American exceptionalism. Slavery, segregation, the violent overthrow of Reconstruction, lynchings, white mob burnings and massacres, discrimination, mass incarceration and other traumas have given Black Christians the ability to see our nation clearly and not mistake it for the reign of God.

Black faith, therefore, looks to God, Jesus, the Scriptures, the cross and the resurrection as the source of salvation and healing, and not to race or nation. Consequently, Black Catholics hold the same theological perspectives as many Black Protestants, that is, a keen awareness that Jesus' call supersedes the limitations of nation, race or a political party. Often as I read the works of James Cone, who is often called the "father of Black theology," I am struck by how his theological insights resemble conversations about faith I have with my Black Catholic friends. 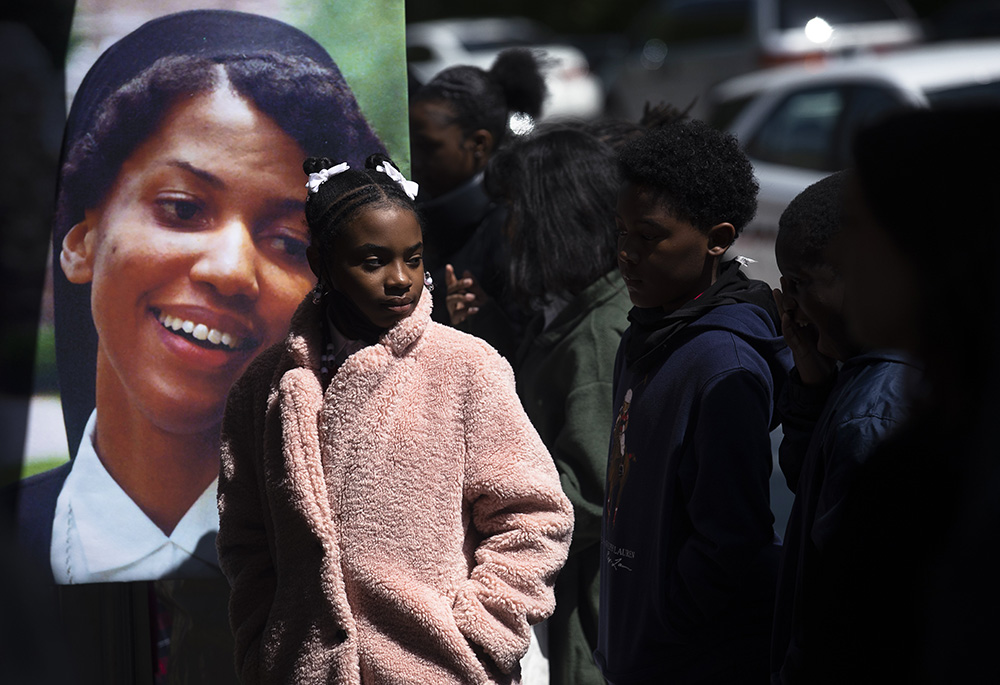 Students from St. Anthony Catholic School in Washington attend the dedication and blessing of Sister Thea Bowman Drive at The Catholic University of America April 29. Bowman, who died in 1990, is one of six Black Catholics who are candidates for sainthood. Her sainthood cause was opened in 2018 and she has the title "Servant of God." (CNS/Tyler Orsburn)

The 3 million Black Catholics in America represent a rich source of theological reflection and praxis. We can see it in the life of Daniel Rudd, founder of the first Black Catholic newspaper (American Catholic Tribune), who in 1888 planted the seeds of what later became the National Black Catholic Congress. It is evident in Franciscan Sr. Thea Bowman's preaching and singing before the U.S. Conference of Catholic Bishops in 1989, a presentation that illuminated the gift of Black Catholicism. It is seen in the life of Dr. Lena Edwards, a third order Franciscan whose medical work among the poor was recognized in her 1964 receipt of the Presidential Medal of Freedom.

Black Catholic voices are rising in prominence as writers such as Gloria Purvis, Olga Segura and others ask us to look anew at racial justice and the church. The forthcoming book by Shannen Dee Williams, Subversive Habits: Black Catholic Nuns in the Long Freedom Struggle, will open hearts and minds to the witness of Black religious life. The writings of theologians Diana Hayes, M. Shawn Copeland, Fr. Bryan Massingale* and many others attest to the deep rivers of Black Catholic thought.

There is more, for often unrecognized are the many African American activists, writers, theologians and others who are influenced by Catholicism. While not Catholic themselves, they embrace Catholic spirituality and social teaching in their life work.

Years ago, I heard feminist writer bell hooks (who is much more than that descriptor) address a small university gathering. She gave a compelling presentation about how America is patriarchal, capitalist, racist and violent, and we are either perpetuators or victims of that system. Her call was that we not focus on who is the perpetuator or the victim, but our true calling is for all to take responsibility to dismantle and transform that system. Bell hooks later went on to say that her perspectives, activism and prayer life were influenced by retreats at a Catholic monastery.

Indeed, her book, All About Love: New Visions, includes quotes by Catholic monk Thomas Merton, descriptions on mystical prayer by St. Teresa of Ávila and other obvious Catholic references. These and many other examples reveal the influence both of Black Catholics and African American activists influenced by Catholicism. Our society overlooks those deep rivers of spirituality and practice to our collective detriment.

This could indicate that most Black Catholics see their faith, and God, as their unifying element. There is no wrong in worshiping among those who look like you. Yet the Scriptures are clear that our union in Christ surpasses differences of class, race, status or nation. In fact, John's Gospel records Jesus praying that the oneness of his followers be the definitive sign of his mission and God's love.

Christianity in America, for the most part, has been incapable of bridging the racial divide. It could be said that Black Catholics heard the message of oneness in Christ and have chosen to participate in weekly Masses with people of different races. For them, the God revealed in the assembly, the sacraments, the Scriptures and prayers, is more defining than the race of those they worship with. 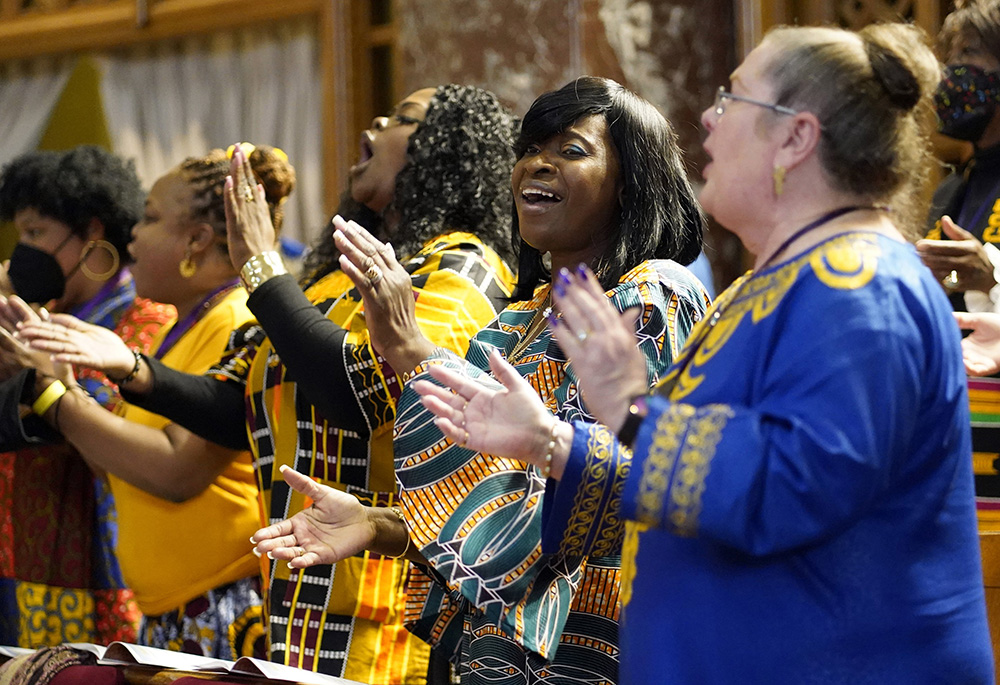 Members of a gospel choir named for Sr. Thea Bowman sing during a Black History Month Mass of thanksgiving at Immaculate Conception Church Feb 20 in the Jamaica Estates section of the New York borough of Queens. (CNS/Gregory A. Shemitz)

When I was in the master's program at Seattle University School of Theology and Ministry, one of my projects included interviews with Black Catholics who experienced flagrant racism and yet remained faithful to their church.

I spoke with Black Catholics who had been made to stand in the rear or were relegated to the balcony, and others who suffered indignities and slurs from racist priests. Some mentioned priests who refused to perform services, such as burial, for their Black members. The obvious question is why they would remain in an assembly that denied their full humanity. This question is even more pronounced as they could have joined a Black church and been celebrated and accepted.

Their answer, to a person, was they believed they found God in the Catholic Church, that their experience of God was confirmed and strengthened through the sacraments, teachings and prayers of the church. They concluded that no human, however racist and flawed, would keep them from experiencing God.

The Pew Research study, in noting the number of Black Catholics and that the overwhelming majority participate in churches where other races are a numerical majority, has hinted at the richness, depth and in fact necessity of Black Catholic devotion. It, along with the appointment of Cardinal Wilton Gregory as the country's first Black cardinal and the ongoing lived experience and witness of 3 million Black Catholics, enables us to look anew at the deep river that is Black Catholic spirituality.

*This article has been edited to remove an incorrect reference to a religious order. Massingale is a priest of the Archdiocese of Milwaukee.

A version of this story appeared in the June 10-23, 2022 print issue under the headline: Black Catholic spirituality.