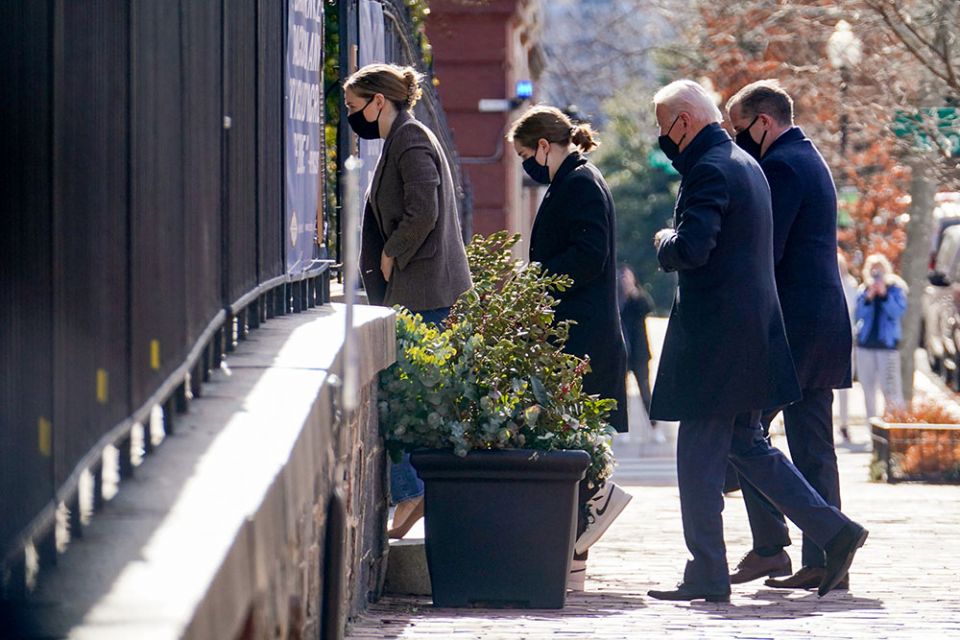 The inauguration of Joe Biden, the nation's second Catholic president and a regular churchgoer, not surprisingly resulted in a slew of secular media coverage of the president's faith, as religion reporters seem to breathe a sigh of relief that the new commander in chief actually practices religion, rather than crassly abuses it.

Biden's invitation of Washington Cardinal Wilton Gregory to pray at an Inauguration Day eve memorial to honor those who have died of COVID-19, combined with his decision to start Jan. 20 with morning Mass at the Cathedral of St. Matthew the Apostle, set the tone for what portends to be a pious, or at least prayerful, presidency.

And the religious leaders who participated in inauguration-related events highlighted a drastic difference from the previous administration. Instead of New York Cardinal Timothy Dolan (who continued to refer to Donald Trump as a "great gentleman" even as his presidency imploded), Biden chose a Jesuit former head of Georgetown University to give the inaugural invocation.

The post-inaugural prayer service line-up also was illustrative: Evangelical prosperity gospel preachers were replaced by two Catholic sisters — one who helped get the Affordable Care Act passed, another who works with immigrants at the border — as well as two transgender faith leaders and the chair of the Poor People's Campaign, among others.

This prompted several writers to trumpet the "ascendency" or "elevation" of liberal Catholicism or liberal Christianity — with the unspoken flip side being the descent of conservative evangelicals, and their Catholic counterparts.

While I'm sure progressives are grateful for the attention, I also want to say: Folks, we've been here all along.

New York Times columnist Ross Douthat — himself a member of the Catholic conservative crowd — describes the history this way: Liberal Catholics were a thing in the late 1960s and '70s, but have been in decline ever since, only to get another chance recently with the papacy of Francis.

Suppressed? Well, some have surely tried.

I can't deny that a certain contingent of conservative Catholics and their well-funded organizations have accumulated quite a bit of power in the U.S. church during the past two decades. Many of those organizations have been modeled on evangelical Protestant ones, and a good number of the individual conservatives are converts from evangelicalism. In addition, a majority of men who choose priesthood these days could be described as "rad trads," and the U.S. bishops' conference, too, has taken a hard turn to the right.

But progressive Catholics have been here all along. They are the gray-haired old-timers at church reform organizations and parishes. They are the young Catholics taking their first theology course at a Catholic college or university — and the theologians teaching those classes. They are the retired priests, sisters and even some bishops who have spent their lives working for social justice. They are Women's March marchers, Green New Deal supporters and Black Lives Matter protesters across generations.

They are you: NCR's longtime subscribers, our new online readers and members.

Many of them used to consider themselves moderate, but as the hierarchy went farther to the right, the center shifted. What used to be moderate in Catholic circles is now called "liberal," and the truly liberal, the far left? They, well, left — or at least left any official churchgoing, envelope-contributing practice of the faith. But they're still Catholics.

But now one of the most public faces of Catholicism in this country will match those majorities in the polls. To be Catholic will not automatically equate with being Republican and only anti-legalized abortion. It will mean caring about immigrants, the poor, climate change and racial justice — and babies.

To be sure, the election of Biden will not automatically mean that conservative Catholics will throw up their hands in defeat. In fact, if the Inauguration Day statement from the U.S. bishops' conference head, Archbishop José Gomez, is any indication, they plan to keep fighting.

Nor will conservative evangelicals disappear, and I suspect religion writers will quickly be back to focusing on them and their leaders, who after all tend to do things that warrant headlines.

But with a so-called liberal Catholic in the White House, expect to see more coverage of homilies like the one Joe Biden heard at his first Sunday Mass as president, in which a Jesuit priest blasted the death penalty and encouraged a consistent ethic of life.

We have been covering liberal Catholics all along and will continue to do so.

A version of this story appeared in the Feb 5-18, 2021 print issue under the headline: Liberal Catholicism: We've been here all along .

Opinion | Liberal Catholicism: We've been here all along

Paul VI accused Archbishop Lefebvre of acting like an 'antipope'

Your thoughts on Catholic voters for Trump