Paying the price for anti-racism work 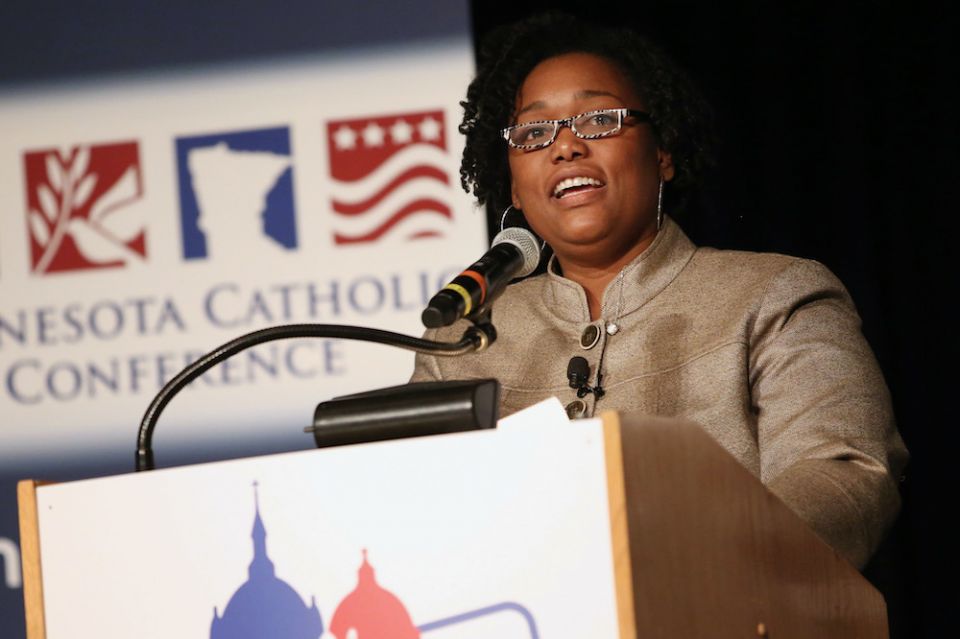 Last month, I watched a video presentation on racism hosted by the Initiative on Catholic Social Thought and Public Life at Georgetown University. So did more than 6,500 other viewers.

Most were there to hear what Washington D.C. Archbishop Wilton Gregory would say — just days after his statement condemning President Donald Trump's controversial visit to the St. John Paul II Shrine for a photo op.

But another panelist at the June 5 Georgetown event, titled "Racism in Our Streets and Structures: A Test of Faith, A Crisis for Our Nation," caught my attention, in part because she works for the Eternal Word Television Network — whose connections to conservative money and anti-Pope Francis factions have been the subject of past investigative pieces in NCR.

Gloria Purvis, a host of EWTN's radio show "Morning Glory," is a passionate anti-abortion activist. During the Georgetown event, I learned she uses her voice for other life issues, too, including racism.

Sharing her visceral reaction to seeing the video of the killing of George Floyd at the hands of a Minneapolis police officer, Purvis said "it nearly broke me" to hear him call for his mama.

"For people who are pro-life and don't yet understand it, perhaps let me put it to you like this: It's like watching an abortion being performed and you can do nothing. And that should be horrifying and upsetting to anybody," she said.

The day after Juneteenth, after Purvis had shared dark-skinned images of Jesus, Mary and King David with her 10,000 Twitter followers, she was being criticized on the social media platform for using the Christian faith to "pump up her own black identity politics."

For EWTN host Gloria Purvis, the Christian faith appears to be a means to pump up her own black identity politics. This is racist and childish. It certainly isn't Catholic. https://t.co/qKvIzLPz9S

But it was her tweet of support for major reform of policing — sometimes called "defunding the police" and mistakenly misinterpreted as synonymous with abolishing the police — that incensed the right-wing website Church Militant, which quoted followers who accused Purvis of aligning herself with Marxists and the new right's boogeyman, Antifa.

#MorningGlory discusses #defundpolice. We agree reform is not a problem and that the name defund police isn’t the best one. Subsidiarity, common good, public safety all should guide discussions on public safety.

Within a few days, the Texas-based Guadalupe Radio Network — the largest EWTN radio affiliate in the U.S. — had pulled the weekday "Morning Glory" show, a move they later said was "temporary" because of a "spirit of contention" growing among the hosts live on-air, according to a press release.

"Never before have we received as many complaints about any EWTN show as we have about Morning Glory as of late. Our efforts to try and correct the situation before were not successful. So, we felt we had no other option other than to temporarily suspend airing this program," the press release said.

Guadalupe Radio is owned by the Promesa Foundation, which, according to its latest tax documents, takes in $4.7 million a year in donations and grants to acquire radio stations to provide Catholic programming in Midland, Texas, and other cities in the state.

In its statement, Guadalupe Radio was emphatic in its denial that the temporary suspension had anything to do with Purvis' discussions of the "evil of racism."

"We are not bothered in the least that 'Morning Glory' took on the difficult, but needed, topic of the evil of racism," the press release said, attributing "unfounded and uncharitable accusations" about the network to "Satan …the father of lies."

Methinks they dost protest too much.

Purvis, in her own statement, said she won't back down. "I will continue to speak the truth about the human person and that includes discussing racism and other evils," she wrote June 26.

"Not everyone will receive the message joyfully and there will be opposition but because I love Jesus and believe in the beauty and truth of His message, I will persevere."

At least two bishops — including Bishop Michael Sis of the San Angelo, Texas Diocese, which includes Midland, and Archbishop Samuel Aquila of Denver — expressed support for Purvis on Twitter.

"I hope the beloved Morning Glory program with Gloria Purvis and others will soon return to the [Guadalupe Radio Network]," Sis tweeted. "As we confront the sin of racism, we must fully acknowlege [sic] the hurt and injustice, listen in a spirit of mutual respect, and seek more just and constructive ways to live together."

I hope the beloved Morning Glory program with Gloria Purvis and others will soon return to the GRN. As we confront the sin of racism, we must fully acknowlege the hurt and injustice, listen in a spirit of mutual respect, and seek more just and constructive ways to live together.

In an unpublished interview with NCR's national correspondent Christopher White, Purvis said she was told Guadalupe was "no longer happy with the direction of the show" but that EWTN would continue to air it.

Refusing to be stopped by the racist hate mail she has received, Purvis said her goal is to talk about racism from the perspective of faith. "Our country is now having to deal with what many of us have known for a long time with this issue. It has bubbled up to the top, and no longer can people turn their eyes away," she told White. "And why should they? If we say we want to build a culture of life, well, this is a part of that and we have to get involved."

Purvis told White: "I'd rather be talking about gin and tonics and cigars and something fun, but that's not what it is to be a disciple."

A version of this story appeared in the July 10-23, 2020 print issue under the headline: Paying the price for anti-racism .

Our morally unserious president on display in Kenosha