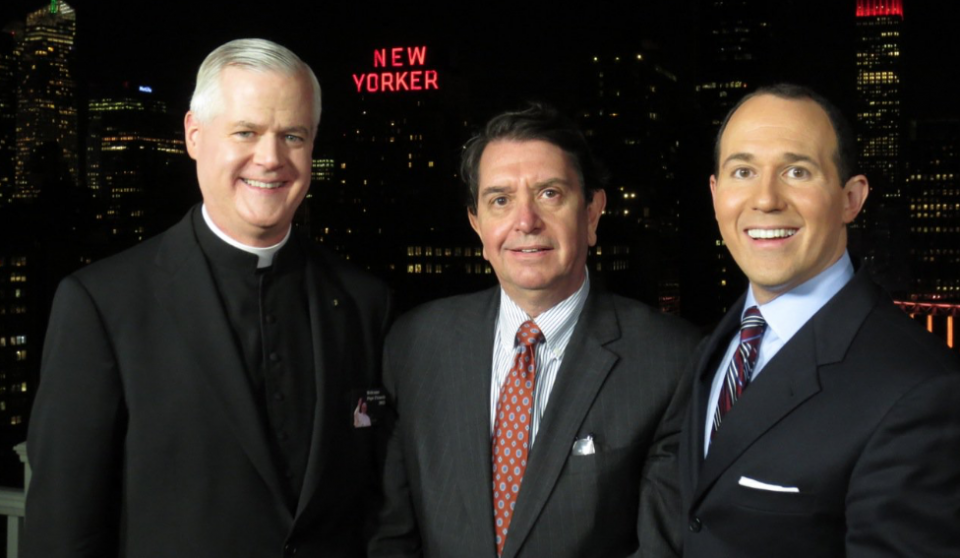 This series represents a continuation of NCR's look at the effect of money, largely making its way through the expanding and uniquely American non-profit system, on the Catholic narrative both inside the church and beyond. EWTN is one of the major vehicles for that narrative. NCR delves into the development of the network that now has a truly global reach and includes several print publishing arms as well as the TV enterprise. This is Part Two. Part One can be read here. Part Three can be read here. Part Four can be read here.

After more than a century of secret machinations, a group of Freemasons and Communists —aided by liberals, modernists and a mafia of reforming church leaders — are able to subvert the Catholic Church from within, including electing a corrupt pope, all as part of a diabolical plot for world domination.

The latest Dan Brown novel? No, it is the thesis of Infiltration: The Plot to Destroy the Church from Within, by radical traditionalist Taylor Marshall. The so-called "scholarly" book made it to the No. 1 spot in several categories on Amazon, including Christian Church History, shortly after its release in May.

The book is so full of conspiracy theories that even conservative Catholic media are panning it. A co-founder of Christendom College called it "An idiot's guide to the problems of the church," and Catholic World Report bashed it for its "appalling lapse of scholarship and judgement."

The book's publisher turns out to be a small Catholic press that is affiliated with the Eternal Word Television Network, best known for its cable television channel but also the owner of a radio station and broadcasts, a newspaper, two online news services, a religious goods catalog and a book publishing arm.

A truly global media empire that has given favorable coverage to Republican politicians and the Trump White House, EWTN also is the media star in a web of connections among wealthy conservative Catholics donors and even some anti-Pope Francis extremists.

Sophia Institute was founded in 1983 by John Barger, a philosophy professor and former agnostic at Magdalen College in New Hampshire,* and one of his former students Paul DiIulio.

In 2011, Sophia Institute became the publishing arm of two other colleges: Thomas More College of Liberal Arts in New Hampshire and Holy Spirit College in Atlanta, the latter founded by EWTN board member and donor Frank Hanna III through his Solidarity Association. All three schools are known as traditionalist Catholic.

EWTN COO Burke, who formerly served as executive director of the National Catholic Register newspaper before it was acquired by EWTN, used to work for the evangelical organization Focus on the Family. Jewish by birth, he became a Southern Baptist, then an Anglican, before joining the Catholic Church, according to a profile of him by Legatus, an organization for wealthy Catholic business leaders.

He also is the founder of the Avila Institute for Spiritual Formation, an online educational program that says it is "proudly unaccredited" so it can attract "the right kind of student." Charlie McKinney, current president of Sophia Institute, is an Avila board member, as is Bishop Robert Baker of Birmingham, Alabama, home of EWTN's headquarters.

Sophia Institute's mission statement says it is to publish books "in conformity with the authentic teachings of the Roman Catholic Church." That apparently includes books about those trying to take down the current pope. And Infiltration is not an atypical book for the press.

Among its summer releases is Viganò vs. Vatican: The Uncensored Testimony of the Italian Journalist Who Helped Break the Story— although that subtitle doesn't give fair credit to author Marco Tosatti, who has admitted that he actually helped Archbishop Carlo Maria Viganò write last summer's now-infamous letter that accused Pope Francis of covering up sexual abuse by former Washington Archbishop Theodore McCarrick and demanded that the pontiff resign. 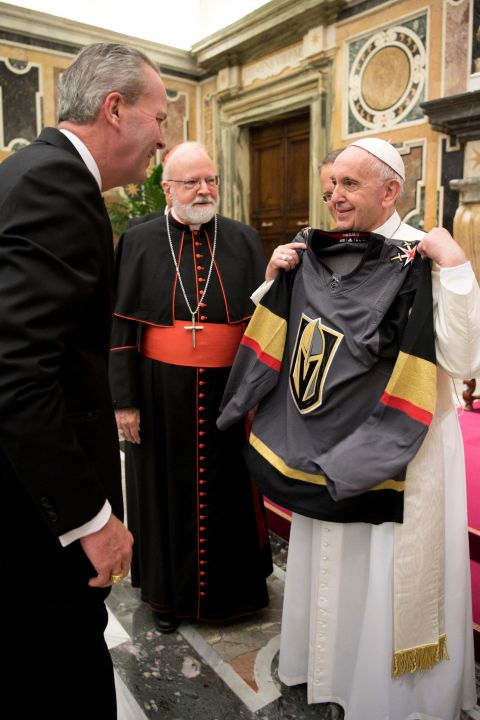 Pope Francis accepts a jersey from Timothy Busch during an audience with members of the Papal Foundation May 10 at the Vatican. Looking on is Cardinal Sean O'Malley of Boston. The group of mainly U.S. donors has given millions of dollars since 1990 to support charitable initiatives of the pope. (CNS/Vatican Media)

Although the Viganò book is not garnering the gangbuster sales of Infiltration, its publication confirms another link between EWTN and the former papal nuncio, who continues to make headlines with attacks against Francis about the Vatican's handling of sexual abuse while he gives previous popes a pass.

Last summer, Viganò reportedly shared his plan for his first letter with EWTN board member Timothy Busch, according to the New York Times. Although Busch later denied it, the Times stood by its reporting. (Busch and the Napa Institute have other connections to some of the harshest critics of Pope Francis, including Cardinal Raymond Burke, despite Busch's protestations that the institute does not have some "master plot to overthrow the papacy.")

The Viganò letter was released through several conservative Catholic news outlets, including EWTN's National Catholic Register. In fact, the Register has become a regular vehicle for breaking such pronouncements from church leaders on the right, including a manifesto by Francis critic German Cardinal Gerhard Müller, released just before the February Vatican summit on clergy sexual abuse. (The former head of the Congregation for the Doctrine of the Faith did not have his term renewed by Pope Francis.)

In the manifesto, Müller blasted the current "dictatorship of relativism" — a theme also common in his appearances on EWTN. In a 2018 interview on the news magazine show "The World Over," Müller decried "the contradiction of doctrine" he sees in the church today. He also attributed sexual abuse by clergy to a "breakdown of moral principles" in society, said he "knew nothing" about sanctions against McCarrick and implied that people close to Pope Francis had undercut the CDF's ability to investigate allegations of sexual abuse.

It was precursor to an even more alarming manifesto to come in April from none other than retired Pope Benedict XVI, whose 5,500-word scathing indictment of the current sex abuse crisis was released through not only the Register but also EWTN's Catholic News Agency. Benedict's screed — which many found embarrassing — blamed the sex abuse crisis on the sexual revolution and modern society's secularism.

Some critiques of Francis have come close to sedevacantism, a theory that there has been no valid pope since the Second Vatican Council. Some contemporary sedevacantists hold that Francis is illegitimate because of his "heresies," such as those detailed in a May 2019 open letter to the College of Bishops.

Several signers of that letter, while insisting they are not technically sedevacantists, have connections to EWTN, such as Brian McCall of Catholic Family News, who has been a guest on an EWTN radio show, and traditionalist liturgist Peter Kwasniewski, who has been interviewed on EWTN Live.

While these connections with EWTN are somewhat ironic, given the network's history and insistence on orthodoxy, the alliances are being noticed by commentators, if not unsuspecting viewers.

The rhetoric against Francis is unprecedented in the past two centuries, said Jesuit Fr. Mark Massa, director of the Boisi Center for Religion and American Public Life at Boston College, who studies religion and history.

"This is stirring up a pot, which if it boils over, may very well be guilty of schism," he said.

"They're really afraid of Francis' reform efforts and are willing to do almost anything, or align themselves with anyone, to stop him," Massa added. "They're complaining about division in the church, but quite honestly they're the people sowing division."

Nowhere is that division more blatant than on a recurring segment of "The World Over" called "The Papal Posse," featuring EWTN anchor Raymond Arroyo (who also has a gig at Fox News), Robert Royal of the Washington-based Faith and Reason Institute, and Archdiocese of New York priest Fr. Gerald Murray, a former U.S. Navy chaplain.

The segment has become little more than a Vatican-bashing roundtable, whether of Francis' strengthening of Catholic teaching on the death penalty, the pope's handling of sex abuse or the Synod on Young People, the Faith and Vocational Discernment (or even the synodal process itself). Not surprisingly, they don't like the working document for the Amazon Synod either.

Burke, who is scheduled to headline this summer's Napa Institute, recently joined Arroyo on "The World Over" to discuss accusations of Vatican mishandling of sexual abuse allegations, while later in the May 30 program, George Weigel of the Ethics and Public Policy Center used his half-hour appearance to discredit as "rubbish and poppycock" the idea that wealthy Americans are going after Pope Francis because of his critiques of unfettered markets and racist anti-immigration sentiment. 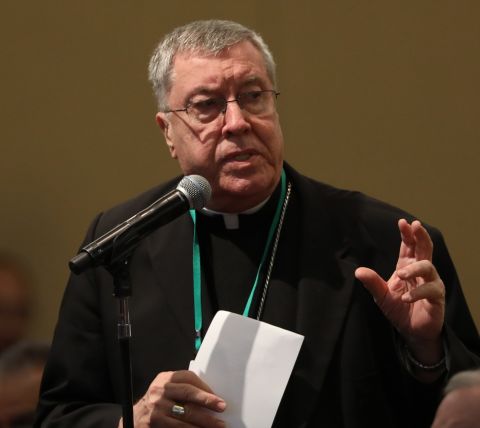 Bishop Robert J. Baker of Birmingham, Alabama, speaks from the floor on the first day of the spring general assembly of the U.S. Conference of Catholic Bishops in Baltimore June 11, 2019. (CNS photo/Bob Roller)

All this pope-bashing has not gone unnoticed by some in the hierarchy.

More than one prelate has publicly criticized Arroyo in the past year. In a tweet, Bishop Rick Stika of Knoxville, Tennessee, called Arroyo's reporting "biased," "deplorable" and "fake news," after the anchor seemed to take the side of removed Memphis Bishop Martin Holley during an interview. South African Cardinal Wilfrid Napier also denounced Arroyo on Twitter, comparing him to anti-Catholic Northern Ireland radicals.

Of course, the bishop with the closest relationship to EWTN is the one who oversees the diocese where the network's headquarters are located. Bishop Robert Baker, who has headed the Birmingham diocese since 2007, serves on the network's board of governors.

In 2009, Baker called Notre Dame's decision to invite President Obama to speak at graduation "a travesty to the legacy of Catholic education," and has called for politicians who support abortion to be denied Communion.

He has been a supporter of the Latin Mass; shortly after being assigned to Birmingham in 2007, he lifted the ban by previous Bishop David Foley on ad orientem Masses (in which the priest's back is to the congregation). He requires chastity education for all Confirmation candidates and recommends Family Honor Inc., a chastity program using the controversial Theology of the Body view of human sexuality.

After the Pennsylvania grand jury report in August 2018, Baker attributed clergy sexual abuse to lust and a lack of chastity, especially the accusations of "predominately homosexual behavior and abuse."

The diocese is celebrating its 50th anniversary this year, but another important date may be even more meaningful for the diocese — and EWTN. On June 4, Baker turned 75, the age at which bishops submit their resignations to the Holy See. There has not yet been news of its acceptance, but he told local news a replacement bishop would be expected in six months to a year.

* This article has been updated to correct the location of Magdalen College.

A version of this story appeared in the Aug 9-22, 2019 print issue under the headline: EWTN: connected to conservative, anti-Francis elements .

On Pope Francis, EWTN and cracking down on criticism

Pope denounces 'rigidity' as he warns of Christian decline