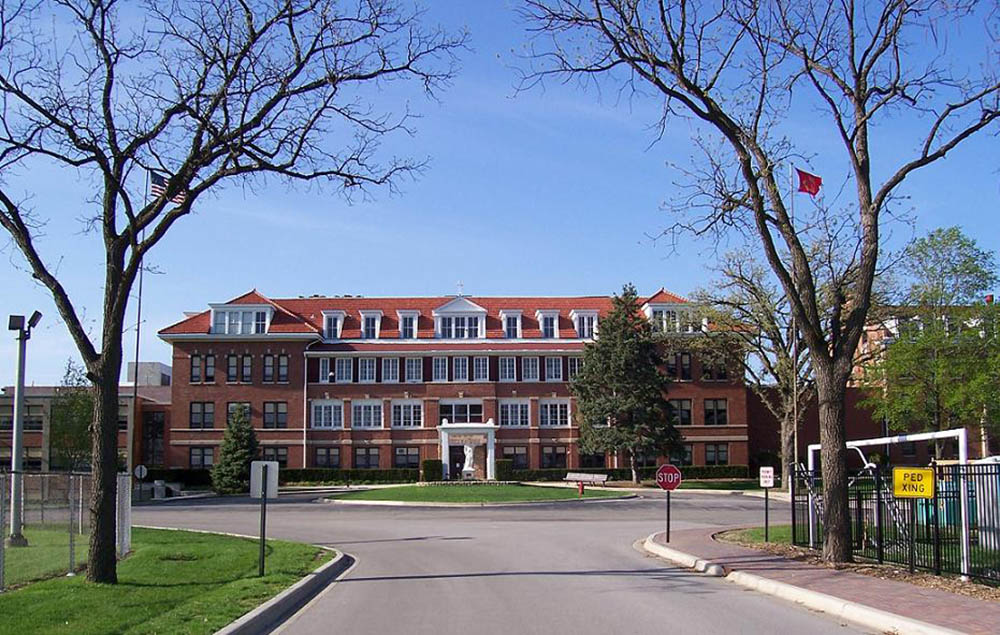 St. Joseph Hall on the campus of Benet Academy in Lisle, Illinois (Wikimedia Commons/Benny the mascot)

In my decadeslong career in Catholic journalism, it seems there are some stories I've had to write or edit over and over: ones about sexual abuse or assault, or about conflict between a progressive parish and its young conservative priest, or about a school or other Catholic organization firing an LGBT employee.

So when my sister texted me last month with the news that the Catholic high school her three now-adult children had attended had rescinded a job offer to a lacrosse coach after the woman put her wife down as her emergency contact, I was hardly surprised.

"Happens all the time," I told my sister, who noted that students, parents and alumni had started a petition and gone to the media with their support for the coach.

I assured her that happens all the time, too.

But what doesn't happen all the time is that the school, Benet Academy in suburban Chicago, reversed its decision and again offered the coaching job to Amanda Kammes, who accepted it.

In a statement announcing the decision, the school's board said it hoped it would be the "first step in healing the Benet community."

"Going forward we will look for opportunities for dialogue in our community about how we remain true to our Catholic mission while meeting people where they are in their personal journey through life," the statement said.

I asked Francis DeBernardo, executive director of New Ways Ministry, an advocacy group for LGBTQ Catholics that keeps a database of employees who have lost jobs over their sexual orientation, if he knew of any other protests that had been successful in getting an employee reinstated.

He could recall only one: In 2015, students, alumni and parents from St. Mary's Academy in Portland, Oregon, protested when the school pulled a contract that had been offered to a counselor after learning she was a lesbian. The school not only reinstated her, but expanded its employment policies to welcome gay staff and administrators.

DeBernardo hadn't been in touch with anyone at Benet, but expressed hope that Catholic schools might be beginning to realize that firing employees over their sexual orientation hurts the institution in the long run — not to mention the LGBTQ students in their care.

"I would hope, too, that these administrators are also beginning to follow Pope Francis' example of not being exclusionary towards LGBTQ people," DeBernardo said. "More U.S. bishops are starting to get that message and perhaps it is trickling down to Catholic administrators."

Yet school principals, presidents and board chairs often have to navigate competing visions of how to stay true to their Catholic values and mission. Such tension was evident in Benet's initial email to families about the lacrosse coach:

Benet Academy respects the dignity of all human beings to follow their conscience and to live lives of their choosing. Likewise, as a Catholic school, we employ individuals whose lives manifest the essential teachings of the church in order to provide the education and faith formation of the young people entrusted to our care.

Yet he believes that respecting dignity includes recognizing that employees don't sign away all their privacy rights when they sign a contract at a Catholic school, he told me in an email interview. And while Seattle Prep's employment policies also require employees to respect "fundamental Catholic, Jesuit teachings," Hickey sees love of God and neighbor as at the core of those teachings.

"Give me a teacher more like St. Francis, one who preaches the gospel at all times, using words when necessary. That preaching in the classroom (or on the playfield) should include genuine expressions of care, upholding the sacredness of the person, and building up the Body of Christ in Christian community," Hickey said. "That's the high bar we should be trying to reach. Those are the essential teachings upon which that lacrosse coach should be hired or fired."

While Hickey's approach is to be lauded, employees with less open-minded administrators usually have little legal recourse. Courts have tended to support the "ministerial exception" that allows religious institutions to be exempt from anti-discrimination and other employment protections, although a federal judge's ruling last month in favor of a gay substitute teacher fired by Charlotte Catholic High School in North Carolina indicated some limitations to that exception.

But it turns out that it's even too early to celebrate at Benet.

Just days after the announcement of Kammes' rehire, Benedictine Abbot Austin Murphy of St. Procopius Abbey — which oversees Benet — said in a statement that he was "deeply troubled" by the decision.

Murphy noted that "honest disagreements about the morality of homosexual acts should not be construed as hate" and said he would be "taking this matter to prayer and discerning how to proceed."

A version of this story appeared in the Oct 15-28, 2021 print issue under the headline: Is the tide turning on LGBT firings?.