The all-male priesthood finds itself in another scandal 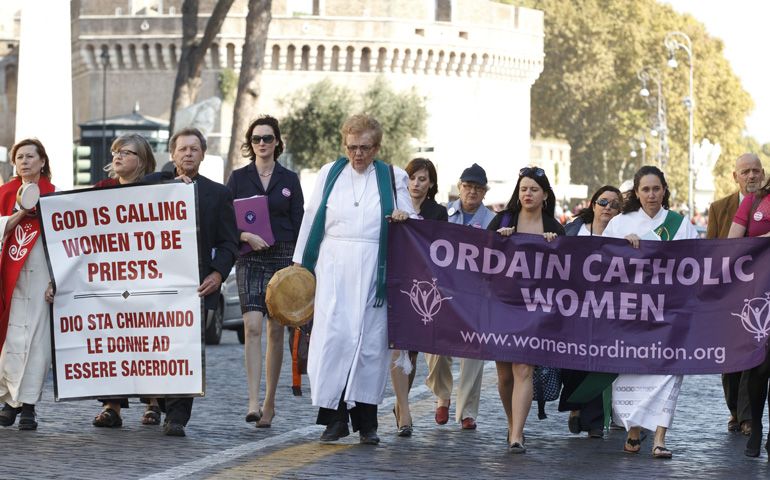 Roy Bourgeois (third from left), a censured Maryknoll priest, joined a demonstrate in support of women's ordination in Rome near the Vatican in October 2011. Some in this group were detained briefly by Italian police outside St. Peter's Square during the demonstration. (CNS/Paul Haring)

As a Catholic priest, I did the unspeakable.  I called for the ordination of women in the Church.  The Vatican was swift in its response.  The Congregation for the Doctrine of the Faith informed me that I was “causing grave scandal” in the Church and that I had 30 days to recant my public support for the ordination of women or I would be expelled from the priesthood.

I told the Vatican that this was not possible.  Believing that women and men are created of equal worth and dignity and that both are called by an all-loving God to serve as priests, my conscience would not allow me to recant.  In my response, I felt it was also important to make clear that when Catholics hear the word “scandal,” they think about the thousands of children who have been raped and abused by Catholic priests — not the ordination of women.

In 2010, the Vatican called the ordination of women as priests a crime comparable to that of the sexual abuse of children.  Judging from its actions, however, it would appear that the Vatican views women’s ordination as a crime substantially more serious than child abuse.  Among the thousands of priests who raped and sexually abused children, the vast majority were not expelled from the priesthood or excommunicated.  Every woman, however, who has been ordained to the Catholic priesthood has been excommunicated by the Vatican.

And in 2012, after serving as a Catholic priest with the Maryknoll Missionary Order for 40 years, I was expelled from the priesthood for refusing to recant my public support for the ordination of women.

Today, once again, scandal is rocking the Catholic Church.  This time, it’s six Catholic dioceses in Pennsylvania.  According to a grand jury report, beginning in the 1950s, more than 300 “predator priests” sexually abused more than 1,000 children.

The 1,400-page report, written by 23 grand jurors over the course of two years stated that “Priests were raping little boys and girls, and the men of God who were responsible for them not only did nothing; they hid it all. For decades.”  Among the horrific crimes committed by Catholic priests:

The Pennsylvania grand jury report concluded that the Catholic hierarchy “protected the institution at all cost and maintained strategies to avoid scandal.” Priests who got into trouble in one diocese were shuffled to another diocese where more children were abused.  The FBI determined that Church officials followed a “playbook for concealing the truth,” minimizing the abuse by using words like “inappropriate contact” or “boundary issues” instead of “rape.”

Opinion | The all-male priesthood finds itself in another scandal

Do your part for the common good: Get vaccinated